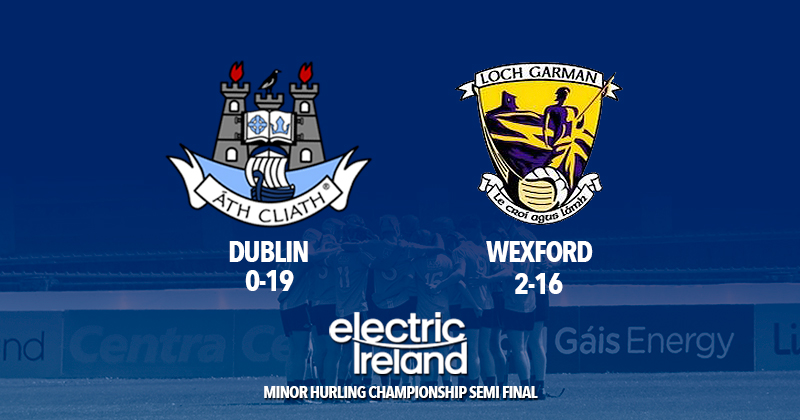 The goal of retaining their Leinster Minor Hurling Crown came to a premature end yesterday as Mike Connolly’s Dublin side failed to secure their Championship Final slot.

Wexford came to Parnell Park and made Dublin pay the price of a slow start. Goals from AJ Redmond and Dylan O’Neill had Dublin playing catch up and need a massive second half.

The Slaneysiders were certainly sharper in the opening exchanges, dominating the breaking ball. Corner forward Redmond hardly put a foot wrong throughout reeling off 1-06 from dead ball chances in the opening half. In the eighteenth minute he rocketed a ball from a 20 metre free into the net to give his side a 1-07 to 0-03 lead over the Dubs.

Conor Murray scored too points from play, with Dublin relying heavily on the free taking of Ben McSweeney. And things could have been different had Dara Purcell’s seventh minute goal attempt not been stopped by Wexford keeper Cian Byrne. Brendan Scanlon also had a perfect opportunity to raise a green flag but he watched as his shot agonisingly hit the upright.

Two first half goals kill the game for Dublin

In the 29th minute things got worse for the home side as Wexford netter a second time. Richie Lawlor’s shot was stopped by Dublin keeper Eoin O’Connor but Dylan O’Neill was just waiting help the ball over the line. The half ended at 2-10 to 0-07 with another McSweeney conversion and Murray’s second from play.

There was certainly a better showing from Dublin following the break but the deficit was always going to be a tall order. They had a huge amount of possession around the Wexford goal, but they couldn’t deliver a much needed three pointer. The best of the chances came from substitute Charlie Keher who was played on by Dara Purcell but the shot went upward and over the crossbar.

Despite trailing, Dublin pushed Wexford right to the final whistle but the Slaneysiders first half tally carried through the rest of the game and of course through to this year’s Leinster Final. They’ll face Kilkenny, who were victorious over Kildare in the other last four clash.