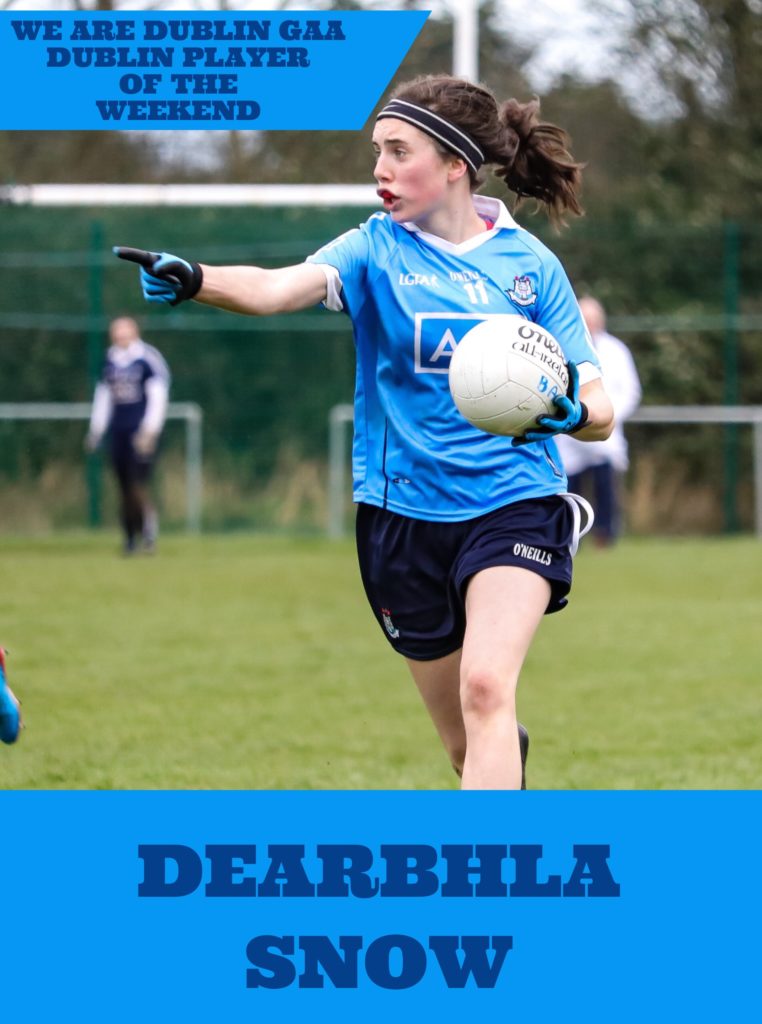 Another week has flown by and it’s that time to name this weeks winner of the We Are Dublin GAA, Dublin Player Of The Weekend.

For any of our new followers who don’t know why this is, it’s a weekly award given to the Dublin player that we feel was the standout player from the previous weekends inter-county action.

We had plenty of games from Ladies and Men’s football and Camogie to choose from last weekend and a number of players in contention.

As usual it’s a difficult choice to whittle it down to just one player but the contribution by one player that drove their team to victory impressed the most.

So we are delighted to announce that the winner of this weeks We Are Dublin, Dublin Player Of The Weekend is DEARBHLA SNOW.

Last Saturday afternoon in a very wet and windy St Margaret’s GAA club, the Dublin Minor Ladies Footballers got the defence of their Leinster title underway.

First games out in a pure knockout competition can be tricky but Dearbhla above others made sure it wasn’t going to be anything but a Dublin victory.

From the off the Fingallians player looked lively and used clever runs into space to receive the ball and orchestrate the attack with a combination of incisive runs and clever and accurate offloads.

Dearbhla is a player who plays with her head up and is always aware of what is happening all around her. On Saturday she used that vision to great effect creating numerous scoring opportunities for herself and her team and had a hand in all that was good in Dublin’s attack.

In what was a tight and tense first half Dearbhla popped a fine point just before the break to give Dublin a two point lead. But it was in the second half that she shone even brighter, again she was the main fulcrum in many of the young Dubs play but she also showed she is far more than just a playmaker and hit five vital points in the second period to cap off an all round brilliant display.

So congratulations Dearbhla you are the very deserving recipient of this weeks We Are Dublin GAA, Dublin Player Of Weekend Award.