An outstanding performance by Cathy Brock propelled the Blue Team towards an accomplished 13-point victory over the Navy Team in Sunday’s New Ireland Assurance Junior Dub Stars Challenge at the DCU Sportsgrounds.

The Cuala attacker finished with an astonishing personal tally of five goals to round off an excellent individual display at the St Clare’s venue.

First-half substitute Lauryn Campbell (Fingallians) also chipped in with 1-3 for the Blues, who held off a spirited second period showing from their Navy counterparts to secure the silverware on offer.

Her ferocious second-minute effort rebounded off the left-hand post, before ending up in the net off the foot of unfortunate opposition netminder Niamh Kirby.

Despite this early set-back, however, the Navys subsequently reduced their deficit to the bare minimum. Following a breakthrough score for midfielder Roisin McDonald, skipper Aoife Caffrey split the posts at the end of an extended move inside the opposing half. 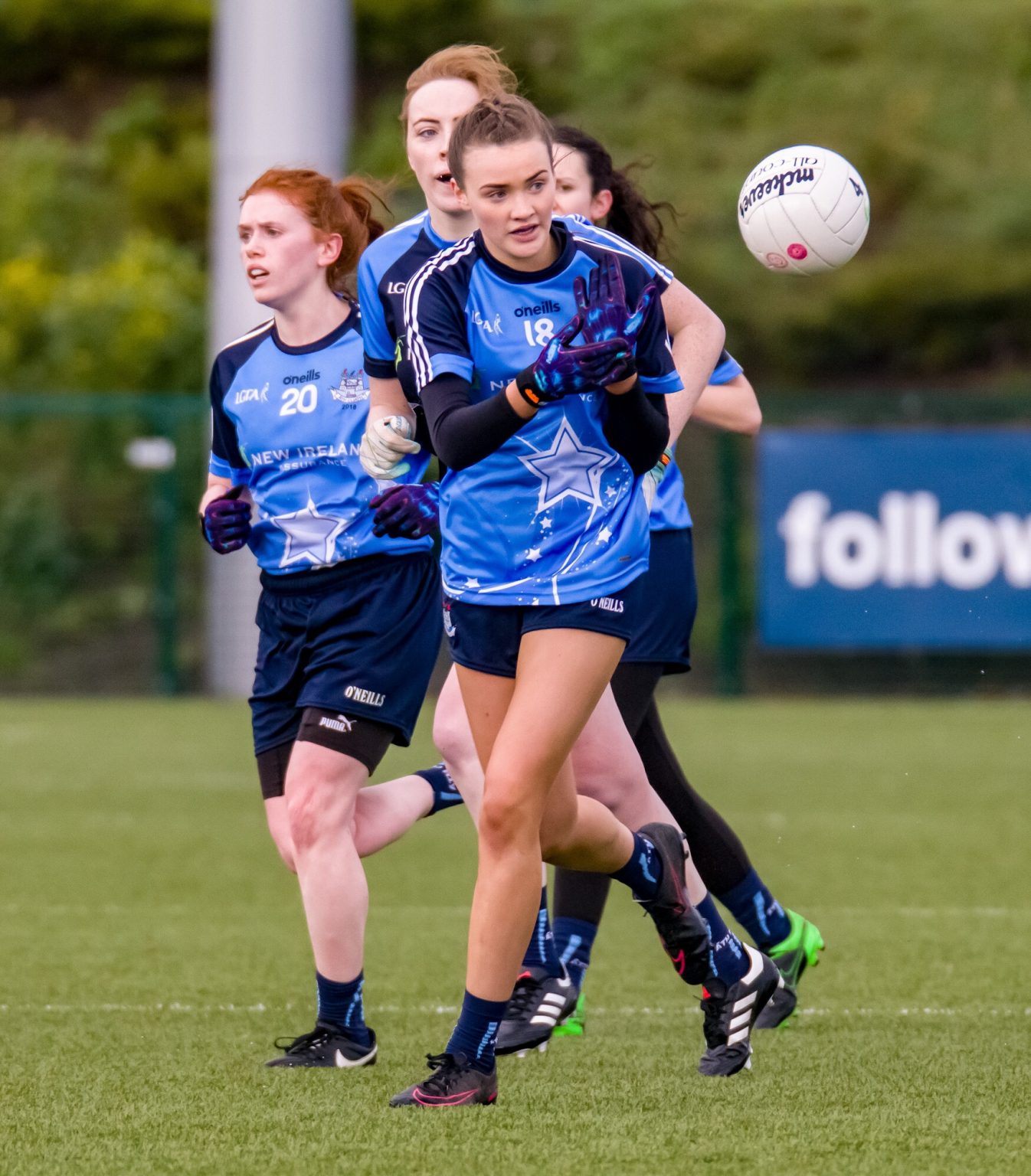 There had been little to separate the sides in a tentative opening-quarter, but as the half developed, it was the Blues who created the greater inroads in attack.

After Aisling Kerins’ long-distance free dropped short, Brock was on hand to shoot beyond the reach of the stranded Kirby.

This was the cue for both sides to make significant alterations to their starting line-up and it was the Blues who ultimately reaped the benefits.

The aforementioned Campbell pointed a 22nd-minute free and this was preceded by a stunning Brock goal five minutes earlier.

While many would be content with a hat-trick of goals, the Dalkey star continued to pose a threat on the edge of the square. Supplementing a Caroline Conway point (free), Brock rattled the back of the Navy net for her fourth goal of the half.

Campbell was more than willing to lift the scoring burden off her shoulders and she was presented with an ideal opportunity to bolster her side’s lead from the penalty spot. She was hauled down inside the square and stepped forward to confidently dispatch the resulting set-piece.

She highlighted her increased prominence with a well-worked point from open play, giving the Blues a seemingly insurmountable 5-3 to 0-2 interval cushion in the process. They maintained their stranglehold on the play when the action resumed Campbell adding a point on the turn to create additional daylight between the teams.

Templeogue Synge Street’s Ciara Bell whose club-mate, Ellen Hughes, was listed amongst the Navy squad also proved to be a livewire presence in a highly-functioning Blues attack.

Having initially matched their opponents in the early exchanges, the Navys found themselves struggling to deal with the pace and power of the Blues.

Nevertheless, they persevered with their challenge and finally enjoyed a strong purple patch in the third-quarter. When Lauryn McDonnell was picked in space close to goal, she fired to the bottom left-hand corner with a superb strike.

This added a new lease of life to the Navy challenge and their second goal of the contest soon followed on the stroke of 40 minutes. Aideen Naughton offered fresh impetus to the right-flank of their attack and her tight-angled shot floated home via a deflection.

Although they continued to find space inside the Navy ’45’, the Blues were not as clinical in the second period as they had been prior to the break. A Jodie Kearns point cut the gap to 10 points in the 48th-minute, only for Naomh Olaf’s Aoife Maher to reply immediately at the opposite end of the field. This settled the Blues back into the action and an outstanding individual single courtesy of Conway effectively eliminated any hope of a dramatic Navy comeback.

A Clara O’Sullivan point interrupted their latest scoring sequence, but Brock capitalised on a defensive error to claim her fifth goal in the closing moments.

Her opposite number – Scoil Ui Chonaill’s Sinead de Burca – was set-up by O’Sullivan for a magnificent Navy goal two minutes from time, but with Caroline Brennan and Yvonne Twomey finding the range either side of this score, it acted as scant consolation in the end. 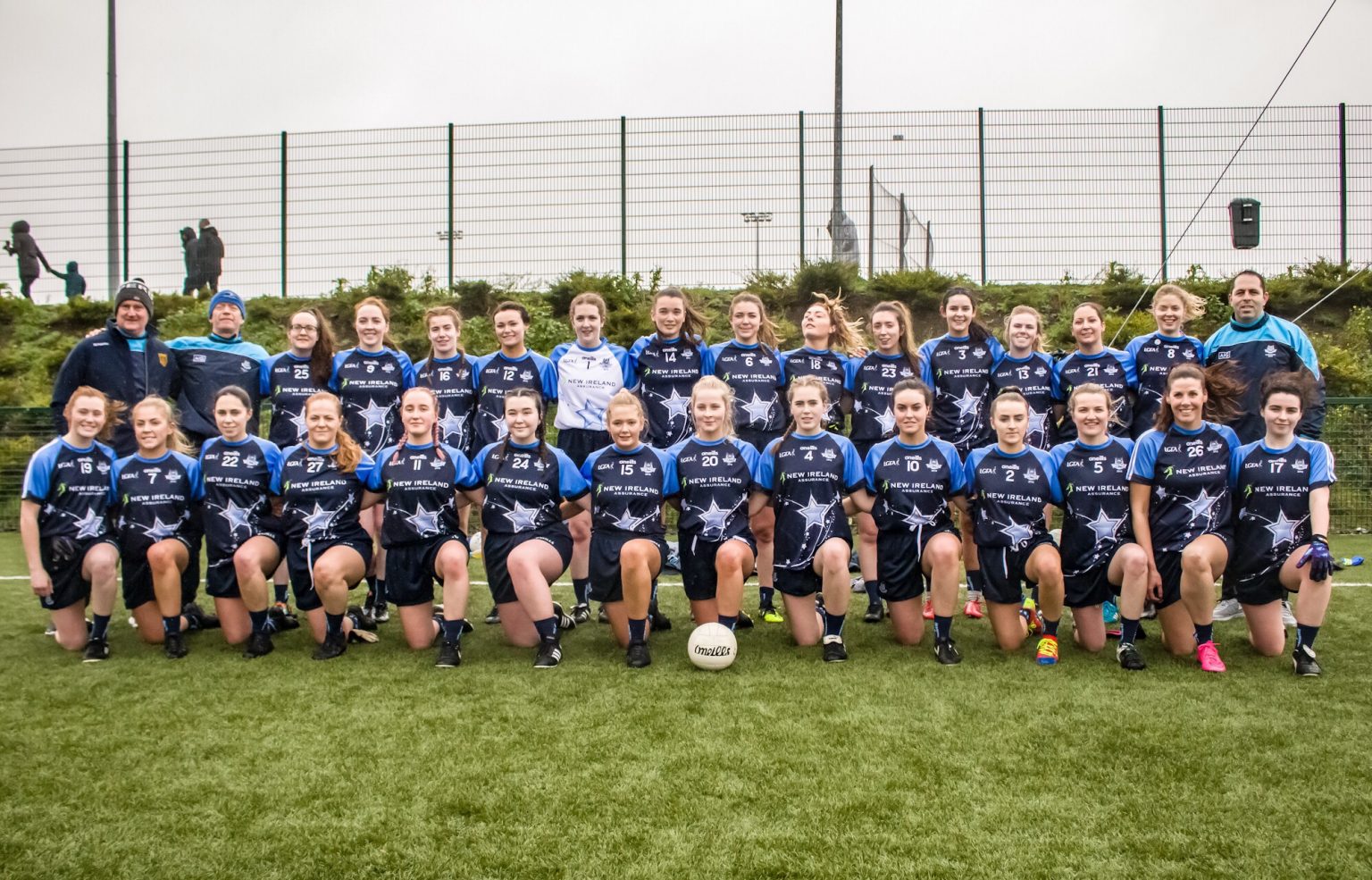