Galway’s Tracey Leonard said her side’s character shone through as her hat-trick of goals helped Galway to an impressive Lidl Ladies NFL Division 1 win over Donegal in Letterkenny.

The win sees last year’s league and TG4 championship finalists stay in touch with leaders Cork, who picked up their third win of the season against Dublin in Croke Park on Saturday evening.

With games being cancelled right around the country due to the effects of Storm Ciara, Galway recovered well to earn a 3-12 to 4-5 win over Donegal after a slow start.

“Leaking three early goals was hard to come back from but it just came down to sheer character,” said Tracey Leonard.

“We dug deep on a day that wasn’t for fancy football or anything. We had to fight for it and that’s what got us over the line.

“We have been in awkward situations before and it’s just a matter of getting back to the process and taking it from there.”

“It’s disappointing,” said Curran. “We put ourselves in a great position there at one stage. We scored some really good and well worked goals.

“We were against the breeze and maybe we felt we had the hard work done. We didn’t do the things we were doing in the second-half that had served us well in the first. People might say we were naïve and maybe a little too open at the back. But that’s the way we’re trying to play.”

For Cork it was Orla Finn who did most of the damage once again, and her five points meant Carla Rowe’s second-half penalty was not enough to rescue Mick Bohan’s TG4 All-Ireland champions.

A third straight win has the Munster side three points clear of Galway in the standings and their manager Fitzgerald was delighted.

“I think we played some fabulous football,” said Fitzgerald. The first 40 minutes we were well on top. What brought them back into it was the penalty. They got a lift from that obviously.

“I thought if we got one more score it would have settled us, but I was absolutely thrilled with the attitude of the girls and the commitment.”

Dublin manager Mick Bohan was left to ponder what might have been as his side lost for the first time this season.

“It’s probably not the result that’s frustrating for us, rather the number of opportunities they had that they just squandered. Very disappointing, really poor execution and an awful lot of the basics of the game just not executed. That becomes a huge source of frustration.”

Meanwhile, in Division 2 of the Lidl NFL Tyrone defeated Clare in the Saturday night fixture, where Gerry Moane’s side claimed a 3-7 to 1-7 victory, while Bridgetta Lynch’s goal early in the second half secured a 1-13 to 0-9 win for Meath against Monaghan.

In the same competition Kerry maintained the only 100 per cent record in the division as they held on to claim a 2-12 to 2-10 win against Armagh after the Kingdom had led by seven points at the interval.

Aoife McCoy and Blaithin Mackin goaled late on for the Ulster side but the Munster side had just enough in reserve to claim their third win and sole leadership at the top of the standings.

All four games in Division 3 fell foul to the weather, but in Division 4 there were wins for Louth, Offaly and Leitrim.

The Connacht outfit were the most comprehensive winners with Muireann Devanney’s late strike putting the seal on a big 7-10 to 0-2 victory in Ballinamore.

Offaly did the damage in their first half against Derry at Owenbeg. The visitors were 2-4 to 0-5 ahead at the break before they cruised to a 3-8 to 0-8 success.

The other game was much more competitive with Louth coming out on the right side of a 2-10 to 1-9 scoreline in Cooley. 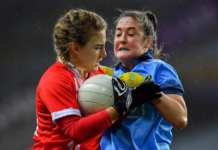