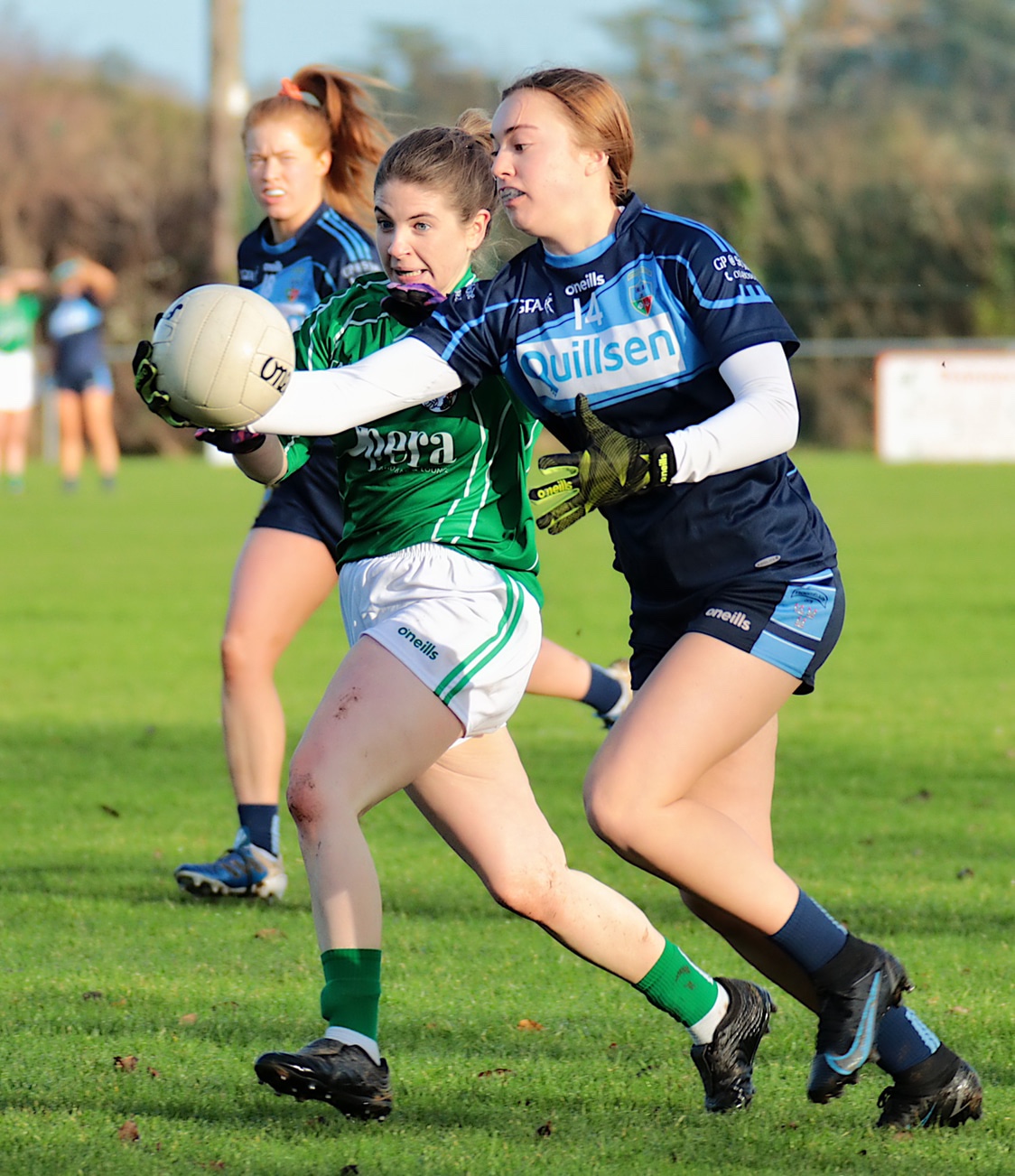 St Judes booked their place in the Junior All Ireland club championship semi finals with a comprehensive forty point win over Tír na nÓg this afternoon.

Judes raised nine green flags during the game with seven of those goals coming in the second half. Laura Martina, Cliodhna Nicoletti and Aoife Keyes with two apiece and Ellie Young, Lisa Morris and Caoimhe O’Brien with one each.

Tír na nÓg the Bristish representatives from Newcastle battled hard in the first half, but the effort they had to exert to keep somewhat within touching distance of St Judes at half time caught up with them after the break.

The hard running, movement and interplay between Hannah Hegarty, Cliodhna Nicoletti, Leah Butler, Niamh Kerr, Lisa Morris and Aisling Gannon proved to hot to handle for the side from Newcastle and the finishing scoreline was a little cruel for all their efforts.

Tír na nÓg opened brightly and grabbed the opening score of the game in the second minute with a pointed free from Niamh Barrett.

The sides were level two minutes later thanks to a fine point from the impressive Lisa Morris. Judes were motoring at this stage and Tír na nÓg goalkeeper Aoife Reilly had to make a sharp save to deny Cliodhna Nicoletti scoring the opening goal of the game in the seventh minute.

Tír na nÓg were struggling to get the ball out of their own half and Judes took full advantage, Aisling Gannon and Ellie Young popped over a point apiece and then in the eleventh minute captain Aoife Keyes struck the ball to the net for the games opening goal.

A minute later Lisa Morris grabbed her second point of the game as Judes threatened to steamroll their opponents.

But Tír na nÓg stemmed the one way flow with a fine point from play from Eimear Connell. Leah Butler who was involved in the build up to all of Judes scores got in on the act herself with a nice point.

The visitors from Newcastle drove back down the field and Dearbhaile McNeill finished off the move with a fine point.

Judes though were opening up the visitors defence with some intricate quick passing and Tír na nÓg goalkeeper Aoife Reilly had to be sharp to deny Lisa Morris a goal in the 17th minute.

But two minutes later and Judes registered their second goal of the game when Cliodhna Nicoletti smashed the ball to the net after some excellent build up play.

Nine minutes from the break Tír na nÓg pulled a point back thanks to a converted Niamh Barrett free. But seconds later they suffered a setback when Dearbhaile McNeill was shown a yellow card and a ten minute spell in the sin-bin.

Ellie Young and Lisa Morris extended Judes lead before the break and at half time Tír na nÓg had a mountain to climb with St Judes leading by nine with the score 2-07 to 0-04.

After the break it was just one way traffic towards the Tír na nÓg goal. Judes won the throw-in and the ball was quickly worked into Aoife Keyes in on goal and the centre forward made no mistake and slotted the ball to the net.

Judes tagged on six more points to extend their lead further, two from Niamh Kerr, two converted frees from Ellie Young and a point each from Leah Butler and Aisling Gannon.

With the result of the game now a forgone conclusion Judes made sure the game was well beyond their opponents with a two goal blitz in the space of sixty seconds, the first a fine finish from Ellie Young and the second from Lisa Morris who was found in space in front of goal and gave the keeper no chance with a rocket of shot which was just reward for her excellent performance throughout the game.

In the sixteenth minute Tír na nÓg won the ball back in the middle of the field and the ball was played into Eimear Connell in front of the Judes goal, but goalkeeper Aoife McAuliffe came out smartly off her line to block Connell’s goal attempt and Judes cleared their lines.

St Judes with such a significant lead could have been forgiven for taking their foot off the pedal in the final quarter but that wasn’t the case and they drove hungrily forward for more scores.

With places up for grabs for the semi final the Judes second half substitutes Laura Martina, Lauren Kearney and Caoimhe O’Brien came to the fore to give the management plenty to think about when they sit down to pick the team in two weeks.

With twelve minutes left on the clock and seconds on the pitch Laura Martina split the posts for a fine point. Ellie Young then added her fifth point of the game with a well struck effort.

Laura Martina then scored 2-01 in a blistering five minute spell which was ended with Young’s sixth point of the contest.

Tír na nÓg out on their feet at this stage kept plugging away and were awarded a free in the final minute of normal time which was converted by Niamh Barrett.

As the game headed into injury the other two second half substitutes got in on the scoring act, Lauren Kearney swung over a nice point, Judes won the kick-out, Hannah Hegarty fisted the ball into Caoimhe O’Brien who rounded the keeper to slot the ball into the net.

Cliodhna Nicoletti then collected the resultant kick-out took off down the right hand side and hit a looping shot which dipped over the keeper into the top left corner of the net for Judes ninth goal.

And that was that for the Dublin and Leinster champions St Judes and they will now look forward to an All Ireland Junior club championship semi final against Carrickmacross of Monaghan in two weeks time. 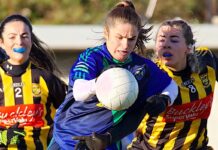