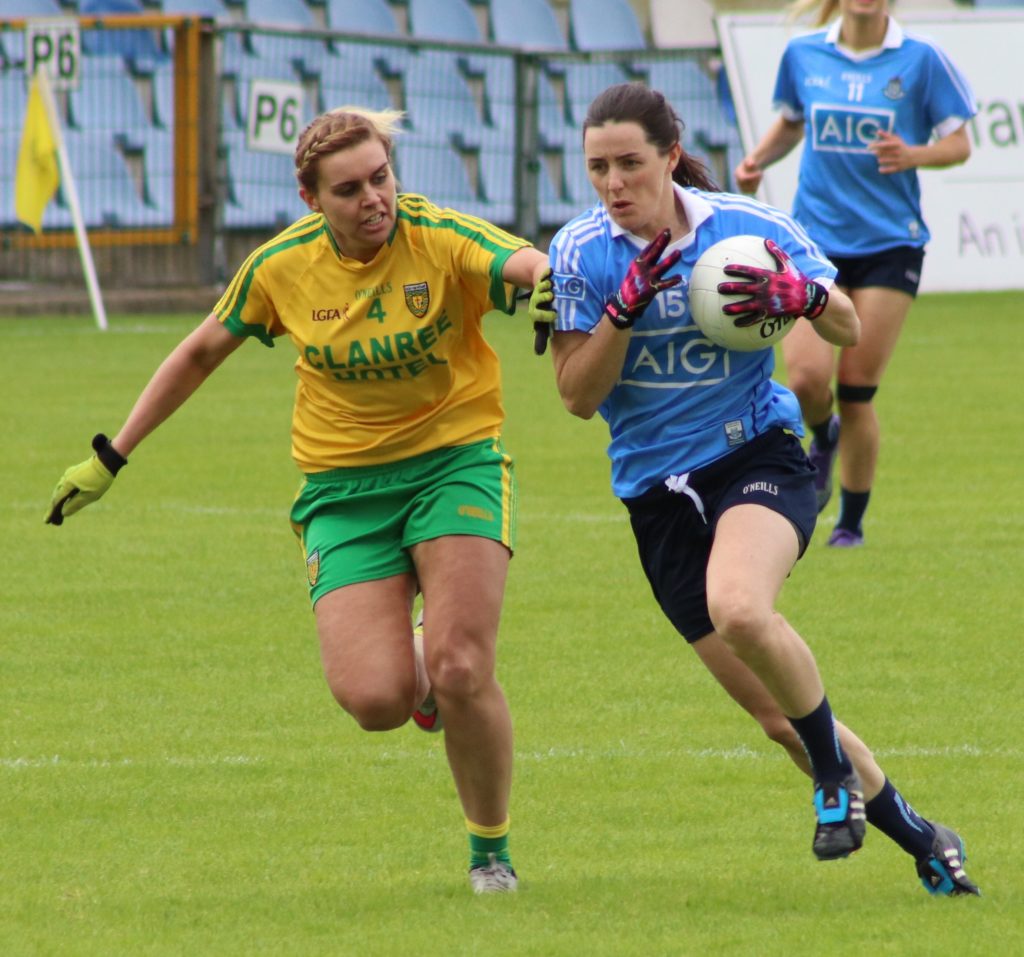 The first match of the weekend is the first competitive meeting of Cork and Mayo since they contested the Division 1 Final last May.

Mayo had a rocky start to their 2017 campaign as they began with 2 losses in a row but they put an end to that poor run with victory over Armagh in the last round.

One of the most significant features of that Armagh win was the contribution of Sara Rowe who eased the scoring burden on Cora Staunton with 2-05 of her own.

Cork enjoyed a good win over Dublin last weekend to return to the position that they are most used to at the summit of the table. There is a lot at stake in this match with Mayo perhaps having the greater need for the win.

The hosts will be aware that another loss could put an end to their Top 4 hopes and would leave them cut adrift at the bottom of the table.

For Cork a win will all but guarantee a return to the knock out stages of the league. Doireann O’Sullivan and Grace Kearney both made welcome returns to the Cork side last weekend in a further boost to their chances of success.

Cora Staunton will breathe a sigh of relief when she looks at the opposition selection and sees that her great nemesis, Bríd Stack, is not amongst their number. If Staunton can have a bigger impact on this match then Mayo will have a great chance of handing the Rebellettes their second defeat of the campaign.

Dublin will be hurting after another defeat at the hands of Cork and Donegal could feel the brunt of that hurt in Parnell Park.

The defeat will have unearthed some issues for Mick Bohan and his management team which he will be seeking to rectify starting this weekend. Donegal looked like they were going to maintain their 100% record only to be caught late on against Kerry last weekend; however, they will be pleased with their performance in a very difficult away fixture.

If Donegal want to compete at the elite level of the sport they will need to put in a big performance against a good Dublin team. Dublin will be expected to play a very strong team this weekend to send them into the break on a high, Donegal will make life very hard for their hosts but Dublin are a very tough nut to crack in Parnell Park.

Kerry had been struggling in the Top Division until they recorded a dramatic victory over the table toppers, Donegal, last weekend.

Laura Rogers was to prove to be their hero as her goal secured victory for the Kingdom and there are signs that she is ready to deliver on the rich potential that she showed as an underage player.

Monaghan had a setback last weekend as they were beaten by Galway at home and Paula Cunningham will be particularly disappointed with the manner of that defeat.

This is a vital match for both counties who are level on points in the group of 4 teams at the bottom of the table. A win for either county will push them into the promotion picture whereas defeat will mean that avoiding relegation becomes their priority. Kerry are always strong at home and with Monaghan showing some frailty of late if could give Kerry the edge that they need.

Galway have been inconsistent throughout this campaign as they followed up a good win over Mayo with a poor display in defeat to Donegal.

A win over Monaghan last weekend has pushed Galway into the top 4 and they will be determined to follow that win with another to ignite their campaign.

Armagh will be very disappointed that they were so well beaten by Mayo despite scoring a healthy 18 points themselves. Their habit of conceding goals has hurt them recently and considering that Galway have scored 6 goals in 3 matches Armagh must improve their defensive showing this weekend.

Galway will fancy their chances of recording a home win in Tuam whereas Armagh will be desperate for the points to avoid a relegation battle that is inching closer.

Westmeath were somewhat surprisingly beaten earlier in the competition by Sligo but they have bounced back with a win over Tyrone last week to send them back into the play off positions.

For Clare it has been a difficult season to date as they have failed to scale the heights of 2016 and find themselves sitting at the bottom of the table.

Clare need a win to salvage any promotion hopes but they will face an uphill battle against a Westmeath side that are starting to find their rhythm.

Waterford have done quite well since their promotion to the second division but they will need a win if they hope to stay in touch with the promotion places.

Kildare have been hugely unlucky this season, in all 3 of their matches to date they have put themselves in a position to win the fixture but they have yet to clinch a victory.

They now sit at the bottom of the table and are uncomfortably close to relegation, those fears would be allayed with a win away to Waterford but it is a big ask for a group that are low on confidence.

Limerick achieved promotion from the bottom Division last Summer but they have found the going tough in Division 3 as they are yet to claim a point.

The fixture list has not been kind to Limerick as they have faced many of the promotion chasers but they will have targeted this match as a key fixture in their quest to retain their Division 3 status.

Offaly pulled off something of a shock last weekend as they handed Leitrim their first defeat of the season. A win for the Faithful County over Limerick will all but guarantee their safety and they can begin looking up the table rather than down.

Roscommon will be happy with their last result as they left Meath with a share of the points and they will fancy their chances of going into the mid season break with an extra three points as they host Down.

Down are bottom of the table as they are yet to earn a point. Another loss this weekend would be a hammer blow to their confidence going into their make or break fixture versus Limerick when the League returns on March 18th.

This is a meeting of the top 2 in the Division as Tipperary look to guarantee their semi final place. Meath have performed well to date as they have avoided defeat and claimed 7 points from a possible 9.

Tipperary will be favourites to claim the victory, especially after dismantling Down last weekend, but they will be wary of a Meath team that are likely to be amongst their possible semi final opponents.

Laois have been improving steadily in 2017 and they finally got the reward that their efforts merited as they defeated a strong Clare team last weekend earning their second win that sees them sitting at the top of the table on score difference.

This weekend they welcome their promotion rivals, Sligo, to Annanough in a vital clash. Sligo also had a good win last weekend when they defeated Waterford and will hope to build on that performance. There is little to choose between these sides who should produce a very good game of football.

This all Ulster clash has the potential to be the best of the weekend. Cavan are coming off a victory whereas Tyrone suffered a defeat at home to Westmeath.

These two teams will expect to take their place in the semi finals but a defeat for either this weekend would be a huge blow to their promotion chances. Cavan have home advantage and will be determined to make that count in their favour.

This is the biggest match this weekend in Division 3. There will be a much clearer picture in Division 3 by the time Sunday comes around as all 6 of the other teams will have played.

A loss could end the promotion hopes of either county so a win is vital for both counties. Leitrim will want to make amends for their defeat to Offaly so they will be on high alert for the visit of Wexford as they look to avoid any further surprises.

Longford’s campaign has followed expected lines as they have defeated all comers to sit at the top of the table.

Although it is something of a surprise to see Carlow in the top 4 after 2 wins from their first 3 matches this will be a much bigger test than they have faced to date as they travel to the home of the Junior All Ireland Champions.

Derry suffered a heavy defeat last weekend away to Longford and although they are home this weekend they will be lucky to avoid a similar fate as Wicklow are their visitors. Anything but a Wicklow victory would be a big surprise in this encounter.

Antrim will be disappointed to have lost again last weekend and especially to their rivals, Louth. This weekend it is Ulster opposition as Fermanagh, who also suffered a heavy defeat to Wicklow, are the visitors. This is an important match for both teams as a loss will knock either county out of the promotion race.

Louth had stuttered in their campaign to date but a morale boosting win over Antrim last weekend will be a huge help. Kilkenny stay bottom of the table as they continue to develop this young group of players. It will be another tough match for the Cats but they will hope to continue their improvement.