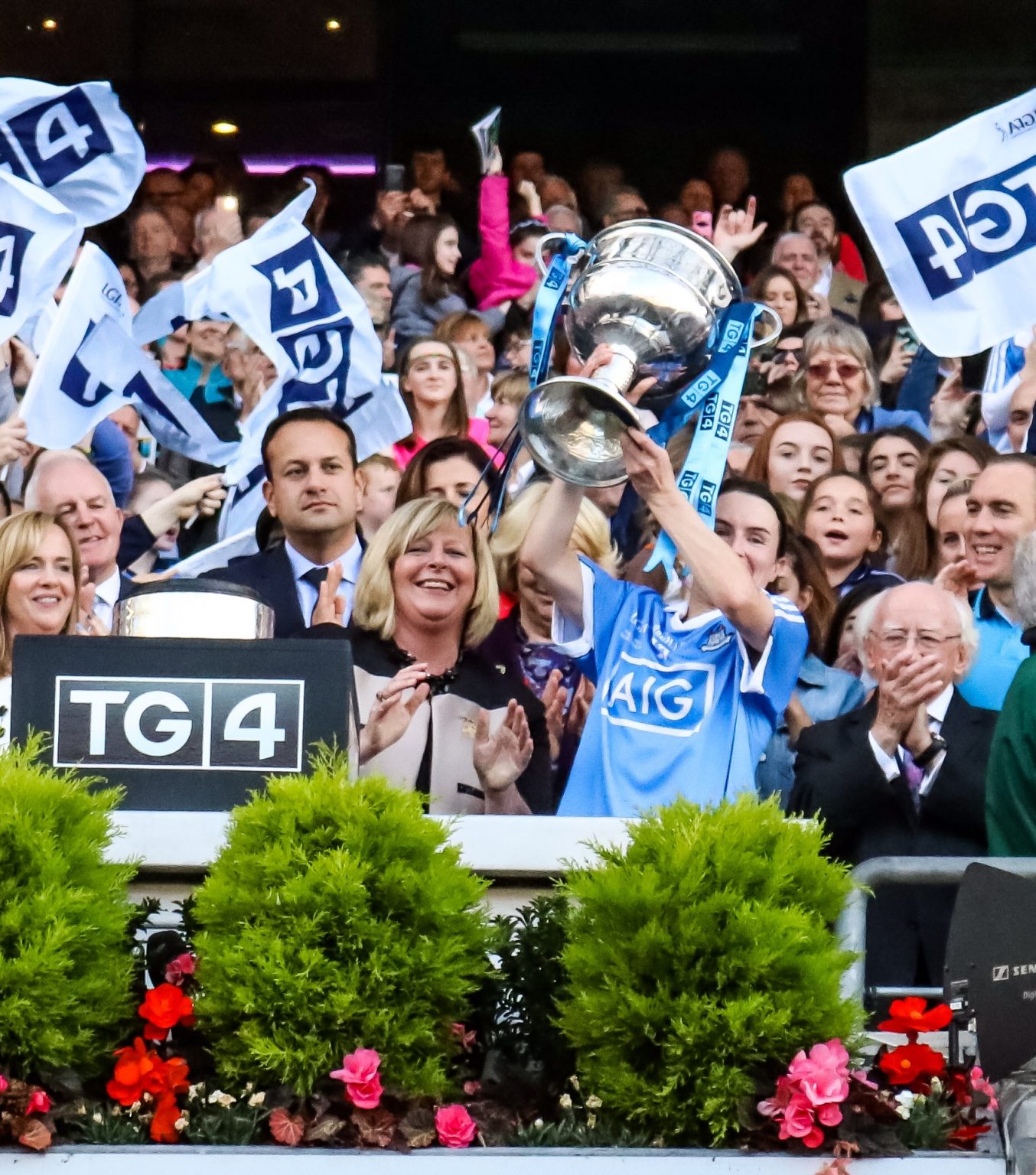 The Dublin Senior Ladies Footballers finished off a brilliant season for GAA in the Capital by winning the Brendan Martin Cup with an emphatic victory over Mayo on Sunday afternoon in TG4 Senior All Ireland Final which took place in Croke Park.

It completed a special double as it’s the first time both the Dublin Senior Ladies and Men’s footballers have won their respective All Ireland titles in the same year.

The record crowd of 46,286 were treated to a thrilling, intense and full blooded final that had everything from sin bins, a saved penalty and four sumptuous goals. 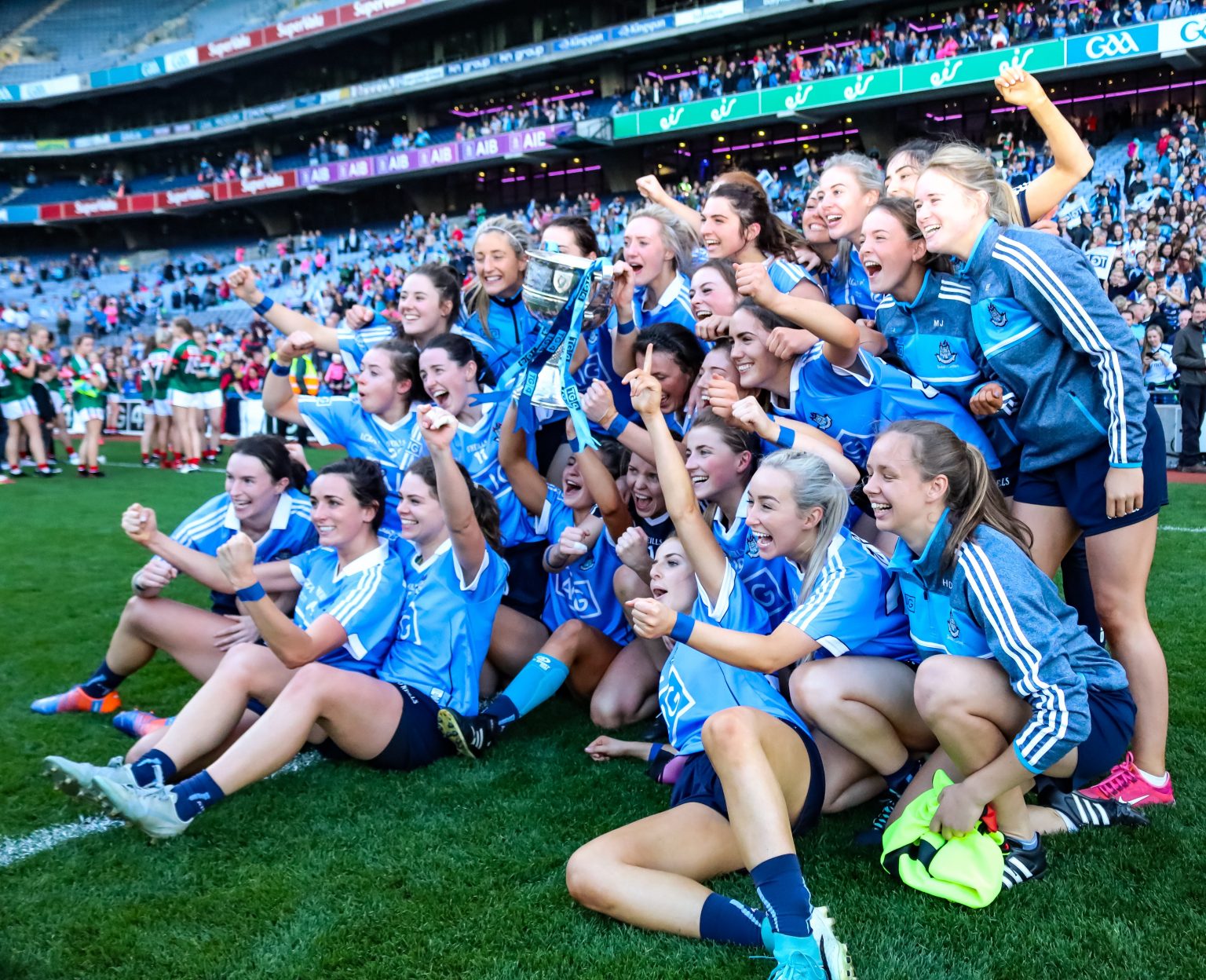 The game was played at a frantic pace throughout and it was Dublin who registered the first score of the final with a Sinead Aherne free.

The sides were level by the fourth minute via a fisted effort from Mayo’s Cora Staunton who had a very mixed day in front of the posts hitting 9 wides in the game with 7 of them coming in the first half.

The Carnacon club player though put Mayo in front in the 8th minute with an excellent free from the hands about 45m out. 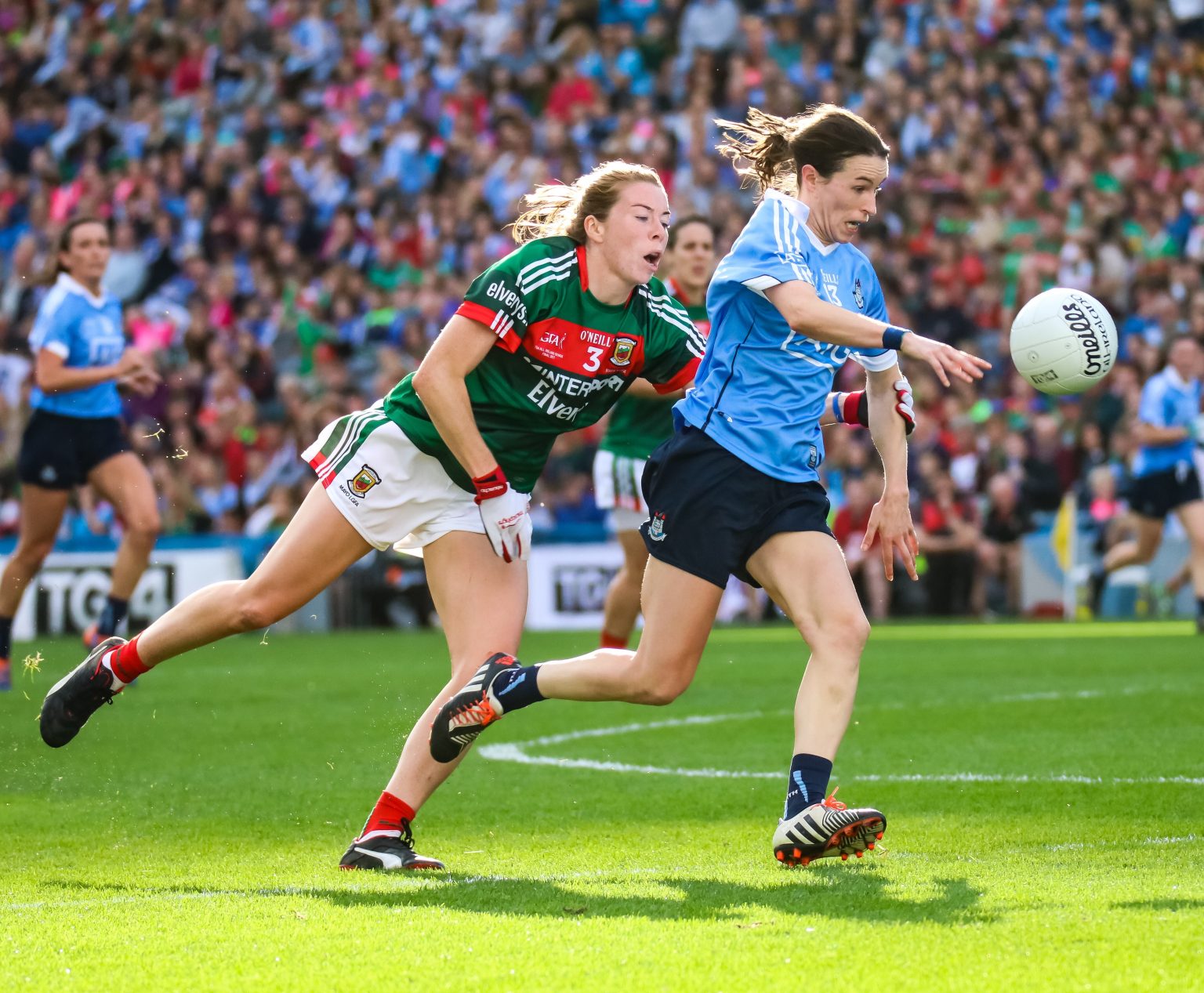 The game flowed from one end of the pitch to the other as the teams swapped point for point, Staunton, Niamh and Grace Kelly on target for Mayo and Sinead Aherne with four points in reply and by the 19th minute there was nothing separating the sides with the game tied at 0-05 apiece.

Dublin’s attack had at this stage really caught fire and the girls in blue took their first strides towards the title in the 21st minute. A driving run from player of the match Noelle Healy opened up the Mayo defence and as she approached the sticks she popped the ball inside to Niamh McEvoy and the St Sylvester’s star slotted the ball home for the games opening goal.

Cora Staunton reduced the deficit to two with a pointed effort from a free. But Dublin went straight back down the other end and McEvoy added a fine point to once again put a goal between the teams. 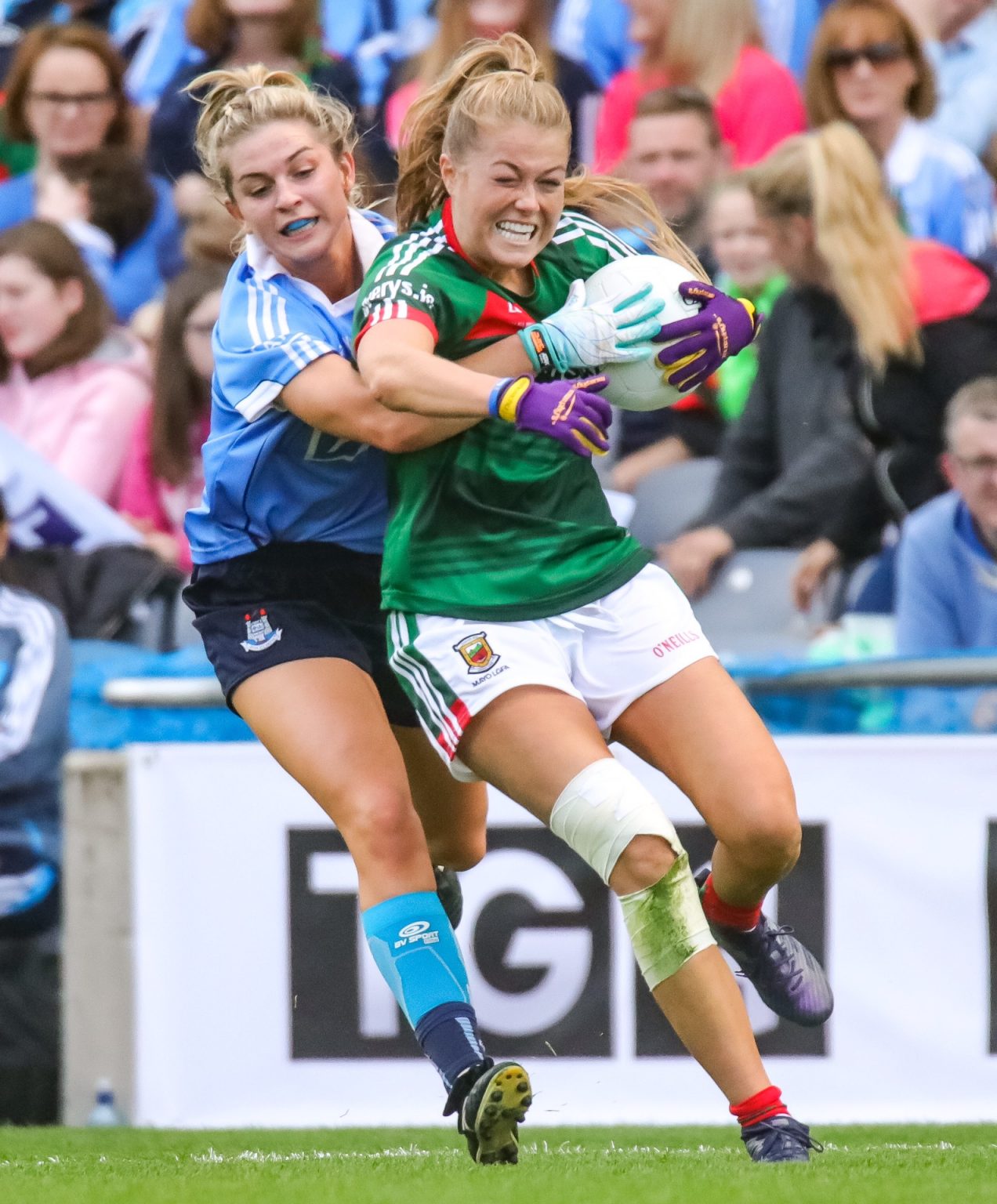 Although that was to be the last score of the half, there was plenty of drama in the final five minutes before the break. Dublin were awarded a penalty after Sinead Aherne was upended by Mayo goalkeeper Yvonne Byrne who was shown a yellow card and was sin binned.

That forced Frank Browne into making his first substitution of the game and bring in Aisling Tarpey. It was a good call as the 22 year old keeper dived to her left to save Aherne’s penalty.

Mayo were reduced to 13 players two minutes later as defender Rachel Kearns was sin binned for an off the ball incident with Noelle Healy. That indiscipline almost cost them dearly as another powerful run from Healy almost yielded a second goal for Mick Bohan’s side, but the effort from the St Brigid’s club player came back off the butt of the post and away to safety to the relief of the girls in red and green. 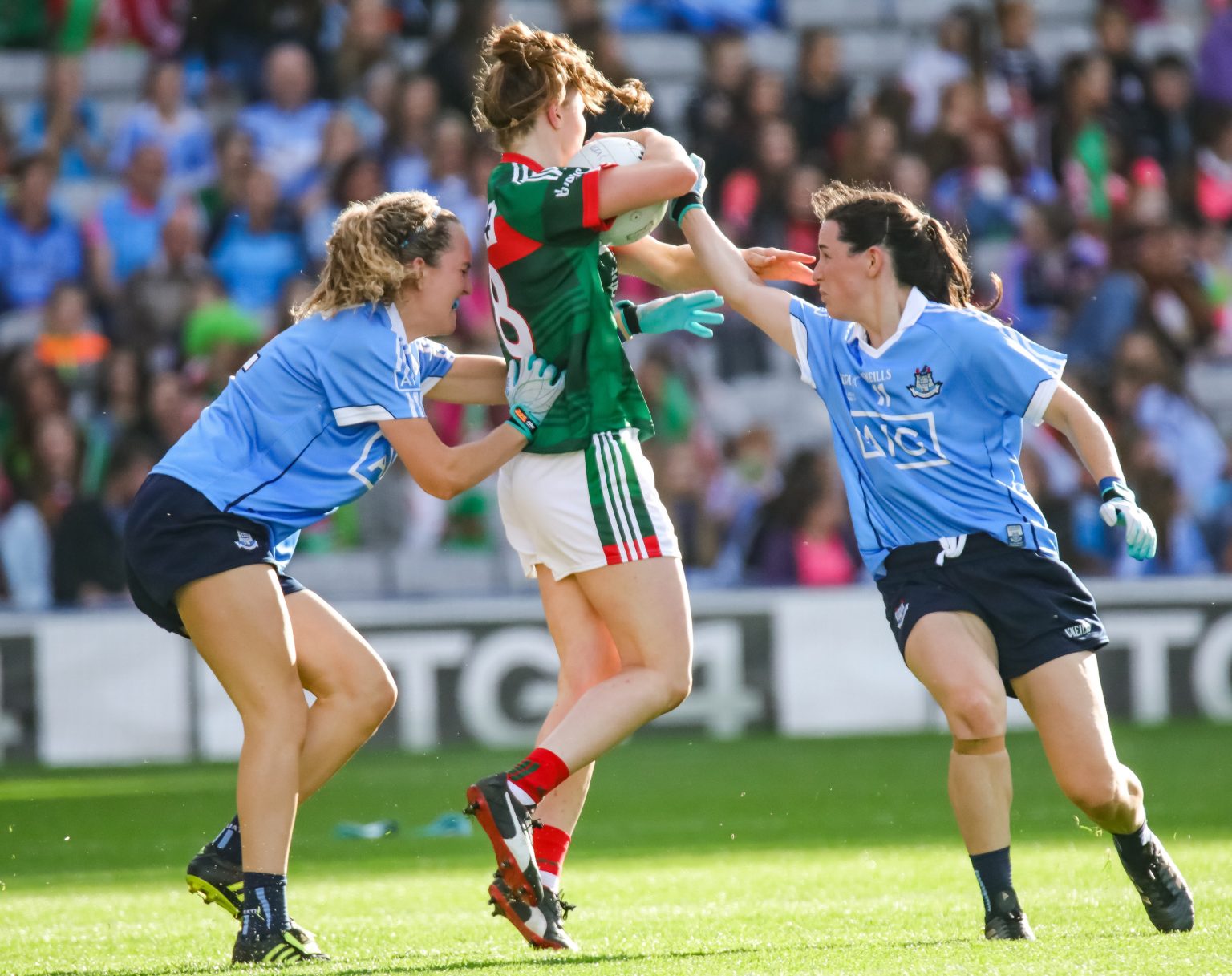 Dublin crates a couple of other chances before the short whistle that they failed to take and those missed opportunities kept Mayo in the game, as the teams headed to the dressing rooms there was only three points separating them with the score 1-06 to 0-06.

Dublin continued to create goal opportunities in the early part of the second half. From the throw-in Lauren Magee powered through the Mayo back line, her effort at goal just shaved the outside of the post, but referee Seamus Mulvhill who officiated the game well throughout, awarded Dublin a free for a foul on Magee and Sinead Aherne slotted it over to give the girls in blue a four point lead.

Staunton brought it back to a single score game again with a pointed free in the 37th minute. A minute later Noelle Healy narrowly missed a glorious goal chance after a well worked Dublin move. The girls in blue were enjoying the bulk of the possession, but couldn’t shake off a dogged Mayo team. 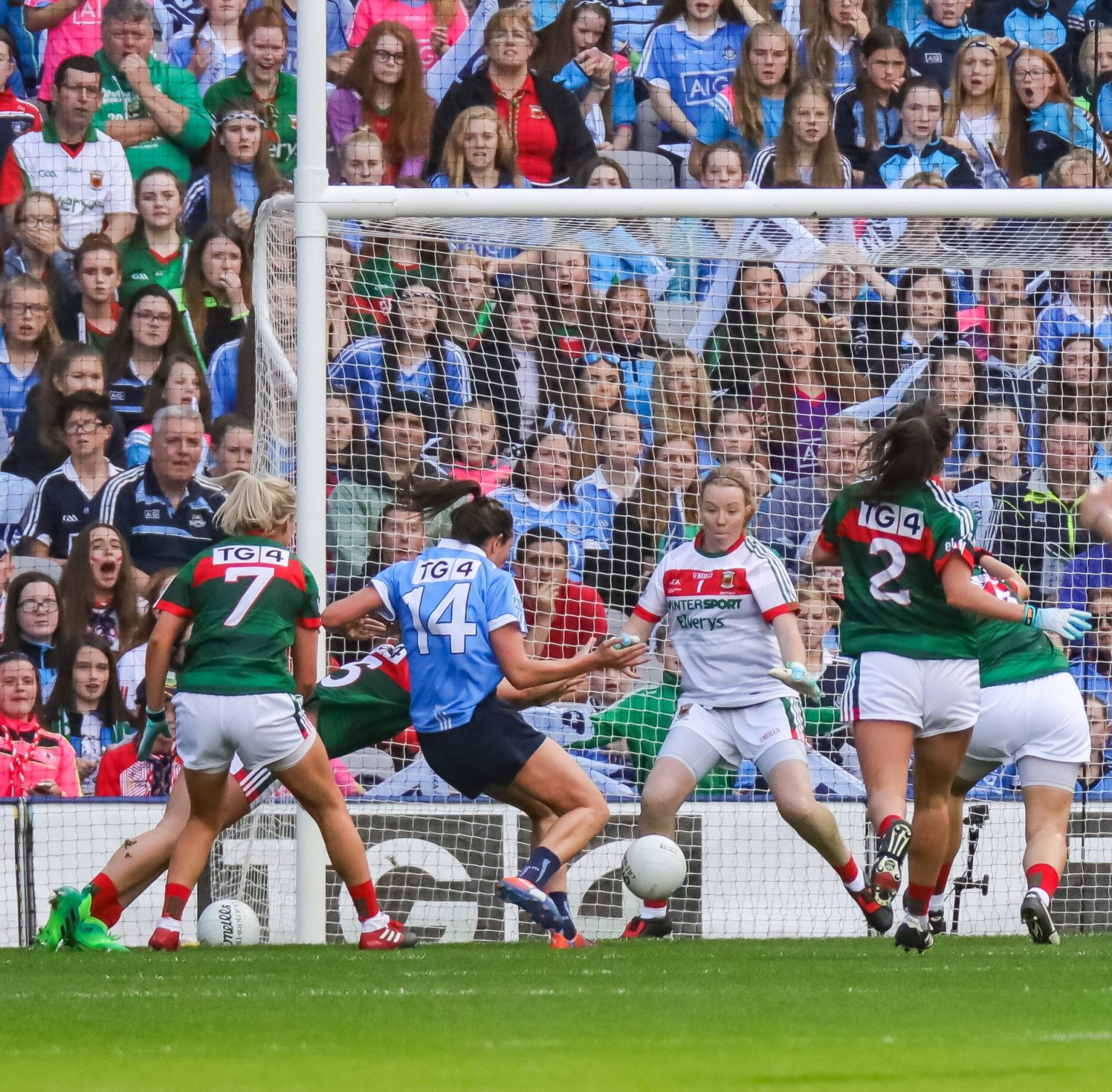 Two points from Sinead Aherne were cancelled out with one apiece from Aileen Gilroy and Cora Staunton and then Carla Rowe and Grace Kelly swapped points to leave just a goal between the teams with ten minutes left in the final.

Nicole Owens finished off a brilliant and incisive run by picking out substitute Sarah McCaffrey who made no mistake and buried the ball to the back of the net and Dublin led by six.

Thee minutes later and Mayo received their third sin binning of the game with defender Orla Conlon sent to the line. With the girls in green and red visibly tiring it was a decisive blow as Mick Bohan’s side cut loose. Another Sinead Aherne converted free put Dublin seven ahead and they put the game to bed in a blistering two minute spell. 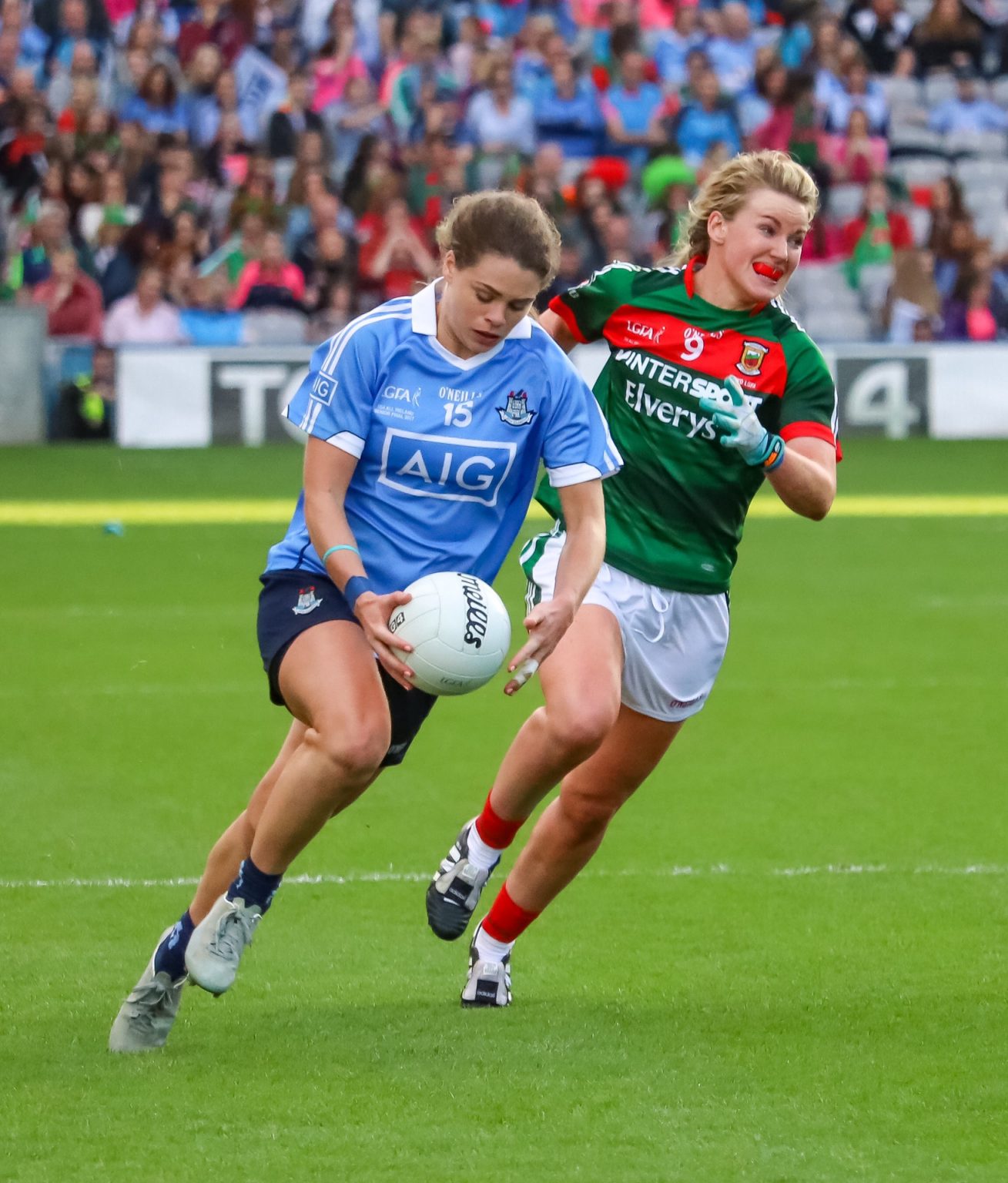 Substitute Hannah O’Neill collected the ball on the right wing, took two steps with the ball looked up and hit a stunning cross field to an unmarked Carla Rowe in front of the sticks and the Clann Mhuire star netted for the Dubs third goal.

Moments later and Dublin poked more misery on the girls from the West, Noelle Healy went on a rampaging run through the heart of the Mayo defence and set up Sarah McCaffrey for her second goal and Dublin’s fourth of the final.

Cora Staunton grabbed a consultation point right at the death, but the hooter sounded seconds later and it was party time for Dublin who could now after three narrow misses, celebrate winning an All Ireland title. 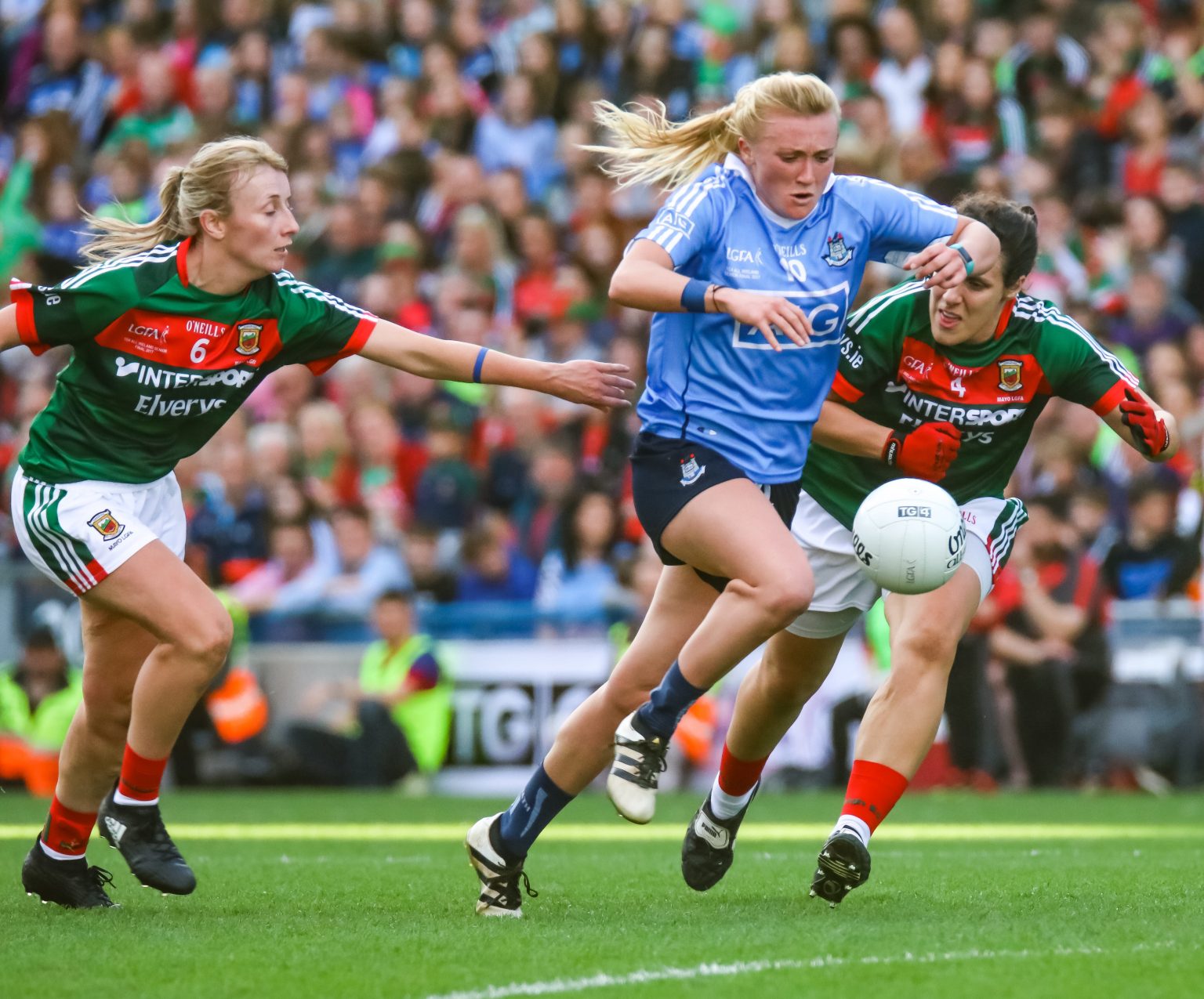 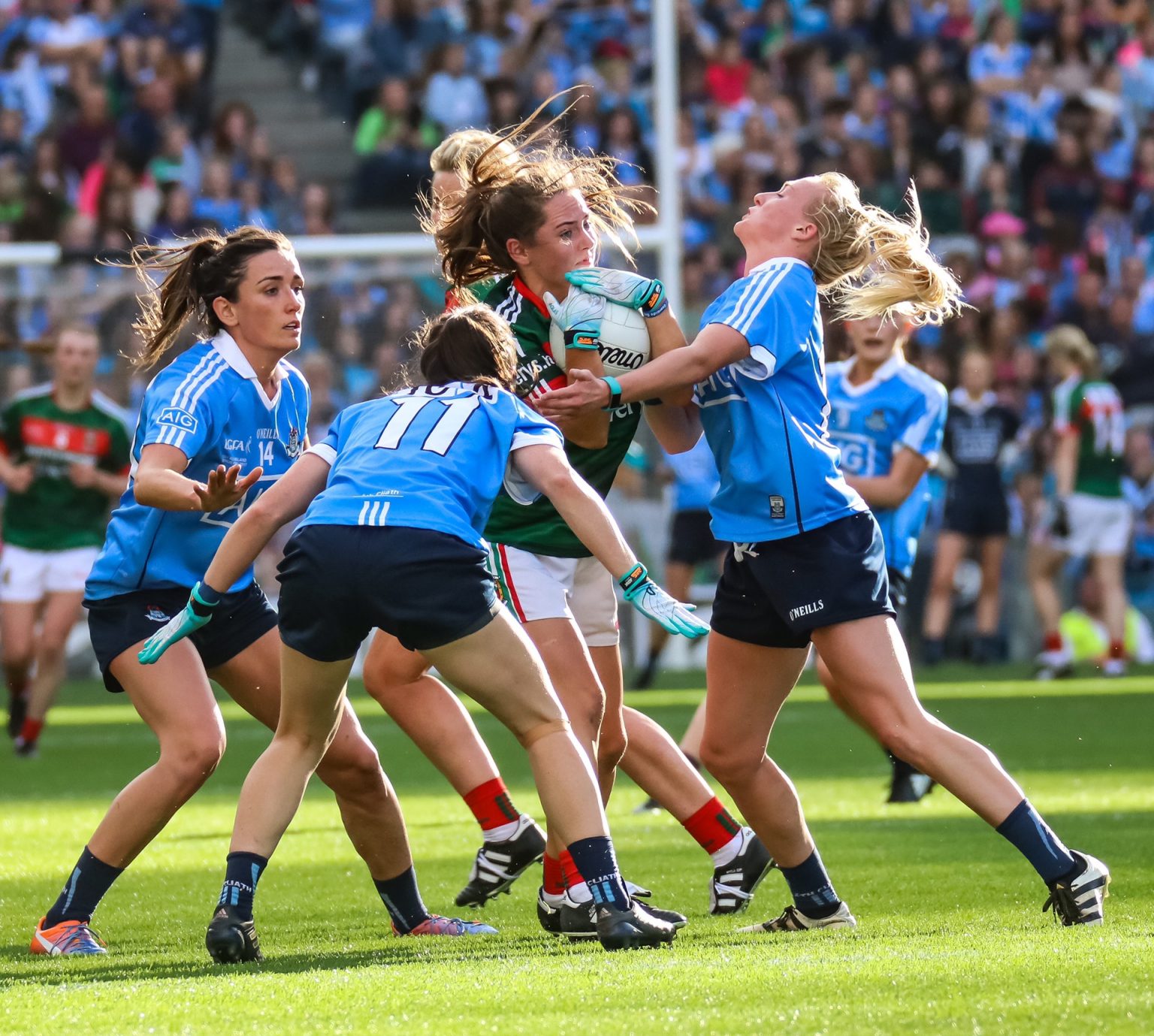 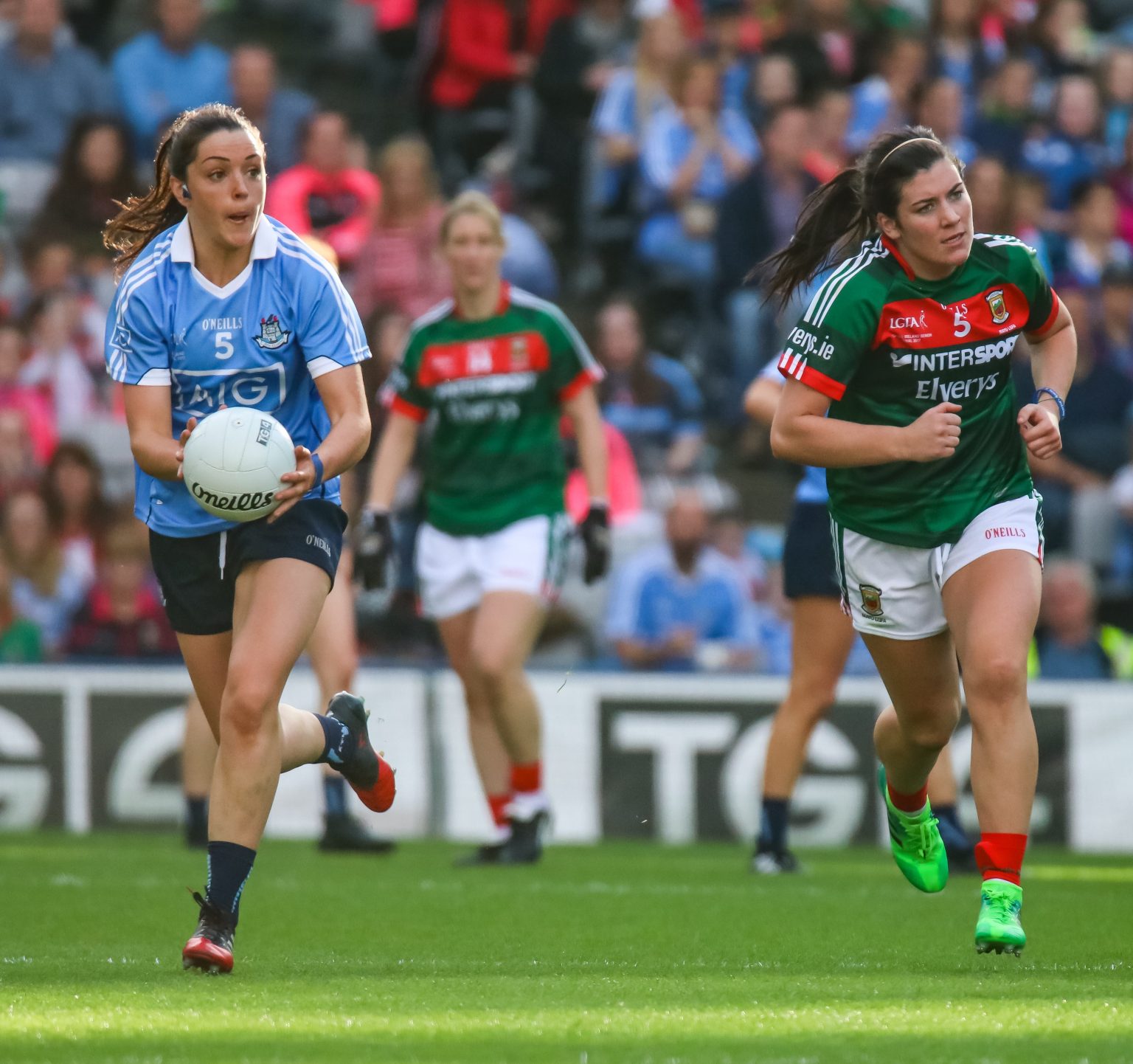 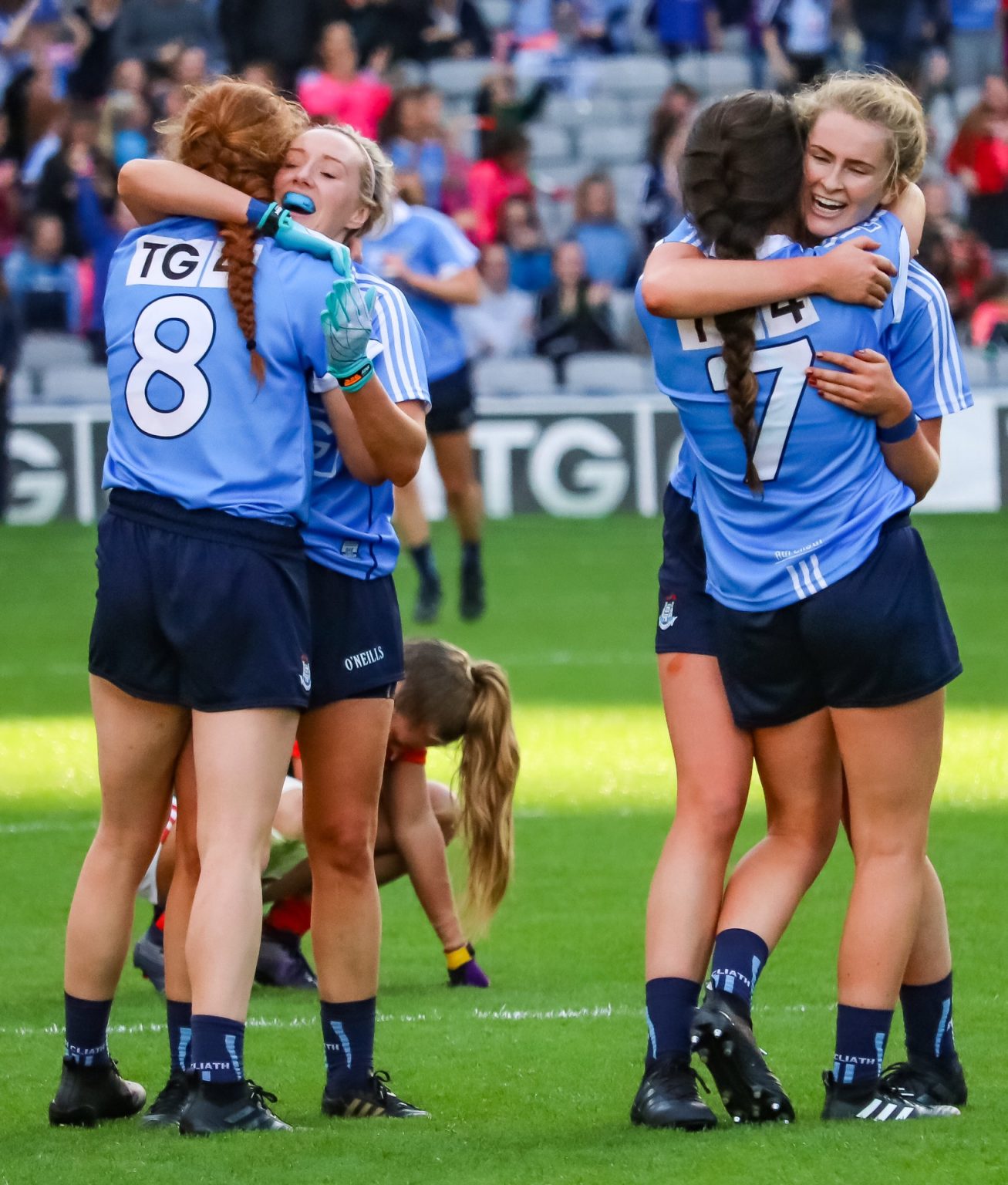