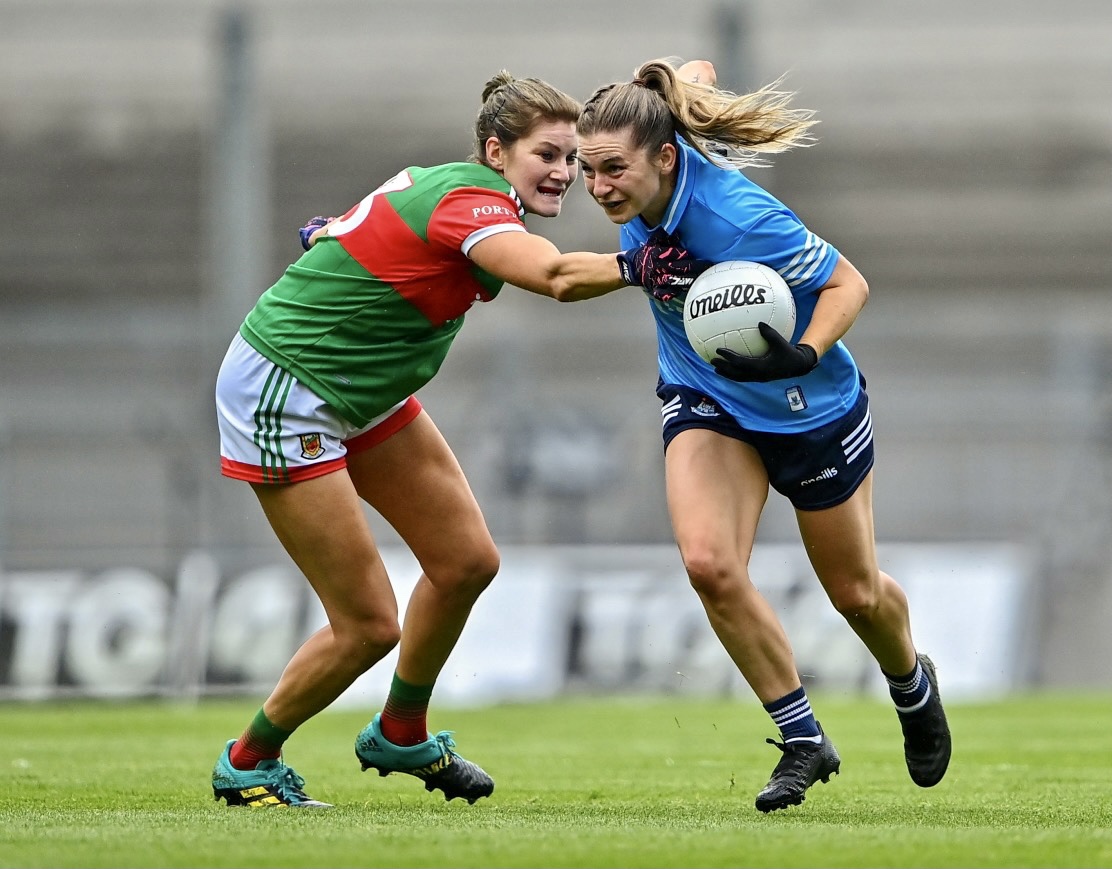 Dublin’s All-Star defender Martha Byrne has been an ever member of the the sky blues defence in the teams successful acquisition of four All Ireland titles in a row.

Tomorrow Byrne will once again form part of the last line of defence for Mick Bohan’s side as they seek to claim a fifth Senior All Ireland title on the bounce.

If anyone had told Martha Byrne back in 2017 after Dublin won the first of their four All Ireland titles that they would go be going for a fifth in a row the Cuala player would have been shocked.

“Definitely not, I sensed that the tide was changing a little bit and our team was improving, but I think if you said four years ago that we would be going for five in a row, I’d have been delighted, but fairly shocked, so it’s fantastic.”

Long title winning runs don’t happen by chance, so what exactly has been the key to Dublin’s four year championship reign that now stretches to 25 games unbeaten.

“There is a phrase that’s used here ‘Tension in the Tank’ and I think there is constantly tension in the tank within our squad and that is probably why we have been so successful.”

The phrase ‘tension in the tank’ is not a term that is maybe heard too regularly in GAA circles so what exactly does the phrase mean?

“It means no one is comfortable in their position explained Martha, it’s such a competitive environment that your constantly pushing each other in a good healthy way so there is constantly tension in our tank.”

Although everyone involved in the Dublin set-up is ultra competitive and wants to win titles, Martha explained what’s equally important to the players and management is the manner in which those titles are won in terms of the team performance.

“Yes that was probably something in the 2019 All Ireland Final that we were really disappointed with, obviously we won the All Ireland which is fantastic, but our performance wasn’t very good and I think winning is one thing, but we are really going after performing well, particularly when we know what we can achieve as a team.

But does that constant striving for the ultimate performance bring with it even more pressure, not so according to Martha.

“No it doesn’t bring pressure, it’s more in terms of when the team performs well in training you kind of get that extra bit of a high, after a match when you perform really well you get that extra high, so we are constantly striving for that as well as obviously winning, we want to win, but we are constantly striving for performances, it’s not pressure, it’s just something to go after.”

Dublin have come up against Cork, Galway and Mayo on a regular basis during the Championship over the last four season, this years final opponents Meath are a new proposition, is there a nervousness or an edge coming up against an unfamiliar team that play it slightly different than more familiar teams, are quite physical, quite defensive and are fast on the break.

“I think the devil you know is better than the devil you don’t know says Martha, so obviously we watched Meath they are a fantastic team, but watching them is not the same as playing against them so that brings its own huge challenge, because we haven’t played them competitively in a number of years that’s a huge challenge for us.

“They are a really young fit team, I just think that will be a challenge in itself, they are a really good team, we are not use to playing against their players so that should make it a really interesting match.”

Martha Byrne is usually given the task of marking the oppositions top forward, she was tasked with nullifying Armagh’s Aimee Macken in the All Ireland semi final last year, Emma Duggan is Meath’s key forward and has looked pretty sharp this year.

Will Martha be given the marking job on Duggan tomorrow in Croke Park, has there been any discussion how the Dublin defence are going to face up to challenge of curbing Duggan’s influence on the game.

“No nothing discussed yet, Emma Duggan is fantastic player, Meath have some great forwards but any defender who is given a job always takes it upon themselves in a really positive way so I’d imagine whoever is marking her will do a fantastic job, a lot of defenders will have tough jobs on Sunday but everyone will rise to that challenge.”

Leading up to finals pundits, journalists and supporters will look for something that might point to an advantage to one team or the other.

Dublin certainly have the advantage of experience playing in All Ireland Finals at Senior level, tomorrow will be Meath’s first ever Senior final.

Does that experience though give Dublin a distinct advantage, Martha Byrne doesn’t think it will be that big of an advantage and believes Meath’s youthful nothing to lose attitude will balance things out.

“I think our experience will be an advantage, but equally this Meath team have absolutely nothing to lose and they are on a fantastic streak so while we have experience in our corner, they have this let’s throw the kitchen sink at it, we have nothing to lose on their side.

“So I think for me those two things will balance out, they are a young team, they have no history on their shoulders or any massive emotion going into this, it’s just looks to me that they are young team who just can’t wait to play, so I think our experience and their sheer guts in terms of how they play will just balance out in the end.”

Before the current run of success started, Dublin suffered three heartbreaking final losses in a row to Cork, it’s fair to say each loss would have possibly increased the nervousness and tension going into each subsequent final.

Dublin finally got over the line in 2017 and have added three more titles since, but have those wins changed the mindset of the players in terms of nerves and tension before games, not so according to Byrne who says the players still get just as nervous now for every match, but she also sees that as a major positive as it shows there is no complacency within the squad despite their success over the last four years.

“Definitely not, unless I have Ciara Trant beside me calming me down, I definitely still get as nervous for every match which I suppose is a good thing as there is absolutely no complacency in our camp whatsoever.

Live-Steaming of 50 games in the 2021 Lidl Ladies National Football...

Bigger and Better For Gaelic4Teens As 30 Clubs Announced For 2020...