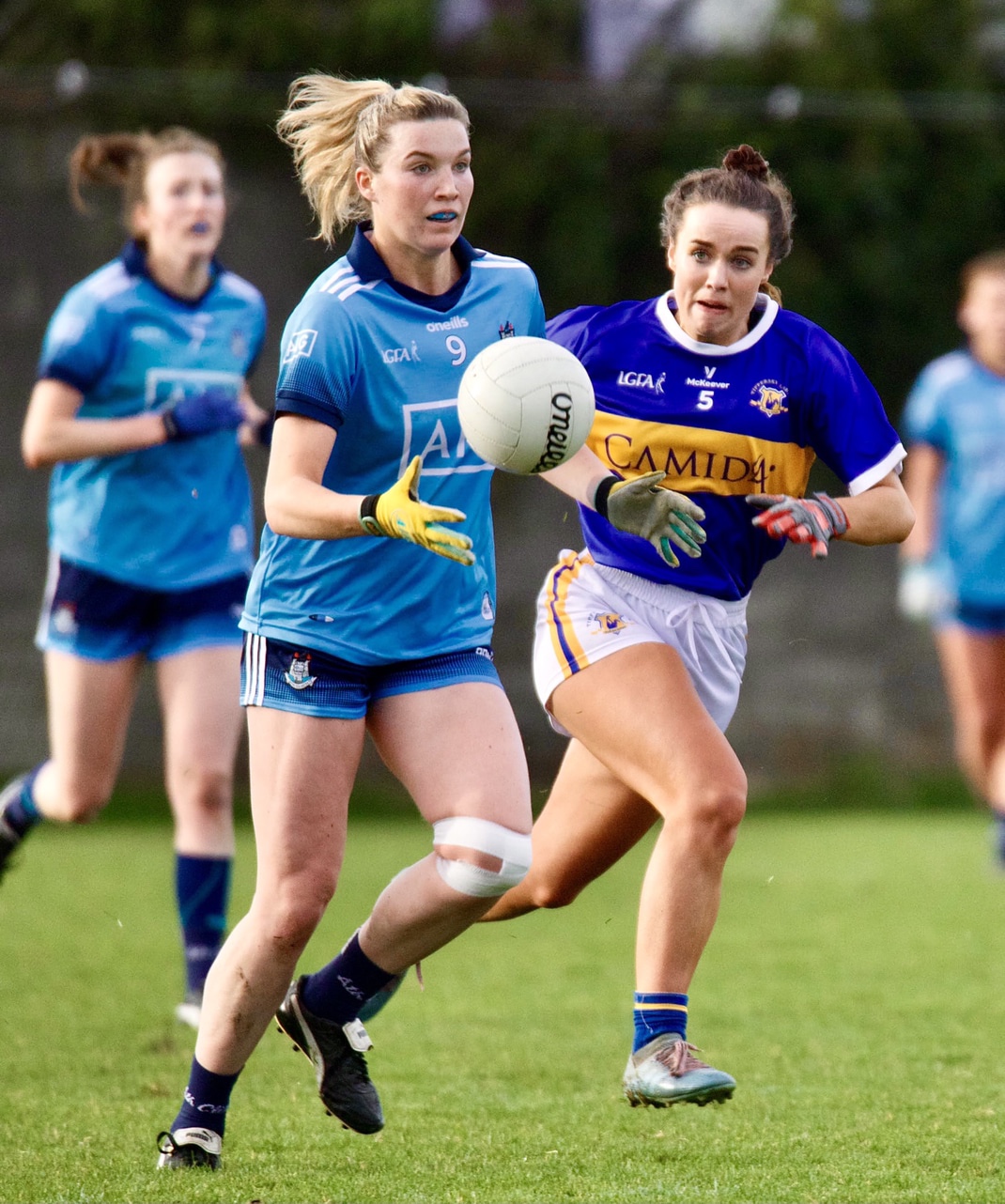 A huge weekend lies in store in Round 3 of the Lidl Ladies National Football Leagues – with semi-final placings and dreaded relegation play-off slots to be confirmed.

The clash between Tipperary and Dublin on Saturday evening (Semple Stadium, 6.30pm), is the live TV offering, with the weekend’s other 14 games available to viewers free at https://page.inplayer.com/lidlnfl/

Two counties from each group will progress to the semi-final stages, with the bottom teams in Divisions 1A, 1B, 2A, 2B, 3A and 3B all facing relegation play-offs to preserve their divisional status.

Lidl National Football League Round 3 fixtures, All games at 2pm unless stated.

Wicklow have been consigned to a relegation play-off against Down or Fermanagh – while Laois are aiming to finish the group stages on a high.

The O’Moore County have been the team nobody’s managed to beat in Division 3B thus far – and it would take a huge effort from Wicklow to change that.

Wicklow have been forced into some late changes to their starting line-up – with ace forward Meadhbh Deeney now listed between the sticks.

Lidl National Football League Round 3 -Division 1B – Live on TG4

Table-toppers Dublin will aim to finish the group stages with a third consecutive win and with progress to the last four already secured, manager Mick Bohan can experiment with five changes in personnel.

Tipperary are facing into a relegation play-off but ill hope to put up a decent display against the visiting TG4 All-Ireland Senior champions to boost confidence levels.

Having lost out to Cork in Round 1, a disappointing home reverse against Waterford last weekend has left the Premier County sweating on top flight status.

The TG4 cameras will visit Semple Stadium in Thurles for this one – with Dublin already showing ominous early season form.

Westmeath must win and hope that Galway beat Donegal to avoid a relegation play-off.

In that case, Westmeath and Mayo would be locked together on three points – but Westmeath would survive on the head to head rule, even if they have an inferior scoring difference.

A Donegal win over Galway, and Westmeath to beat Mayo, would leave Mayo, Galway and Westmeath all level on three points each, but that’s when scoring difference would likely punish the Midlanders.

In an extremely tight group, even a win might not be enough for a semi-final berth for Mayo, should Galway beat Donegal.

Mayo’s task is to win by as big a margin as they can, and then they’re reliant on the outcome of the Donegal-Galway game.

Donegal have won their opening two games but they’re still not assured of a semi-final spot.

Visitors Galway must win to put themselves in the mix for a spot in the last four, while both sides will also be keeping a close eye on events in Mullingar, where Mayo play Westmeath.

Bowing out in the group stages would be disappointing for Galway, who contested the 2019 League Final.

The Tribeswomen are blending some exciting young players with more established stars and it’s a work in progress for new boss Gerry Fahy – but they’ll be anxious to give themselves a chance of a knockout place here.

This one is beautifully poised – with the winners guaranteed a place in the semi-finals.

A draw would make things really interesting, with the team registering the most points (scores over the bar) progressing to the semi-finals.

If they’re still not separated, it will come down to score difference, with Cork currently +11 to Waterford’s -6.

Waterford’s victory over Tipperary last weekend was a key game for the Déise, as it erased any relegation fears, but the manner of that win has sparked real hopes that they could go further in the competition.

Should holders Cork progress, they’ll have earned it against the hosts.

Kerry, with two wins from two, will be fancied to finish their group campaign with another victory against struggling Wexford.

The Kingdom will line out at Fitzgerald Stadium with wins against Meath and Clare under their belts, and they’re safely through to the semi-finals.

Irrespective of what happens here, Wexford will be facing into a relegation play-off.

Meath hammered Wexford last weekend and another win here would see the 2020 TG4 All-Ireland Intermediate Champions through to the semi-finals.

It’s a winner-takes-all clash for second place as Clare make the trip to Páirc Tailteann in Navan.

Going on a straight line of recent form, Meath will be favourites for this one. Clare beat Wexford with just a point to spare, while Meath had 33 points to spare against the Model County.

The all-Ulster group is a fascinating one – and Tyrone could yet save themselves from a relegation play-off.

If the Red Hands defeat Monaghan in Clones, they’ll hope that Armagh can gain a positive result in their clash with Cavan.

If Tyrone and Monaghan are the only teams that finish level on three points in the group, Monaghan will be consigned to the relegation play-off.

In a pool with all sorts of potential permutations, a Monaghan win might not be good enough for the semi-finals, as an Armagh win over Cavan would see Cavan, Monaghan and Armagh all on six points then, with score difference coming into play.

Cavan have two wins from two – but are still not guaranteed a place in the semi-finals.

Depending on Sunday’s results, Cavan, Monaghan and Armagh could all finish the group stages on six points, and then it will come down to scoring difference to see who goes through.

But Cavan will fancy their chances and their early-season form under new manager Gerry Moane is eye-catching.

Armagh lost out to Monaghan in Round 2 and are now sweating on a semi-final slot.

But they could be looking over their shoulders too as a Tyrone victory over Monaghan, and Cavan to beat Armagh, would leave Monaghan, Armagh and Tyrone all on three points then, with two making the semi-finals, and the other in a relegation scrap.

Fermanagh and Down clash in a straight fight to avoid a relegation play-off.

Both sides have lost their opening two games and it all boils down to this one to avoid the bottom placing in Division 3A.

Down have the better scoring difference (-11) compared to Fermanagh’s -15 and it could yet boil down to that.

At the other end of the table, Connacht rivals Sligo and Roscommon clash for top spot.

The winners of this one will top the billing in Division 3A, and earn a semi-final place against the second-placed team in Division 3B.

Roscommon have been scoring more freely than Sligo in the competition to date, but they’ve also conceded more.

This should be a closely-contested encounter, in keeping with recent meetings between the counties.

With Laois guaranteed top spot, Kildare and Longford will battle it out for the second place on offer in the table, and a semi-final berth.

Kildare and Longford have both accounted for basement team Wicklow – but they both fell at the hands of Laois, who have been impressive.

Now it’s all on the line at Hawkfield, where Kildare will be aiming to make home advantage count in a key Leinster derby.

This is another group where the semi-finalists could be determined on scoring difference.

Leitrim lead the way on six points and with the best scoring difference but they could yet finish level with Louth and Antrim.

Louth will need to beat Derry and Antrim have to get one over on Leitrim for that to happen – and then score difference would decide all.

Antrim host Leitrim in what is a must-win encounter for the Saffrons.

An Antrim win will put them in the mix for a semi-final place but they’ll start as outsiders to make the last four due to a -6 scoring difference and Leitrim’s good form.

A draw might be enough for Antrim, though, but they would be dependent on Derry beating Louth in the group’s other game.

With Offaly safely through to the semi-finals as group winners, it all boils down to this for Limerick and Carlow.

It’s a straight shoot-out for the remaining semi-final slot on offer from Division 4B.

The LIT Gaelic Grounds will host what could be one of the most fiercely-contested fixtures of the weekend.