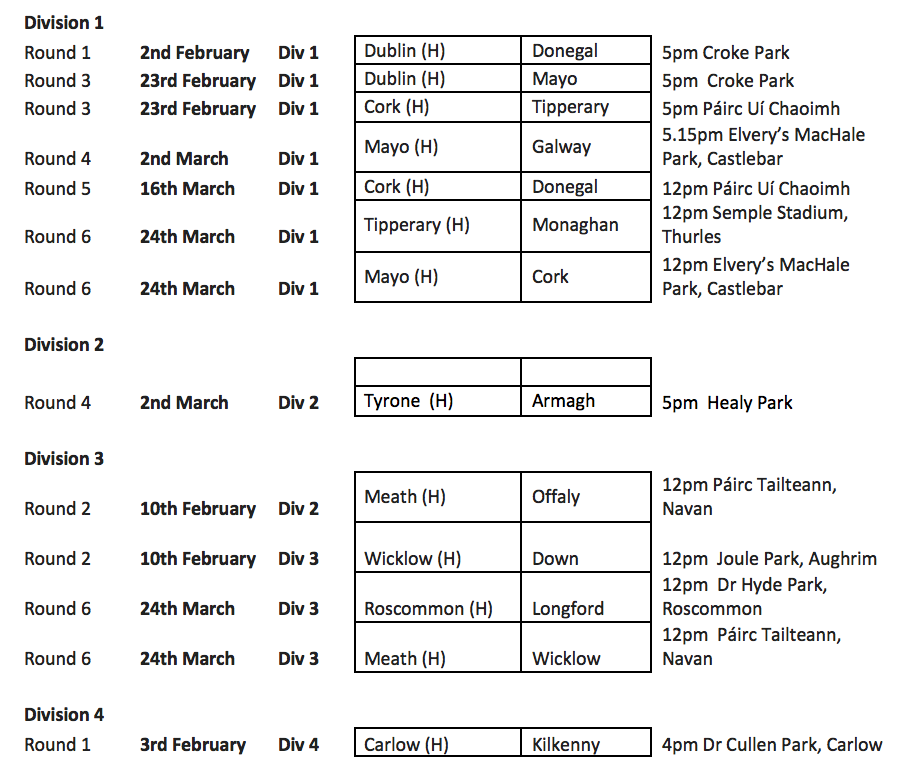 THE Ladies Gaelic Football Association has released the full list of 13 confirmed double-header fixtures during the 2019 Lidl National League campaign.

Lidl NFL Division 1 holders and TG4 All-Ireland Senior Champions Dublin will play two fixtures in front of the eir sport cameras at Croke Park, while Cork have two games alongside their male counterparts at Páirc Uí Chaoimh, including an historic first-ever appearance at the Leeside venue against Tipperary on Saturday, February 23rd.

A double-header for the Mayo Ladies Footballers has also been pencilled in for March 2 at Elvery’s MacHale Park in Castlebar against Connacht rivals Galway, with the men’s fixture between the two counties to follow later in the evening.

In addition, Tipperary have a home clash with Monaghan in Division 1 at Semple Stadium in Thurles on the same day.

In Division 2, while Tyrone will play Armagh at Healy Park, Omagh, on March 2nd.

In Division 3, Meath have secured two home double-headers at Páirc Tailteann in Navan, Wicklow and Roscommon have also confirmed double-header fixtures, with Carlow hosting Kilkenny in Division 4 on February 3rd.

The LGFA would like to thank the GAA boards in the various counties for their cooperation in ensuring that this increased number of double-headers in 2019 has become a reality.

The LGFA would also like to thank Cork Senior Ladies Football team manager Ephie Fitzgerald for agreeing to release the dual players on his panel on March 24th, should Cork qualify for the National League Division 1 Camogie Final, which is fixed for the same day.

The full list of double header fixtures are as follows

Round 1: 2nd of February

Round 1: 3rd of February