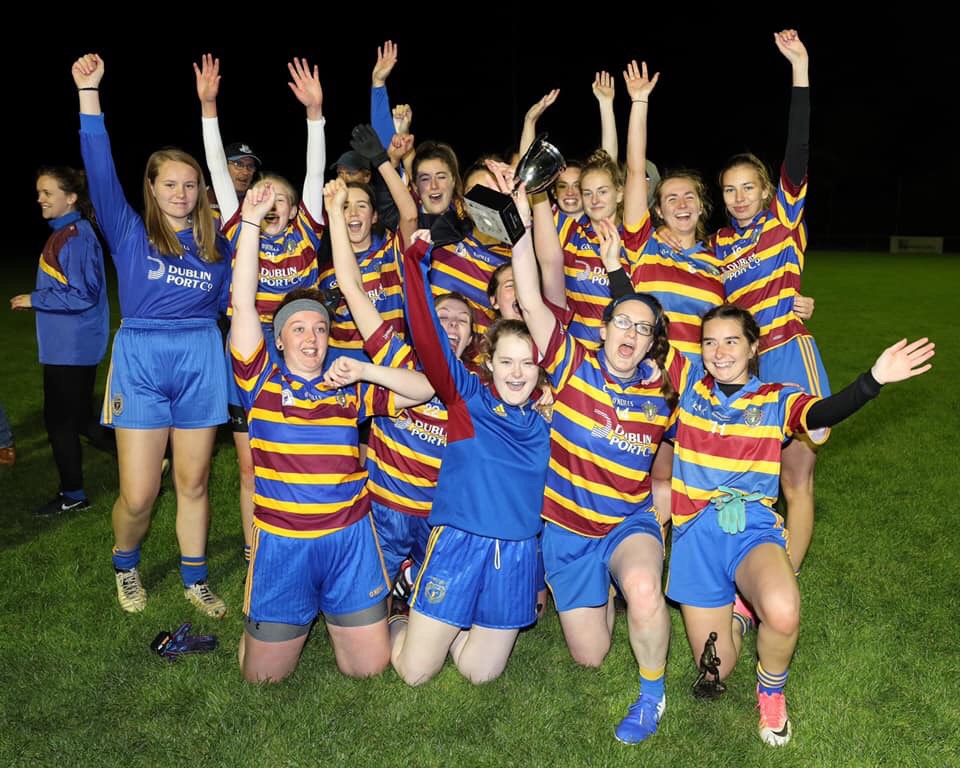 This grade continues to provide excellent football, and keenly contested battles, and like 12 months ago, when St James Gaels accounted for Erins Isle B in the decider, again a point proved to be the winning margin.

Shankill led by 3-1 to 0-5 at half-time, with goals from Aisling O’Leary and Ailis Conlon, but it looked like Scoil Uí Chonaill were odds on victors with 11 minutes of normal time remaining, after bursting out of the blocks in the second half to fire 2-5 unanswered.

Indeed Shankill didn’t score until the 51st minute, when Conlon completed her hat-trick; to ensure for a tense finish, and real edge of the seat fare in the closing minutes.

Shankill went long periods of this game without scoring. After a sixth minute goal put them two points clear, they failed to add to their tally for almost another 14 minutes.

Likewise they went 20 and a half minutes without a score in the second half, with scoring opportunities rare for the South Dublin side at stages in this game, particularly in the third quarter.

Like in their semi-final win over Beann Eadair, Scoil Uí Chonaill conceded five goals over the hour, with three of these coming in the opening half of the final.

However, Scoil Uí Chonaill got off to a strong start, with captain Aideen Naughton leading by example with the first of her four points of the opening half coming after just 20 seconds to give her side an early lead.

Sarah Keohane also showed well in defence for Scoil Uí Chonaill in the opening minutes, but Shankill got in for their opening goal after five and a half minutes, when Aisling O’Leary’s dipping shot in towards the square finished in the back of the net.

Scoil Uí Chonaill weren’t fazed by this and continued apace with a point from Naughton either side of a Holly O’Rourke-Keane score placing them 0-4 to 1-0 ahead after 16 minutes.

Shankill responded by pressing hard for scores, with Grace O’Neill and Conlon combining before the latter shot wide, before a strong spell of accuracy by the white and blue clad side.

Conlon grabbed both of Shankill’s next two scores – with 1-1 inside 100 seconds.

Firstly she scored her only point of the game, and then O’Neill and Conlon once again linked up before Conlon’s opening goal helped her side to a 2-1 to 0-4 lead in the 21st minutes.

Scoil Uí Chonaill cut the gap with Naughton’s fourth point, before she tried to get through for a goal, but Shankill keeper Ash Schutte performed well.

It was Shankill who bagged a goal before the break, as Conlon got in to ensure a green-flag was raised for her side for the third time, and help them to a 3-1 to 0-5 interval lead.

The picture took a turn on the restart as Scoil Uí Chonaill burst out of the blocks.

Shankill were on the rocks as Scoil scored 2-5 unanswered, with a score a minute in the opening stages of half, as they registered 1-4 without reply inside five minutes of the restart.

Katie O’Rourke-Keane opened the second half scoring with a point, before Caoimhe Keohane claimed their opening goal.

Shankill sensed they needed to make changes, with Louise Ryan, Zoe Donoghue and Alex Molloy introduced; and they began to make a difference.

However, they took time to find their shooting boots, registering two wides; including a goal miss, before Scoil Uí Chonaill continued to add to their tally.

Player of the Match De Buitlear brought her tally for the half to 1-3, with a dipping goal from an acute angle and then a 49th minute point; before Shankill eventually got off the mark.

Conlon completed her hat-trick, before Lisa Morgan added a point from close range, and then a dipping free from Grace O’Neill finished to the net.

This handed Shankill a one-point lead with four and a half minutes of normal time remaining, but Scoil Uí Chonaill weren’t finished yet.

Naughton tied the game 90 seconds later with her sixth point, and while both sides missed chances in the latter stages, De Buitlear got in for a late winner, despite pressure from Shankill’s Zoe Donoghue.

After the game Scoil Uí Chonaill captain Aideen Naughton received the Cup and paid tribute to her side for their strong work-rate and commitment in the last eight weeks to help them take the title.