Goals in either half from Julia Buckley and Cassie Sultan were decisive at Parnell Park on Friday night as Kilmacud Crokes made history by claiming the Go Ahead Dublin Senior Ladies Football Championship crown for the very first time.

Coming up against maiden senior finalists in Thomas Davis, Crokes were forced to dig deep before adding their name to the Michael Murphy Cup.

Meadhbh Deeney and Ciara McGuigan flew the flag for Davis’, but with Sultan shaking the back of the net deep into second half stoppage-time, it was the Stillorgan women who ultimately prevailed in the end.

Incredibly, this was the fifth competitive meeting between these two teams in 2022 alone.

In the group stages of the championship at Pairc de Burca on August 31, Crokes came away with a comprehensive 3-9 to 0-4 victory.

However, Crokes subsequently gained revenge on their fellow southsiders by defeating them on a scoreline of 4-11 to 4-7 in a Cup decider in Kiltipper on July 13.

There were several past and present inter-county players on show for both sides, with current Sky Blues stars Lauren Magee, Aoife Kane and Kate McDaid all included in Crokes’ starting line-up. Molly Lamb, Eabha Rutledge and Michelle Davoren have also represented Dublin at senior level in the past, while goalkeeper Dearbhla Gower was a member of the Galway panel as recently as 2021.

Although Tammy Quinn Corbally was the only active Dublin footballer in the Davis’ side, team captain Siobhan McGrath, Olwen Carey and Ciara McGuigan previously represented the Jackies with great distinction. Joining McGuigan in the Tallaght outfit’s full-forward line was Wicklow attacker Deeney.

One of their star performers in last week’s semi-final win over St Sylvester’s, Davoren got the ball rolling for Crokes with a superb point on the turn inside the opening 10 seconds of the action.

The dependable Kate Murray followed with a brace of points from frees, before Davis’ own dead-ball specialist Deeney disrupted this scoring sequence at the opposite end.

From a tricky right-hand angle, the Garden County ace split the uprights in clinical style to get Peter Boland’s side up and running. Davis’ were hoping to push on from here, but a couple of wayward efforts on their part released the pressure on the Crokes rearguard.

In stark contrast, Kilmacud came away with a score from their next foray into attack – Murray knocking over a routine close-range free to bring her personal tally up to 0-3.

Heading into the second-quarter, Buckley was the only member of the Crokes inside line who hadn’t added her name to the scoresheet. That changed dramatically in the 17th-minute, when the former Dublin camogie player cut in from the right-wing and proceeded to evade a series of challenges on her way to registering an outstanding solo goal.

Although this was a significant set-back for Davis’, the initial response from the Tallaght women was impressive. Supplementing unanswered frees by Deeney and McGuigan, Norah Kirby broke through the heart of the Crokes defence to kick their maiden score from play.

While they were coming under pressure for the first time in the contest, there was no sense of panic within the Kilmacud ranks. After Murray fired over on the loop with 22 minutes on the clock, Buckley and Mia Jennings also found the range to propel Crokes towards a 1-7 to 0-4 interval lead.

Paddy O’Donoghue’s charges maintained this momentum on the resumption with Davoren recording her second point of the game at the tail end of a prolonged attacking move.

The Davis’ management introduced Orlagh McGuigan as a half-time substitute and her hard work provided the platform for her sister Ciara to convert her second free of the tie. Niamh McGoldrick and Emma Whelan were also added to the mix in advance of Deeney curling between the posts from the left-hand side – giving fresh impetus to the Davis’ challenge in the process.

Even though Crokes remained firmly in the ascendancy, they came under intense scrutiny as the third-quarter progressed. In the space of just two minutes, Deeney, Sinead Deegan and full-forward Rachel Newell all raised white flags to suddenly leave just two points between the teams (1-8 to 0-9).

This asked serious questions of the Crokes resolve, but a Laura Kane single on 48 minutes certainly helped to ease the tension within their ranks. Yet Davis’ simply refused to give in and another Ciara McGuigan point left the tie delicately poised heading towards the home stretch.

Much like their opponents, Crokes strengthened their pack by introducing a couple of familiar faces from their bench. Moments after ex-Dublin forward Amy Conroy was introduced, Irish hockey international Deirdre Duke also took her place on the field.

Crokes were reduced to 14 during a tense finale, however, with Aoife Kane receiving a yellow card for a heavy tackle on opposite number Tammy Corbally Quinn. Ciara McGuigan added two more points to her individual haul, but the crucial score of the game was squeezed in between her brace.

After she was picked close to the Davis’ posts, Crokes substitute Sultan powerfully drilled a shot beyond the reach of Caitlin Staunton. There was a last-gasp opportunity for Thomas Davis to force the game into extra-time, but Carey palmed agonisingly wide off McGoldrick’s crossfield delivery.

Go Ahead Player of the Match: Michelle Davoren (Kilmacud Crokes) 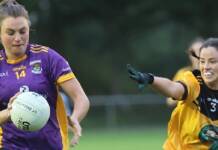