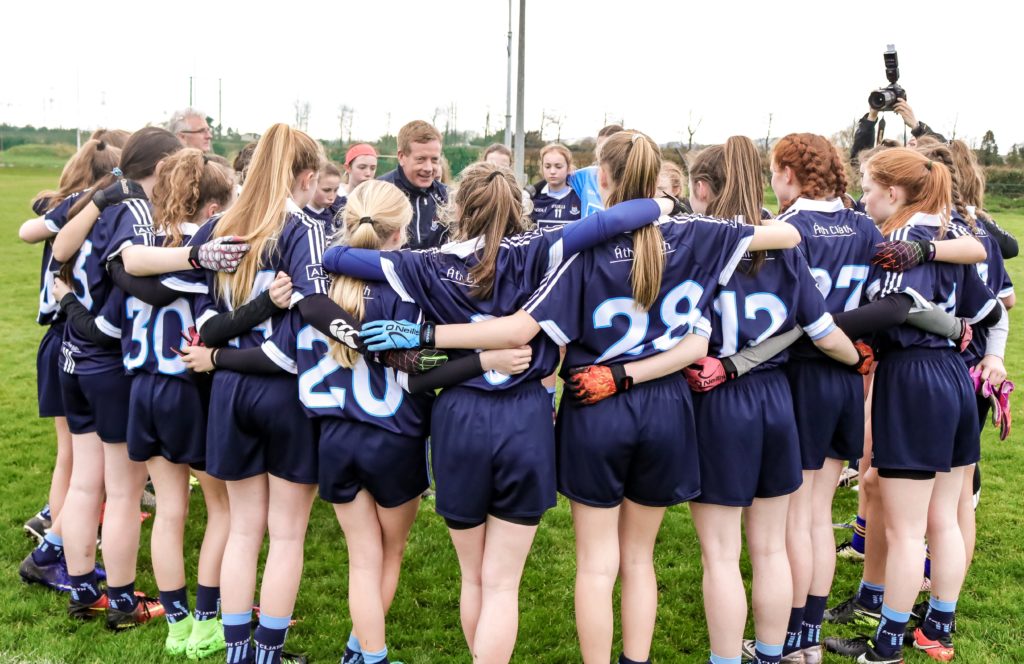 There was a feast of goals this afternoon in Hawkfield GAA Club in Newbridge as Dublin’s U14 Ladies Footballers faced Kildare in their first round Leinster Championship game.

The last time the sides met at this grade was in the 2016 Leinster Final and it was a highly thrilling encounter with the Lilywhites coming out on top.

Today it was the turn of the girls from the capital to lay down a serious marker for the season ahead with 26 point victory containing a powerful display of inventive attacking football.

The game started off at breakneck speed as both sides endeavored to impose their will on the game. The tricky underfoot conditions and uneven surface were not ideal for free flowing football, but both sides made light of the playing surface to serve up an action packed game full of high quality football. 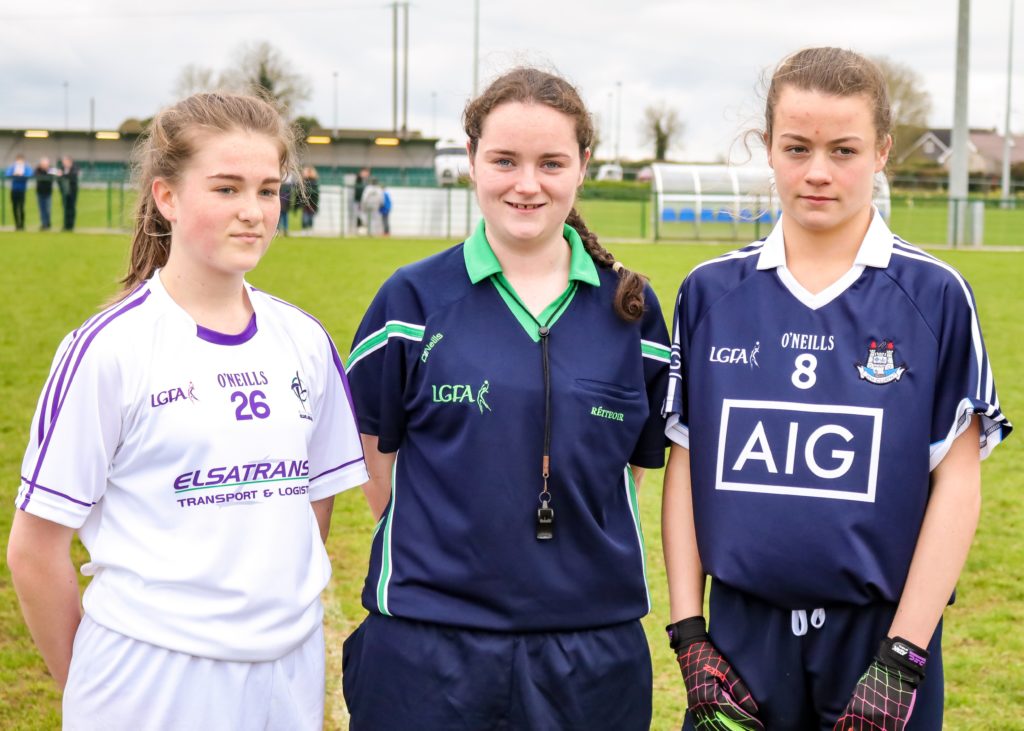 Kildare got off to the perfect start inside the opening two minutes when Miah Ryan cut in from the right to receive the ball and blasted it to the back of the net.

That lead only lasted a minute as Katie O’Sullivan made a powerful run through the Kildare defence and grabbed her first goal of the game to bring the sides level.

Kildare though looked sharp early on and their running game and quick offloads were causing the Dublin defence some problems. The girls in white restored their lead with two quick points in the space of a minute from Eimear Hanlon and Miah Ryan.

The Dublin defence though soon got to grips with the Kildare tactics and cut off the avenues of attack. This allowed the girls in blue to dominate the possession and they made it count. 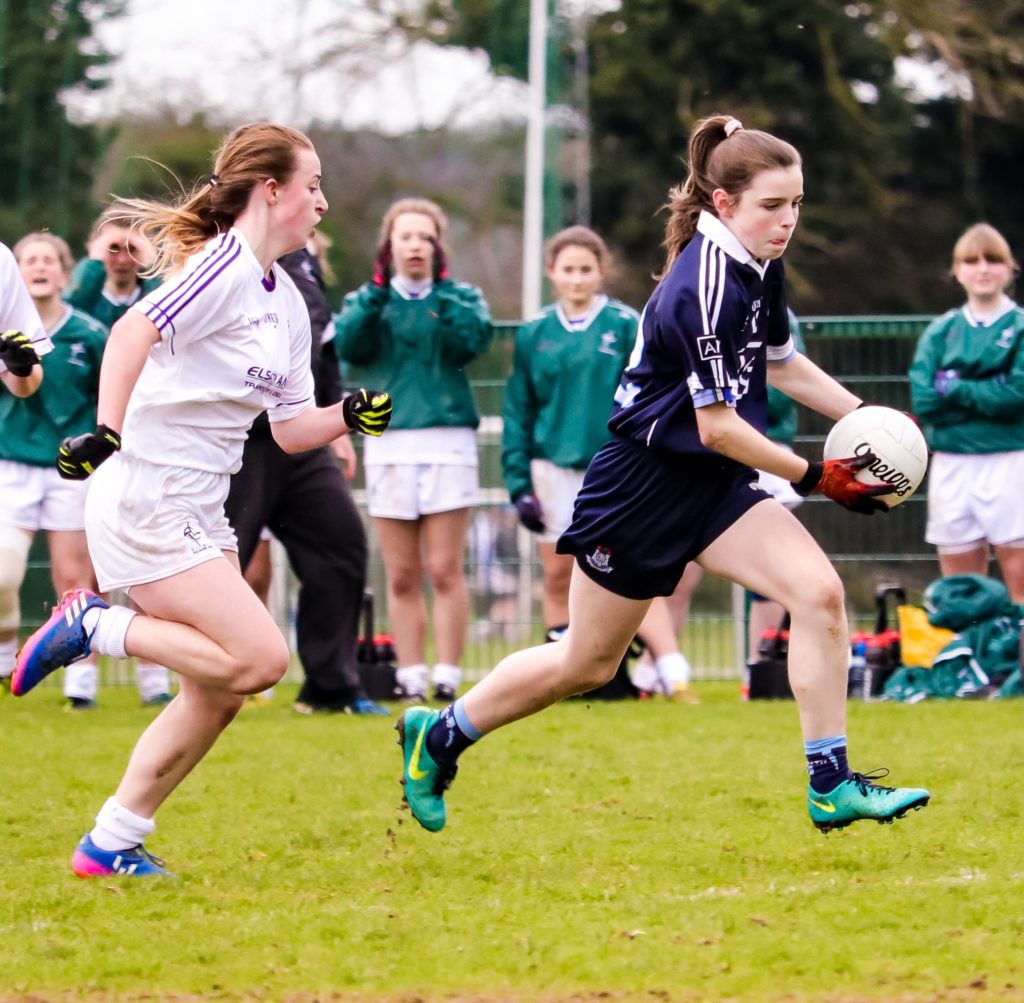 Dublin ran riot hitting 5-03 without reply to all but finish the game as a contest with still just over a half to play.

Aishling O’Neill got the ball rolling with a well taken goal after beating three would be tacklers with a run from deep. Two points thirty seconds apart from the impressive Katie O’Sullivan and Jennifer Hanrahan, put the Dubs four in front.

Kildare were struggling to get out of their own half as Declan Darcy’s charges penned them in. The pressure told as the young Dubs helped themselves to two more goals, the first was a brilliant finish from Aishling O’Neill and the second came from Katie O’Sullivan after a defence splitting run.

The relentless attacking from Dublin continued unabated, Ellie Young scored an excellent point and from the resultant restart Dublin claimed the ball, three passes later and Kildare were forced into a foul in the square and Katie O’Sullivan dispatched the resultant penalty with aplomb. 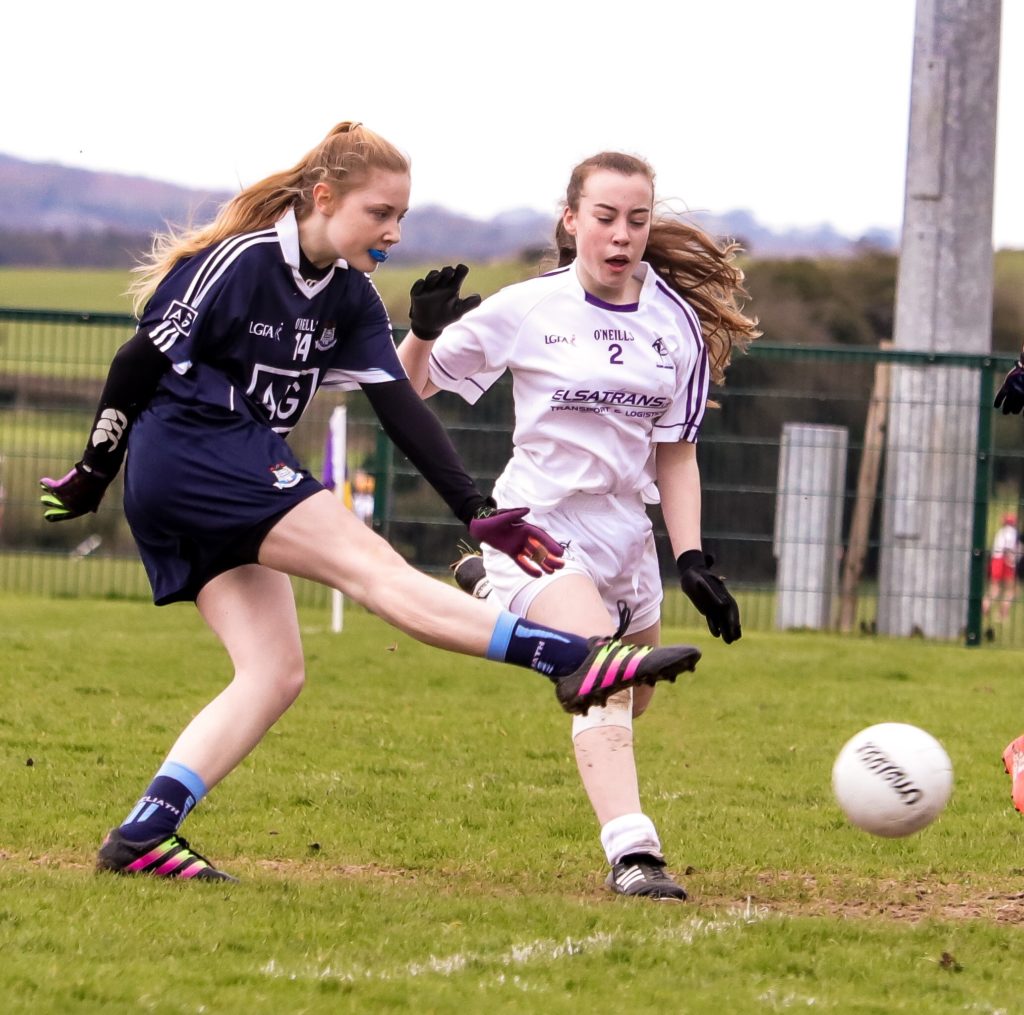 With seven minutes to the short whistle the irrepressible Katie O’Sullivan grabbed her fourth goal of the half with another sublime shot.

Finally after a twenty minute barren scoring spell Kildare added to their tally with a point from left half forward Ava McEvoy.

But a devastating two minute spell from the girls in blue ended any real hope for their hosts of a comeback as Dublin made it a total of eight first half goals. Katie O’Sullivan scored her fifth of the contest and Aishling O’Neill brought her total number of goals to three with a clever finish. Jennifer Hanrahan constantly involved in good Dublin build up play, finished another fine passage of play with a well struck point.

In fairness to Kildare they never threw in the towel and battled gamely finishing with the last three points before the break from Eimear Hanlon, the first from a free and two fine efforts from open play to leave her side trailing by nineteen points with the score 8-04 to 1-06 in Dublin’s favour.

With such a big lead Dublin might have been forgiven for easing off the gas a little in the second half, but neither side dropped the frenetic pace of the first period. 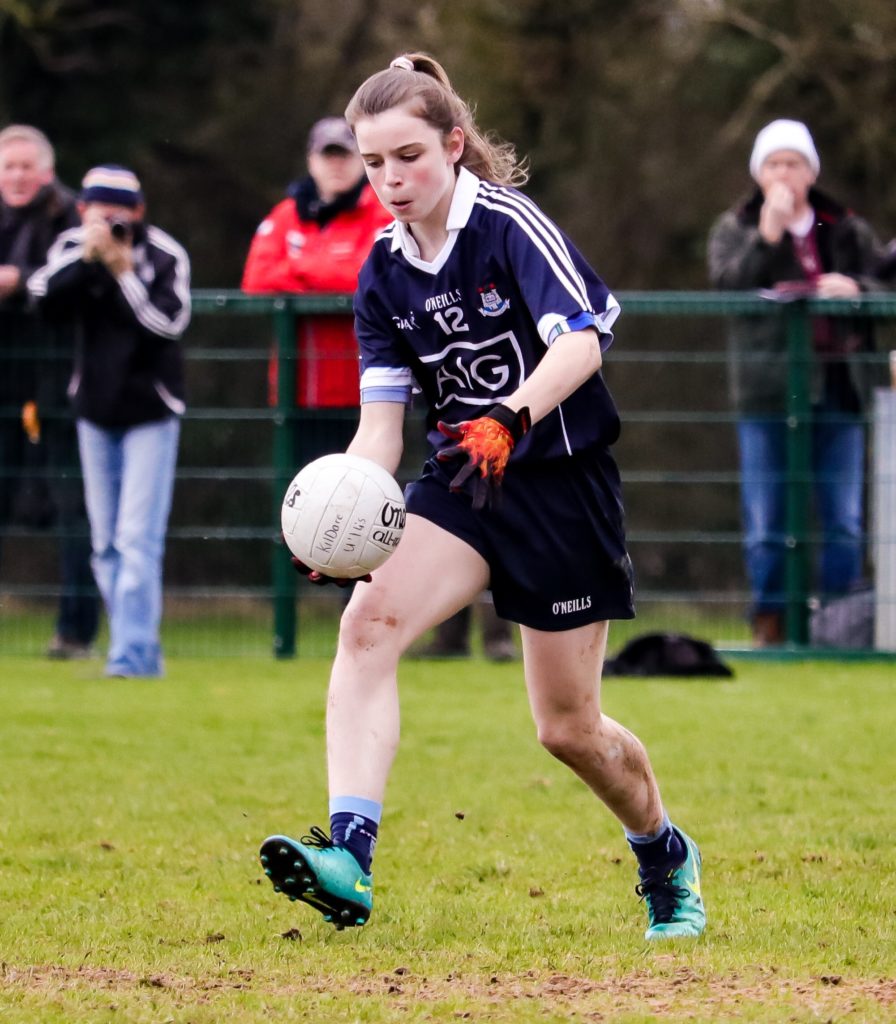 Kildare out scored their opponents 0-04 to 0-02 in the opening seven minutes after the break. Dublin opened the scoring with a great point from midfielder Ali Griffen, Kildare responded with a point from Holly Tyrell which was cancelled out with another well struck point this time from the boot of Dublin’s Ciara O’Connor.

The girls in white then enjoyed a purple patch and scored three points in a row, two from play by Holly Tyrell and Eimear Hanlon and an Alice Breen free.

But Dublin always looked the more potent attacking outfit with the bigger goal threat and so it was to prove. A Ciara O’Connor point was quickly followed by two quick fire goals in as many minutes.

The first was a well worked move from their own 45, the ball was worked forward with a couple of pinpoint foot passes, Katie O’Sullivan got in behind the Kildare back line and was picked out with a ball over the top, she turned headed towards goal and placed the ball past the on rushing Kildare keeper.

A minute later Aishling O’Neill after some good approach play, cut in from the right wing and hit a stunning shot into the top left hand corner of the net for her fourth and Dublin’s tenth goal of the game. 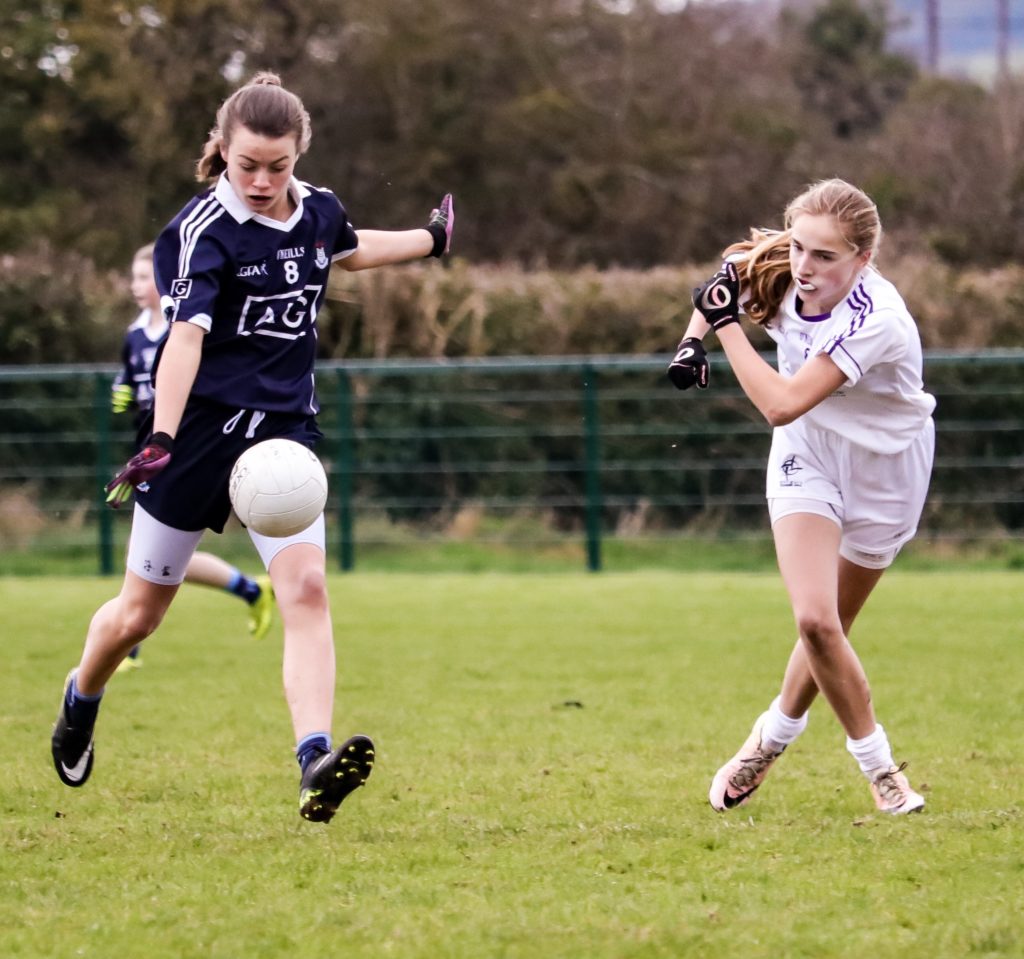 With twenty minutes to go Hayley Wiltshire stopped the one way scoring traffic with a good point. But Dublin were just so much on top at this stage it hardly registered as the girls in blue went on another scoring rampage grabbing another 1-04 without reply.

Points came via Eimear Mangan (2), Emma Kane and Jennifer Hanrahan and Katie O’Sullivan made it an incredible seven goals to her name with another cool finish. It could have been even worse for Kildare as just like the first half, Dublin hit the crossbar and also the post with two goal attempts.

Both sides rang the changes with a multitude of substitutes for both sides. The changes seemed to ignite Kildare for one last push and they outscored Dublin 0-05 to 0-01 in the closing minutes.

There was still time for some late drama before the final whistle. Dublin’s substitute goalkeeper Molly Cassidy was only on the pitch a matter of minutes when she was adjudged to have commuted a foul in the square that she received a yellow card for and was sent to the sin bin and Kildare were awarded a penalty.

With no keeper on the field of play another second half sub Eabha Mooney playing at full back assumed the goalkeeping duties and pulled of a fine save to deny Kildare a consolation goal. 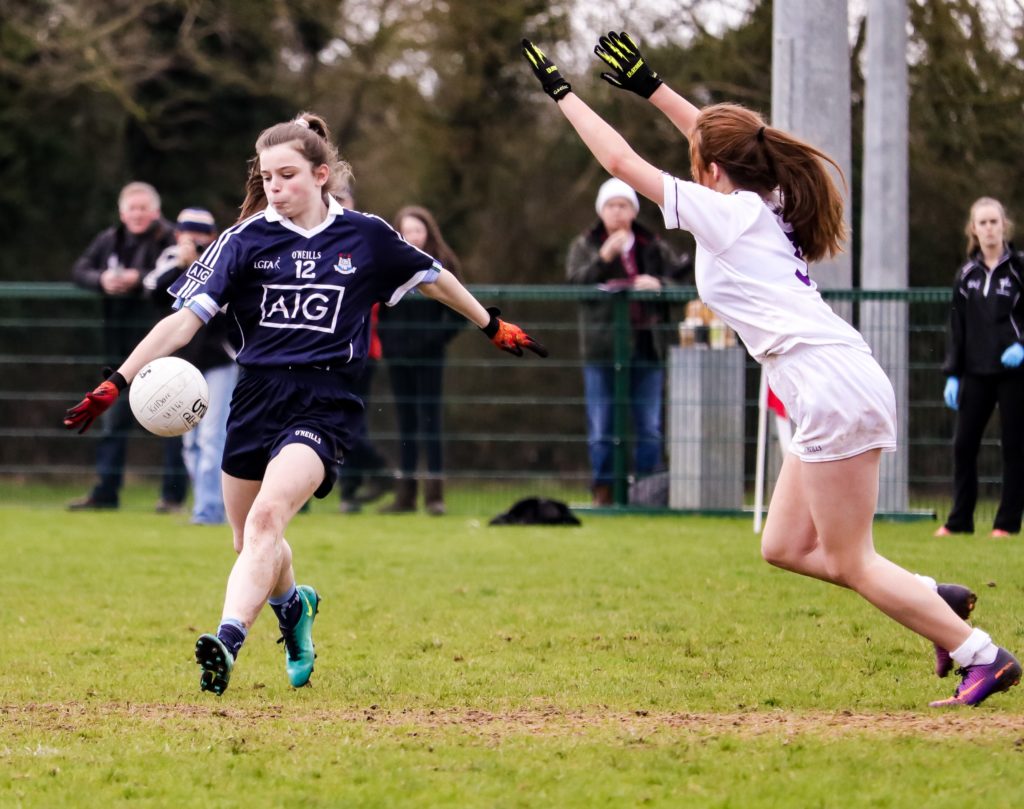 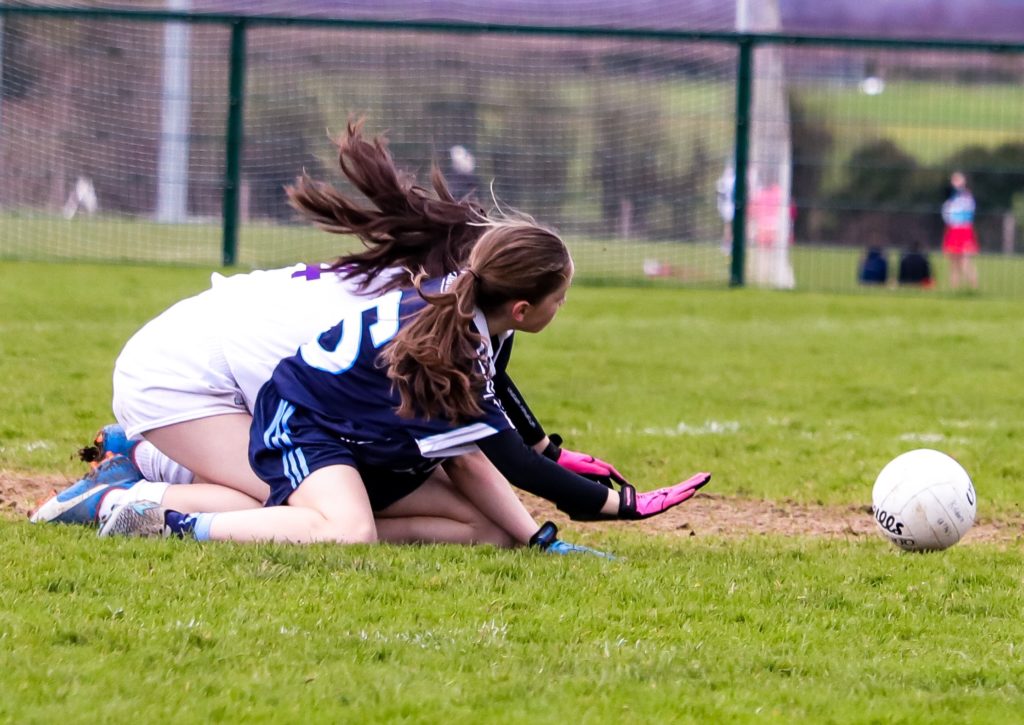 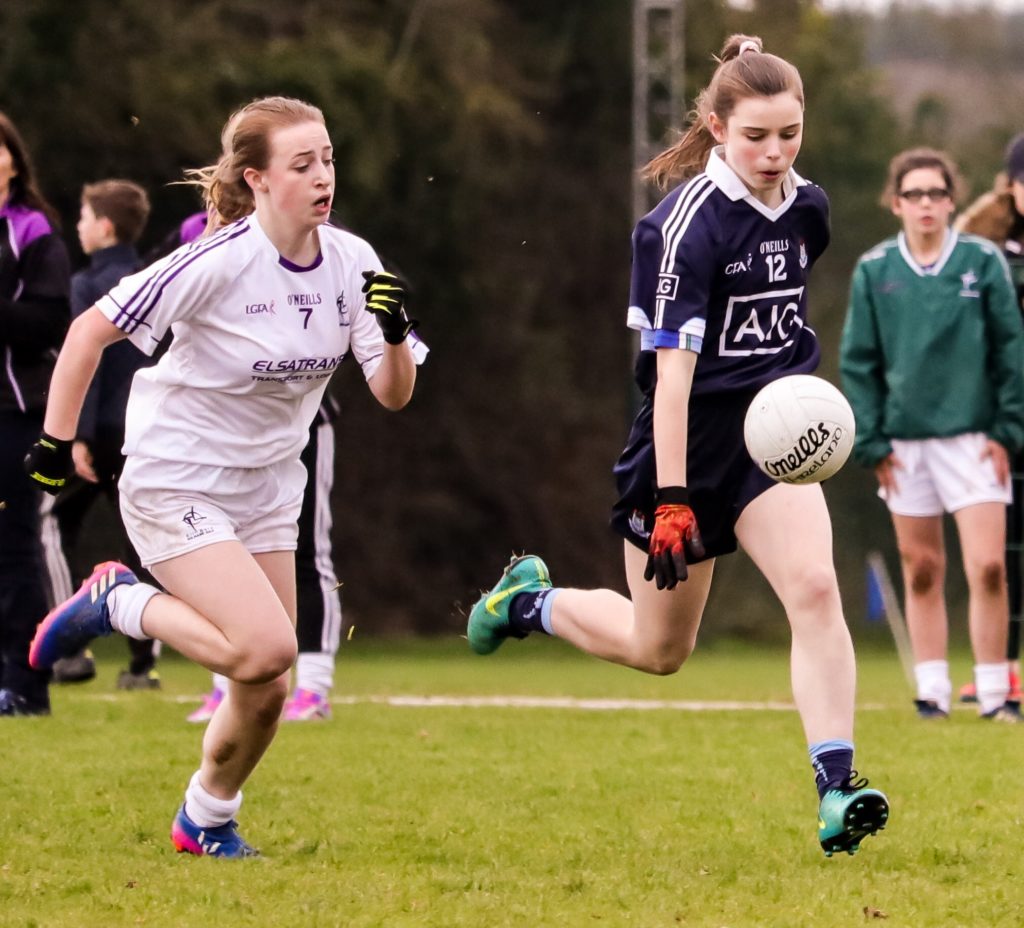