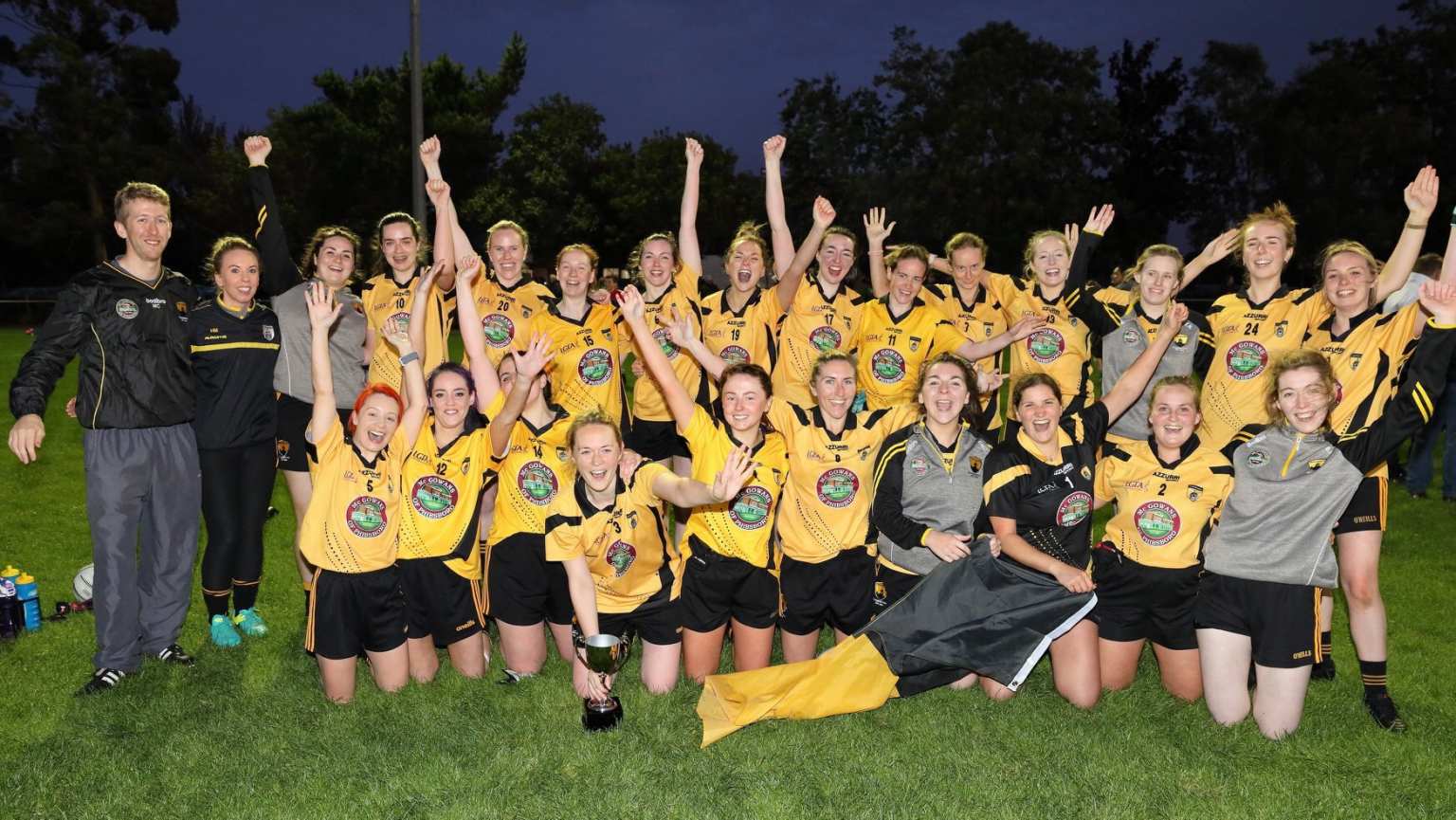 St Brendan’s scored just one second half point, but they done enough to capture the first ever Dublin Junior ‘H’ Ladies Football Championship title in St. Margaret’s on Wednesday night.

It capped off a fine week for the Grangegorman club, after taking the Junior ‘C’ title last Friday night, following victory over Crumlin in that decider.

A solid spell from 14th minute until half-time provided the basis for this win, with St Brendan’s scoring 3-4 unanswered during this period, after the sides had been well matched early on.

St. Brendan’s went at this game from the off, and forced an early 45 metre free, which was played short, before Karen Tighe registered the opening score of the match after just a minute.

Erin Go Bragh quickly equalised through Aoibhinn Burke, after good work by Jessica Carroll, before Carroll put the Castaheaney/Littlepace/Ongar side ahead with their second score.

EGB’s defence was coping well under pressure at this stage, with good work from the likes of goalkeeper Ciara Farrell and corner-back Amy Flanagan.

They extended their lead to two points after six minute thanks to a Niamh Maher pointed free, but failed to add to this, after Laura Scuffil kicked their first wide in the eighth minute.

EGB’s Fiona Power done well in snuffing out a St. Brendan’s attack – and it was a sign of things to come from the full-back, who really kept her side in contention throughout, and unsurprisingly claimed the Player of the Match award after the game.

St Brendan’s brought the game level for the second time, thanks to points from Siobhan Maloney and Marina Kilduff (free), before EGB hit a purple-patch once again.

From the kick-out, EGB won possession at midfield through Niamh O’Sullivan and worked the ball in to Niamh Shine. A dipped effort from Aoibhinn Burke was finished to an empty net by Jessica Carroll.

This ensured a 1-3 to 0-3 lead on 11 minutes, before Niamh Shine quickly followed up with a point from the resulting kick-out.

Momentum was with EGB at this stage, but they failed to build on this on the score-board.

Ciara Farrell pulled off a save from a Kilduff one-on-one effort, before St Brendan’s added to their scores.

An Emma Duffy point, and a cracking goal from Karen Tighe levelled the game at 1-4 apiece at the end of the first quarter.

As the floodlight’s came on, St. Brendan’s continued to place huge pressure on the EGB defence, but once again backs came to the fore.

Fiona Power was again solid, while Amy Flanagan also put in good work at this juncture.

Kilduff was fouled for a 21st minute penalty, but crucially Roisin Toomey only sent the resulting place-kick over the crossbar.

This handed St Brendan’s a lead they wouldn’t relinquish, with Duffy adding a point, before a Kilduff dipped effort from the edge of the semi-circle ended in the back of the net.

Kilduff added another point, before bringing her tally to 2-2 by the interval, as she delivered a second goal just before the break, to ensure St. Brendan’s led by 3-7 to 1-4 at half-time.

Scores were at a premium on the restart, and indeed none were produced in the third quarter.

A combination of some good defending and missed chances were the main taking points for this period, with EGB registering four wides, and St. Brendan’s with two during this spell.

Power put in an excellent block on a Siobhan Maloney effort in the 36th minute; with Lorna Barton also well placed to deny EGB’s Scuffil 10 minutes after the break.

EGB broke the scoring dead-lock with a 46th minute Niamh O’Sullivan goal, and cut the gap to five points with a point from half-time substitute Leah Ivory soon-after.

Kilduff brought her match tally to 2-3 with a much required St. Brendan’s point on 51 minutes, but this was her sides only second half score.

EGB pressed hard, but were guilty of some wides, before Niamh O’Sullivan blazed a 58th minute penalty over the cross-bar.

Aoibhinn Burke added a point a minute later to cut the gap to four points, as EGB never gave up.

O’Sullivan had a goal shot stopped on the line in the first minute of injury-time, but time ran out for EGB, as St Brendan’s captain Ann Marie Riney lifted the Cup after the game.