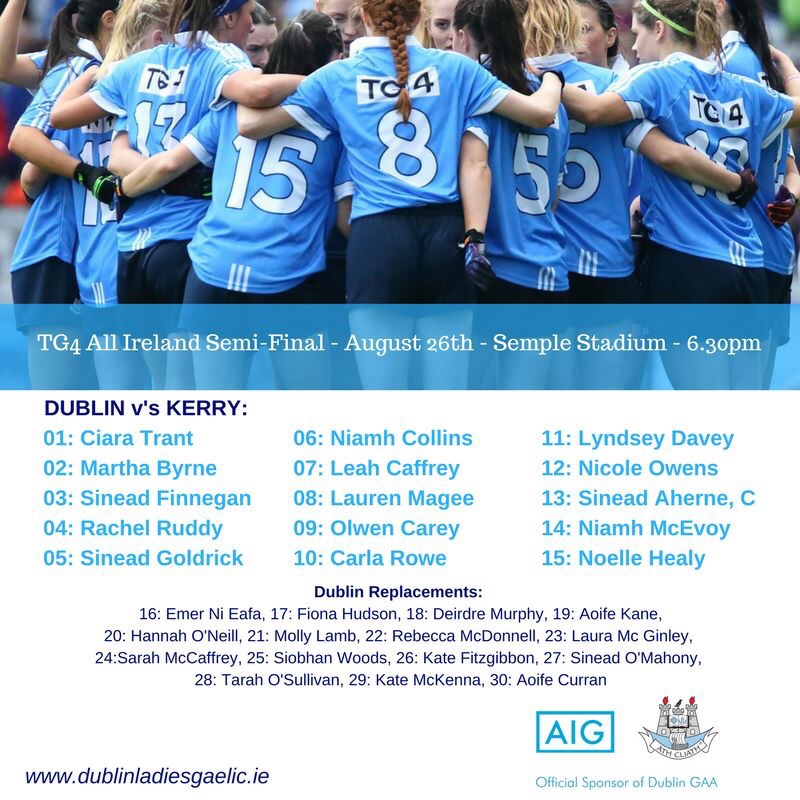 Dublin Boss, Mick Bohan has released his starting line out for this Saturday’s key championship clash with Kerry. There is just the one change to the Dublin starting 15 from that which lined out against Waterford in the quarter final.

Sinead Goldrick returns to the starting line up with Aoife Kane making way for the five times All Star award winner. Goldrick is named at number 5 allowing Olwen Carey to resume her midfield partnership with Lauren Magee with Niamh McEvoy moving to the edge of the square.

Up front Dublin will hope that Nicole Owens and team Captain, Sinead Aherne continue to show the good form they have displayed to date in the championship.

While Niamh McEvoy’s experience will certainly bolster the Dublin full forward line indeed all three St Sylvesters players will have a major role to play for their County on Saturday.

In total 13 of the side that lined out in last Septembers All Ireland final versus Cork will start on Saturday for the Dubs.

Kerry last won the Brendan Martin cup back in 1993 but jointly hold the record for most All Ireland wins (11) with their Munster neighbours and great rivals, Cork.

Kerry were queens of the Gaelic football world through the ‘80’s – early ‘90’s and were crowned senior All Ireland champions on 11 occasions (’79, ’82-’90, ’93). Cork could surpass that number this September having won the title every year from 2005 bar one – 2010, the year Dublin walked up the famous Hogan stand steps.

Dublin will be many pundits favourites to overcome the challenge of Kerry but Dublin Boss, Mick Bohan will be fully aware of the Kerry threat having watched at first hand the Kingdoms impressive performance versus Armagh.

Kerry teenager, Hannah O’Donoghue was in majestic form for the Kerry girls in their quarter-final win scoring 1-04 from play. Her performance earned her the player of the match award.

Kerry will look to experience players such as, Ashlinn Desmond, Aisling Leonard, Emma Sherwood, Louise Ní Mhuircheartaigh, Sarah Houlihan and Lorraine Scanlon to hit top form on Saturday with the aim of reaching the final on September 24th.

Kerry manager, Graham Shine has injected a lot of youth into his panel by introducing no less than 10 of the Kerry minors into his championship squad. Three of whom, O’Donoghue, Fiadhna Tangney and Jadyn Lucey all played a part in the Kingdom’s victory over Armagh.

Match official, Stephen McNulty from Wicklow will get proceedings under way in Thurles tomorrow at 6:30pm. The game is being broadcast LIVE on TG4 the first of the semi-finals is also being shown on Facebook LIVE just click on the TG4 page.

Meath Claim Leinster U16 Championship Title With Win Over Dublin