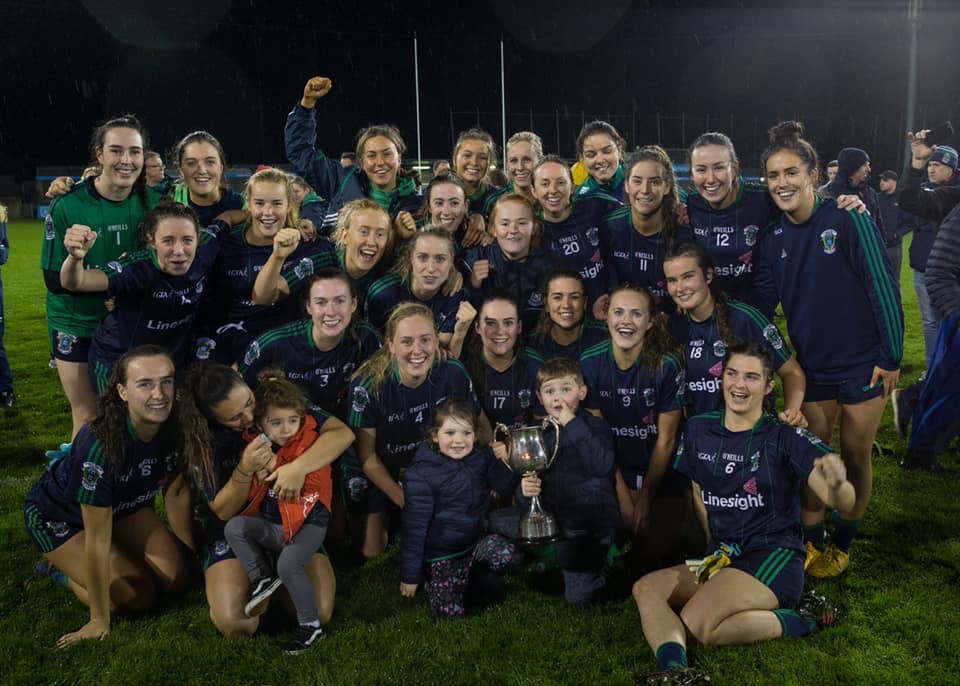 They were pushed all the way by a determined Kilmacud Crokes outfit, but Foxrock Cabinteely claimed a magnificent fifth successive Dublin Senior Club Ladies Football Championship crown in a dramatic decider at Parnell Park.

Extra-time was required before they could be assured of their latest triumph as county star Molly Lamb converted penalties in each half of normal time for Crokes.

The prospect of a draw at the end of 80 minutes loomed large, until Amy Connolly stepped up to the mark with a brace of points to seize the day for Foxrock.

Whilst Foxrock were seeking to extend their rein at the top, their southside rivals were competing in their maiden senior final.

All three players recently earned All-Star nominations for their outstanding displays at the inter-county grade in 2019, while netminder Rachael Fleming was also part of the Jackies squad as they claimed the Brendan Martin Cup for a third consecutive season.

There was also a strong Foxrock presence in the Dublin panel, with Sinead Goldrick, Niamh Collins, Hannah O’Neill and Emma McDonagh all figuring prominently in Mick Bohan’s set-up.

Both teams had to deal with short turnarounds for this showpiece affair, having come through semi-final encounters at Bray Emmet’s last Monday.

Whereas Crokes were convincing winners against St Sylvester’s, Foxrock overcame an early deficit to squeeze past the formidable challenge of Thomas Davis.

Despite the presence of inclement weather, there was a ferocious pace and intensity throughout the proceedings.

After Foxrock inside forward Jodi Egan fired over at a tight-angle, Crokes immediately responded through the influential Michelle Davoren.

It proved to be a pulsating opening to the contest and following a lung-bursting break into the opposition half, Foxrock midfielder Laura Nerney added her name to the scoresheet. Nevertheless, their Stillorgan counterparts were hell-bent on making the most of their first appearance in a top-tier showdown.

At the tail end of a sixth-minute attack, the probing Davoren released Rutledge on goal. The latter is more accustomed to playing in defence at county level, but displayed remarkable composure in firing beyond the reach of Tarpey for the opening goal of the night.

They subsequently extended their lead with a pointed Rutledge free – after Wicklow whistler Stephen McNulty had initially signalled for an advantage.

As expected, Foxrock (who lost to Mourneabbey in an All-Ireland senior final at the same venue last December) eventually found their feet as the action progressed.

The industrious Connolly raised a white flag courtesy of a superb strike at a tight-angle and, having capitalised on excellent approach work from Amy Ring and Aisling Murphy, Egan kicked to an empty net on 18 minutes.

However, the holders suffered a temporary set-back moments later, when Murphy was yellow-carded for a foul on Fleming.

Before they could come to terms with this numerical deficiency, they suffered a fresh blow at the church end of the ground. A foul on Julia Buckley led to a Crokes penalty – which centre-back Lamb dispatched to the net with considerable aplomb.

This threw down the gauntlet to Foxrock, who were briefly reduced to 13 players as a consequence of Connolly’s sin-binning in the 29th-minute. Yet with Crokes posting five wides during the opening period, they kept themselves firmly in contention.

Indeed, courtesy of an earlier Connolly point – and an impressive Claffey effort – Foxrock restored parity in time for the interval (1-5 to 2-2).

Crokes settled on the resumption with another Rutledge free, but the Foxrock challenge kicked into the gear via a devastating purple patch.

When full-forward Amy Ring was picked out in space on the left, she made no mistake with a clinical finish past the stranded Fleming. Ring quickly added a free to her personal tally and Egan was then on hand to stretch Foxrock four points clear.

Crokes were not out of the reckoning just yet, though, and marauding half-back Laura Kane was unfortunate to find the side-netting with a close-range shot.

Davoren and Rutledge (free) continued to fly the flag up front, while Magee was driving her side forward at every available opportunity.

It was at this juncture that Foxrock’s big-game experience started to shine through, however. Either side of the third-quarter mark, Ring and substitute Laurie Ahern found the target in clinical style.

Their patient build-up play was increasingly forcing Crokes on the back-foot and thanks to a Connolly free off her trusty left boot, they moved into a seemingly insurmountable five-point buffer.

Once again, though, Crokes displayed incredible resilience to keep their championship dream alive. A brace of Rutledge frees left just three points between the teams deep into stoppage-time and after consulting with his umpires, McNulty subsequently awarded a second penalty to Kilmacud.

The ice-cool Lamb once again came up with the goods, ensuring that 20 additional minutes would be needed to produce an outcome in this gripping spectacle. Understandably, both teams were quite tentative once the play resumed.

Mia Jennings returned to the fray for a six-minute spell in place of Lauren Magee, who was briefly forced off with a blood injury. In this period, she rounded off an incisive attack with a fine point on the turn.

Ring had previously left the field at the end of normal time, but re-emerged in the nick of time to kick an equalising point. This left the tie delicately poised heading into the closing 10 minutes of a relentless outing.

Though it was nigh-on impossible to predict how the game was going to pan out, Foxrock eventually dug deep to maintain their grip at the top table.

Connolly continued to produce a high work-rate around the middle-third and her two-point salvo off placed-balls created some daylight between the teams.

Crokes fought until the bitter end, but Foxrock had just enough in reserve to ultimately prevail.