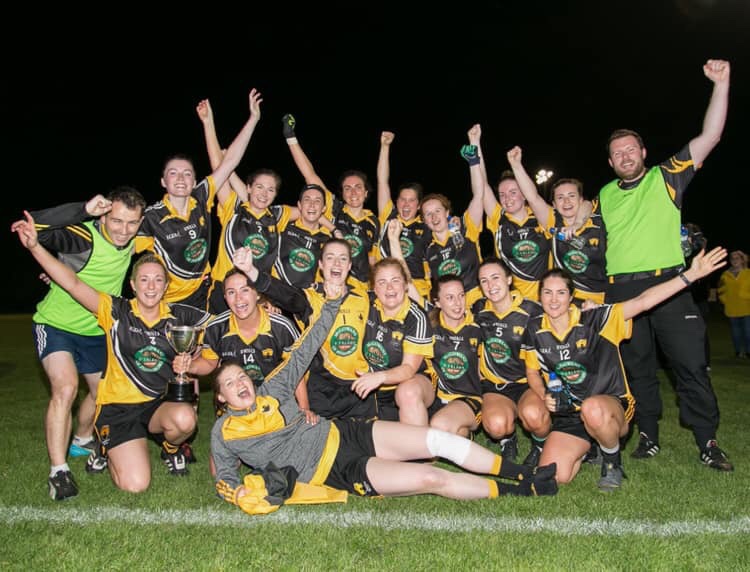 A hat-trick of goals from Christine Dilworth and two from Aisling Newton at a cool and windy Lawless Memorial Park in Swords on Friday evening paved the way for a St Brendans triumph in the Dublin Junior ‘C’ Ladies Football Championship Final.

Their opponents Crumlin battled valiantly till the final whistle and a late yellow card for St Brendans Nicola Carribine signaled a late charge from the O’Toole Park outfit who scored 1-02 in the closing minutes to leave just three scores between the teams at the finish.

St Brendans though were full value for their win, Joan McNulty was excellent in defence for the side from Grangegorman breaking up numerous Crumlin attacks and being the fulcrum for many of Brendans forward forays. Half-back Aoife Watters carried the ball with menace from deep throughout and her hands could be seen over a glut of Brendan’s scores on the night.

Midfielder Faye Kearney had a tremendous battle in the middle of the park with her counterpart from Crumlin Amy Morgan and both players could be very pleased with their performances on the night. Up front the movement and pace of Christine Dilworth, Aisling Newton and Sinead Morrissey caused the Crumlin defence endless problems and that trio of inside forwards accounted for all bar one point of St Brendans total in the final.

Crumlin had their stars on the night as well, centre-back Grainne Smith worked tirelessly throughout, was strong in the tackle and drove out from the back to great effect. Up front Abby Ryan, Elaine Ryan, Catherine O’Brien and Sarah Ryan combined well with some nice passages of link play and crisp close quarter passing.

Both sides met earlier in the competition in the opening game in Group B on the 8th of May in Longmeadows with Crumlin coming out on top on a scoreline of 1-10 to 1-06. St Brendan’s put that opening day setback behind them to finish top of the group. Crumlin suffered a shock one point defeat to Fingallians B but finished level on nine points with St Brendan’s to secure second spot in group and a place in the knockout stages.

The two sides had contrasting wins in their respective semi finals, St Brendans had a comfortable win over Naomh Olaf by 6-14 to 0-04, it was a much tighter affair for Crumlin who battled it out in miserable conditions with Clontarf B to secure a four point win and a place in the final with the full-time score 1-06 to 1-02.

St Brendans got off to a dream start in Friday evenings final, Faye Kearney won the throw-in found Aisling Newton with a neat pass and Newton hit a superb foot pass into Christine Dilworth who coolly slotted the ball to the back of the net.

The Grangegorman outfit suffered a setback in the 5th minute, already depleted numbers wise with only two substitutes on their bench due to a number of squad players missing for various different reasons, they lost midfielder Roisin McDonald to an ankle injury after a heavy collision stopped her rampaging run through the heart of the Crumlin defence. She was replaced by Erin Fadian and Sinead Morrissey converted the subsequent free.

Crumlin got themselves on the scoreboard in the 7th minute with a fine point from Elaine Ryan. But two minutes later Brendans centre-forward Aisling Newton picked the ball up between the 45’ and 21’ metre lines and went on a mazy run through the Crumlin rearguard to slot over an excellent point. Newton doubled her tally moments later when she was picked out in front of the posts with a delightful dinked pass from Sinead Morrissey and the number 14 slotted the ball over the black spot.

With 13 minutes on the clock Brendans got their second goal of the game, Ursula Murphy gathered the ball around the middle and drove towards the Crumlin goal, Dilworth made a quick run into space and Murphy picked her out, the corner-forward turned inside her marker and let fly to ripple the back of the net to give her side an eight point advantage.

Crumlin were struggling to get anything to stick up front and were driven onto the back foot by Brendans ability to transition the ball from one end of the pitch to the other at pace with the clever play of full-back Joan McNulty and the incisive ball carrying of wing-back Aoife Watters at the heart of Brendan’s attacking play.

Ten minutes from the break and St Brendans stretched their lead to nine with a point from Morrissey after a sweeping move the length of the pitch involving Faye Kearney and Aisling Newton. The game got scrappy for the remainder of the half with good defending from both sides spurning scoring opportunities for either team.

The scoreless barren spell was ended by Crumlin’s Sarah Ryan who supplied her sides second point of the half after some great work from Abby Ryan who battled hard to win back the ball after initially losing it.

In first half injury time Aoife Watters after a brilliant run out of defence picked out Faye Kearney running off her shoulder, the tall midfielder kicked a pass into the ever moving Newton who evaded her marker to add another point to her tally.

Just before the whistle Crumlin were awarded a free just beyond the midfield area for a foul on Abby Ryan, Ryan took a quick one to Jill Rogers on the 40’ who pinged a super long ball into Catherine O’Brien who pointed to leave the score at half-time 2-05 to 0-03.

Just after the restart the lights on one of the pylons down the scoreboard end went out throwing an eerie shadow down that end of the pitch. With the guarantee that they would switch back on in a couple of minutes the referee checked with both managers that they were happy to continue until then which they both agreed.

Brendan’s extended their lead in the 35th minute with a point from Sinead Morrissey her third of the game. Crumlin were thrown a lifeline three minutes later when Sarah Ryan was fouled in the square for a penalty after catching a tremendous cross field pass from Elaine Ryan on the wing. Sarah Ryan took the responsibility herself for the spot-kick and hit an unstoppable rocket past Karen O’Connell in the St Brendan’s goal.

It was a short reprieve though as the response from Brendan’s was emphatic, Aisling Newton was fouled about 45’ metres out from the Crumlin goal by Grainne Smith, a long ball in dropped into the hands Christine Dilworth and the diminutive forward turned to her left and arrowed a shot into the right hand corner of the net to complete her hat-trick.

Cathrine O’Brien and Ursula Murphy swapped points as the game headed into the final quarter. Brendan’s suffered a setback when the impressive Aoife Watters was shown a yellow card for a foul on Caoimhe Cooke and had to endure a ten minute spell in the sin-bin.

Unfortunately for Crumlin they missed the resultant free and the side from Grangegorman made a mockery of their numerical disadvantage with ten minutes remaining to score their fourth goal of the final.

Ursula Murphy stripped the ball from Niamh Fitzsimons in the Crumlin half of the field, passed the ball into Aisling Newton, the number 14 took off towards goal and unleashed a shot with the outside of her foot which dipped just over the grasp of Crumlin net-minder Mel Moore into the top left hand corner of the net.

Crumlin pulled a point back with a converted free from substitute Bernice McNally with nine minutes remaining. The restart was kicked out to the centre of the park and collected by Joan McNulty, she passed inside to Newton who played a quick one-two with Morrissey and blasted the ball to net for her second and Brendan’s fifth goal of the game.

Crumlin to their credit didn’t let the heads drop and drove forward they were awarded a free with four minutes remaining which resulted in a yellow card for Nicola Carribine, the free was played short to McNally who slotted it over the bar. McNally added another point in the 58th minute as Crumlin made the extra player count and poured forward.

In the final minute their pressure and adventure was rewarded with their second goal of an absorbing contest. Crumlin were awarded a free just past midfield, Sarah Ryan played the ball to Abby Ryan who in turn picked out half-time substitute Sharon Lynch who found the bottom left hand corner of the net. That was to be the final score of the final and St Brendan’s deservedly claimed the Dublin Junior ‘C’ championship title.