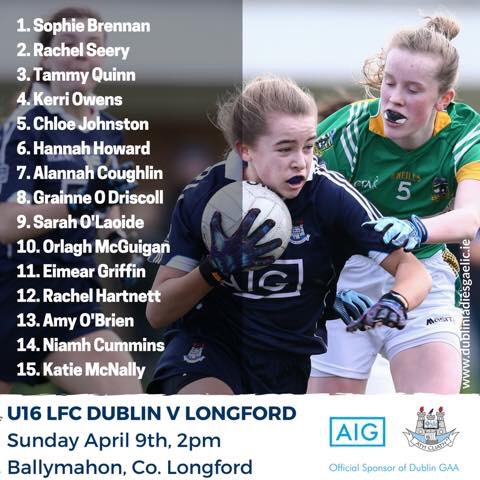 The Dublin U16 Ladies Football team to play Longford in Ballymahon at 2pm in the third round of the Leinster Championship has been announced.

Dublin head into the game with a perfect record of two wins from two games with comprehensive victories over Meath in the first round by 3-17 to 1-11.

In round two the young Dubs traveled to Laois and handed their host a 4-11 to 2-07 defeat.

Longford’s record to date is the complete opposite to the girls in blue as they have suffered two heavy defeats in the opening two rounds.

In round one they hosted Laois who beat them by nine points in a 0-19 to 1-09 defeat. Their opponents in round two were Meath and the margin of defeat for Longford that day was 24 points with the final scoreline 4-16 to 0-04.

Taking that into account Dublin will head into today’s game as favourites to claim the win and finish the group stages with a perfect record.