Meath aided by a strong wind at their backs began the match well and were showing no sign of nerves as they took the game to Dublin.

Their spirited play was rewarded in the 8th minute of the first half when corner forward Tara Berigan was on target for the games opening goal. Meath lead the game by 1-01 to 0-01.

Dublin responded with a Kate Sullivan free which was soon followed by a well-taken goal from St Maurs, Laura Carthy.

By the 15th minute, Dublin had found their composure and were now leading the game and would continue to do so up until the final whistle.

At the interval, seven points separated the two sides, with the halftime score Dublin 1-09 and Meath 1-02.

On the resumption, it was once again the Royal County who settled quickly with a Berigan point. Dublin followed this Meath score with two points of their own, a Sarah Fagan (free) and a well taken point from Laura Carthy.

The decisive score of the second half came in the 45th minute when Dublin full forward Caoimhe O’Connor finished a well worked Dublin move with a rasping shot to the back of the Meath net.

With 11 points separating the two sides Meath to their credit continued to battle away and were rewarded for their endeavours with a penalty in the 55th minute which was duly dispatched expertly by Lauryn Grier.

The penalty was a mere consolation score for Meath as Dublin held on to claim their 8th Leinster minor title in a row.

Dublin can now look forward to an All Ireland semi-final with the winners of the Munster championship on June 30th.

Player Of The Match: 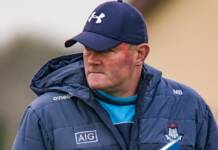