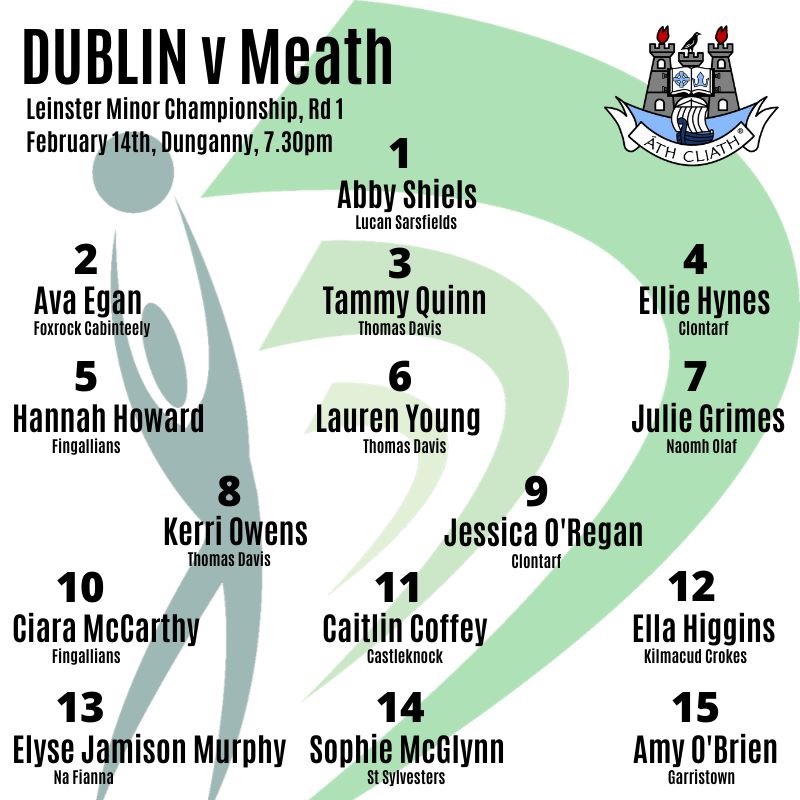 Dublin minor manager Anthony Cooke has announced his starting 15 for the the highly anticipated game which starts at 7.30pm.

Meath are the reigning Leinster minor champions and are fancied to do well again this year in the competition. Dublin will be hoping to put a spanner in the works on Friday evening and secure what would be a vital win.

For eight years Dublin reigned supreme over the Leinster minor landscape, but that run was broken last season when they failed to reach the provincial decider and Meath took over the mantle beating Kildare in the final by 3-13 to 3-11.

The girls from the Royal county though had their dreams of reaching the Minor A All Ireland final dashed as they succumbed to Ulster champions Monaghan by on a scoreline of 3-16 to 3-12.

A testament to how strong the game is in the capital is the amount of clubs represented on the Dublin minor panel with players from no fewer than 20 clubs named n the squad.

Tammy Quinn from Thomas Davis will captain the side and the Tallaght club – last season senior club championship semi-finalists are well represented on the Dublin panel with Lauren Young and Kerri Owens named in the starting 15 and Caithlin Staunton Douch among the replacements.

Due to the recent inclement weather and the predicted further poor spell of wet and windy weather from Storm Dennis approaching Ireland the venue for the game was switched this morning from Dunshaughlin GAA club to the 3G pitch in the Meath centre of excellence in Dunganny.

Tomorrow evenings game is officiated by Paul Burke from Louth and he will get the latest chapter of this fierce rivalry between near neighbours Dublin and Meath underway at 7.30pm