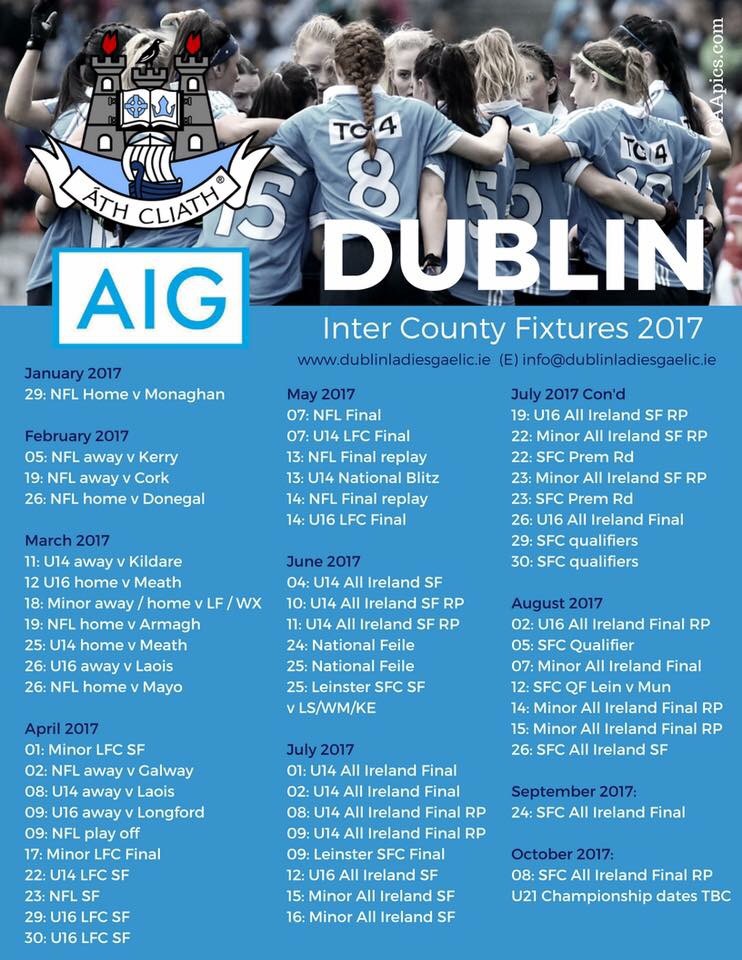 This Sunday the 2017 competitive season begins for Dublin’s Ladies Football squads with the Senior squad welcoming Monaghan to the capital for the start of the Lidl National Football League. The game takes place in Naomh Mearnog’s GAA Club with the game throwing in at 2pm.

Sunday’s game will start a very busy calendar of action for Dublin’s Ladies Footballers from the U14 grade right up to Senior and all the fixtures are listed in the image below.

All the games are equally important and hopefully the Dublin fans will get out and support all the teams as much as possible, but there are a number of dates to pencil into the diary.

On March the 11th the U14’s get their Leinster Championship Campaign up and running with an away trip to face Kildare, the U14 LFC semi finals take place on the 22nd of April with the Final down for the 7th of May. If Dublin win the Leinster title the All Ireland semi-finals are the 4th of June and the Final is the weekend of the 1st and 2nd of July.

Reigning Leinster Minor Champions Dublin get their 2017 campaign going on the 18th of March. The Leinster championship semi-final takes place on the 1st of April and the Final is the 17th of April. If Dublin retain the Leinster title then they will play their All Ireland semi-final on the 15th/16th of July. If the Dublin Minors reach the All Ireland Final as they did last season that game will be played on the 7th of August.

The U21 championship fixtures are still to be announced, the competition normally takes place in May, but this year it has strangely considering the Club Championships will be in full swing been moved to October. We will post the fixtures as soon as the LGFA release them, Dublin are the defending champions and will be looking to win their fourth All Ireland title in a row in 2017.

Finally we come to the senior fixtures as stated above Mick Bohan’s squad get their National Football League campaign up an running next Sunday the 29th of January. The League playoffs are down for the 9th of April, the semi-finals take place on the 23rd of April and the Final is the 7th of May.

Leinster Champions Dublin will go in search of their sixth title in a row later in the year and their semi-final game is the 25th of June, the Leinster Final is penciled in for the 9th of July.

The All Ireland series starts with the Preliminary round on the weekend of the 22nd and 23rd of July and the Qualifiers take place the following weekend the 29th/30th of July. The All Ireland quarter final is on the 12th of August, the semi-finals will be played on the 26th of August and if Dublin make the All Ireland Final for the fourth year in a row then they can look forward to a trip to Croke Park on the 24th of September.

So plenty of action for Dublin supporters to look forward to over the next eight month’s and hopefully it’s another trophy laden season for all the Dublin Ladies Football Squads.