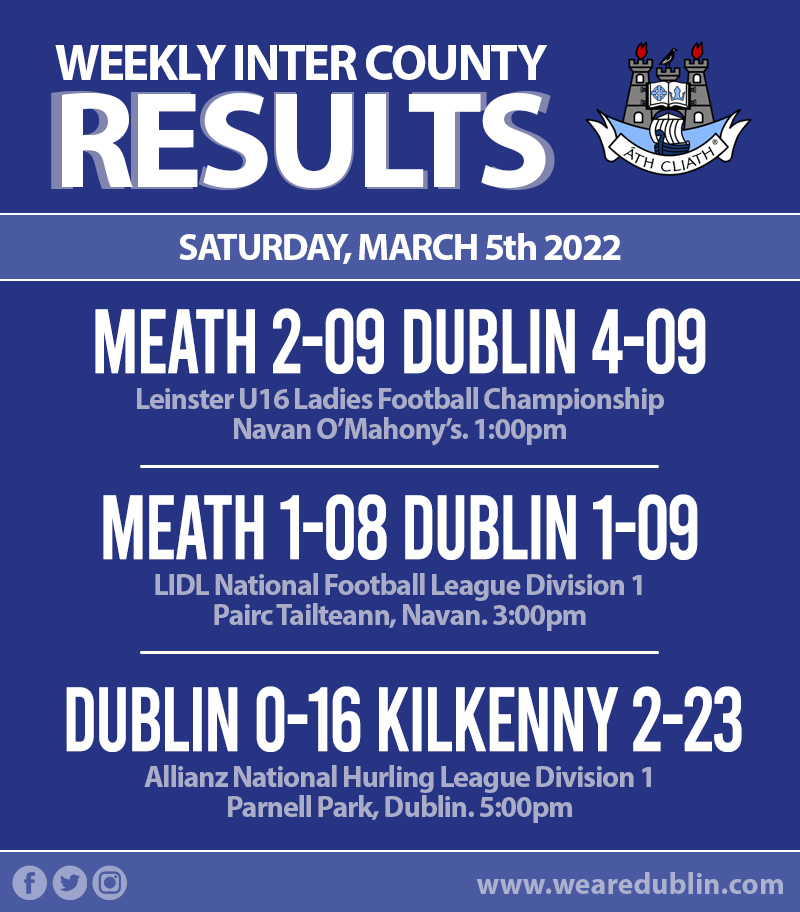 Three first half goals saw Dublin’s U16 Ladies Football Panel on the front foot at the beginning of this year’s Leinster Championship. And they saw out the game as victors despite conceding two second half goals to Meath. The 4-09 to 2-09 final sets Dublin up nicely in the Round Robin phase of the competition.

Dublin will entertain Laois on March 19th before travelling to Kildare at the beginning of April. From there the competition reaches the knock out stages with the Semi Finals on April 23rd and the Leinster decider down for May 7th.

Mick Bohan’s senior football panel made it three for three in the defence of their Lidl National Football League crown. And it was a last gasp free from Hannah Tyrell that pushed Dublin over the line in a pulsating game over rivals Meath. It was the first time these two sides squared off since Meath dethroned Dublin as All Ireland Champions last year.

There were no holds barred in this contest despite both sides already assured of knock out slots in the competition. The teams were level on five occasions. And after Dublin took a 0-06 to 0-05 lead into the break, Tyrell’s goal and late free secured victory for Dublin.

The girls in blue were dealt a huge blow when Ellen Gribben was sent-off on a straight red card. Nicole Owens and Vicki Wall were shown yellow cards late on. And both teams had their chances but it was Tyrrell’s free that ensured Dublin won it.

A third quarter drive, including goals from Walter Walsh and Martin Keoghan drove a strong Kilkenny side to victory in Parnell Park this evening. And what turned out to be a repeat of last year’s Leinster Hurling Final, Kilkenny lead from throw in to final whistle, consigning Dublin to their first loss of the 2022 season.

The Dubs today were no comparison to the Dublin side that came away from Semple Stadium last weekend with a win. And after seven games without defeat, including a winning run in the Walsh Cup, Dublin’s unbeaten record is finally over.

At 0-11 to 0-05 down before the restart, Mattie Kenny’s side did show signs of a comeback reducing the defecit to 0-03. But Walsh’s goal cancelled out Dublin’s hard work. And it began an unbreakable Kilkenny run of scores including a 50th goal from Keoghan to push the tie out of reach.