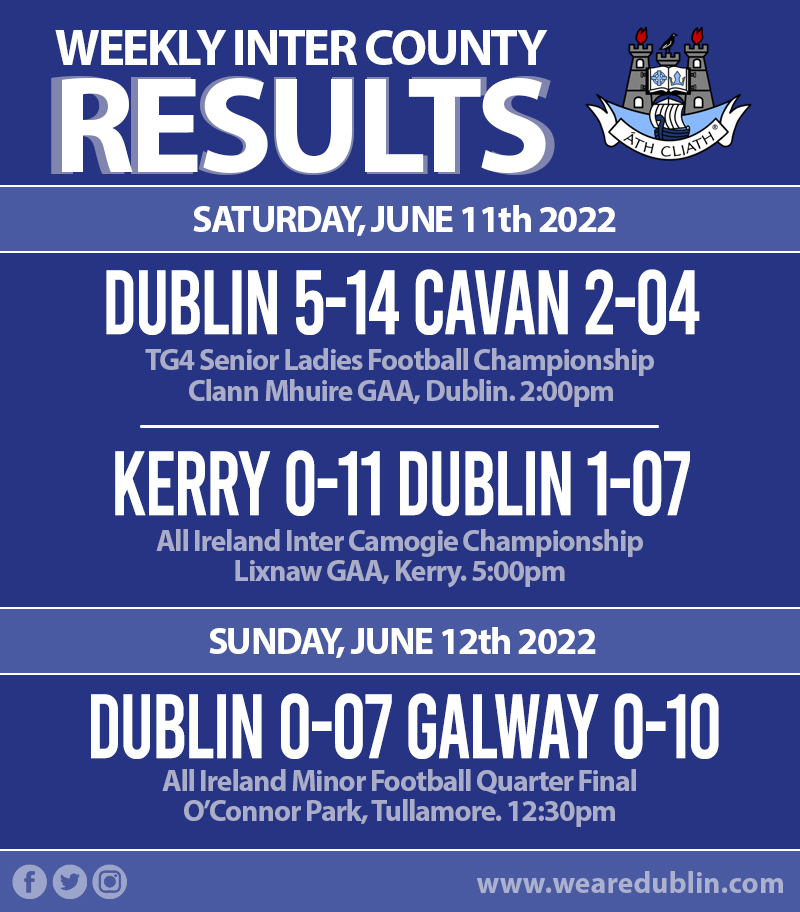 We move through the gears in all of this year’s All Ireland Championship competitions. And we’ve been treated to three Inter County games between yesterday and today. So here’s all the details on the three results.

Clann Mhuire’s own Carla Rowe made a resounding return to the Dublin ranks yesterday scoring 2-03 and guiding Dublin to an opening round victory over Cavan. She was joined on the scoresheet with 2 goals from substitute Nicole Owens and veteran Sinead Aherne giving Mick Bohan’s side a comfortable 5-14 to 2-04 win.

Against a strong wind Dublin eased to a 2-06 to 0-03 half time score as Cvan failed to capitalise on the weather advantage. Bohan’s side continued to boss proceedings on the restart. And despite a well taken Aisling Gilsenan goal and a converted penalty from Lauren McVeety the result was never in doubt.

A trip to Tipperary next weekend for Dublin and a win will secure their knockout position before meeting Mayo in the final round.

A second defeat making it only 1 win from 3 for Jimmy Greville’s Inter Camogie Panel. And it certainly would have made that long road trip to Lixnaw GAA in Kerry and back even longer.

Despite the Dub’s put in a solid shift they were trailing by 0-06 to 0-04 at half time. And they came close thanks to an Aoibhe Dillon goal in the second half but it just wasn’t enough as Kerry hung on for a 1 point victory.

It leaves Dublin on 3 points in the Group 1 table with 2 home games remaining. They’ll face Galway at home next week before welcoming Carlow to Dublin for their final game.

Its the end of the road for Dave Reynolds and the Dublin Minor Football panel as Galway ended their All Ireland Campaign on a 0-07 to 0-10 scoreline. Galway advance to the Semi Finals of the competition and will now face Derry at the emd of the month.

Dublin can have very few complaints about this defeat. They played second fiddle to the Galway for long spells, particularly in the middle third of the field. Galway created four good goal chances over the course of the hour, while Dublin never got those chances to test Kyle Gilmore between the Galway posts.

The Dubs registered the first four points in the game and looked to be in complete control, but Galway soon settled and from there they continually drove at the Dubs converting enough scores to pull ahead by 0-05 to 0-04 at the break.

Outscoring Dublin by 0-05 to 0-03 on the restart was enough for Galway to secure the win, but it’s disappointment for Dublin and an end to their season.

And that’s the Inter County results wrapped up for another week. Stay with us throughout the week folks, as we’ll bring you more news on all the upcoming games and more.