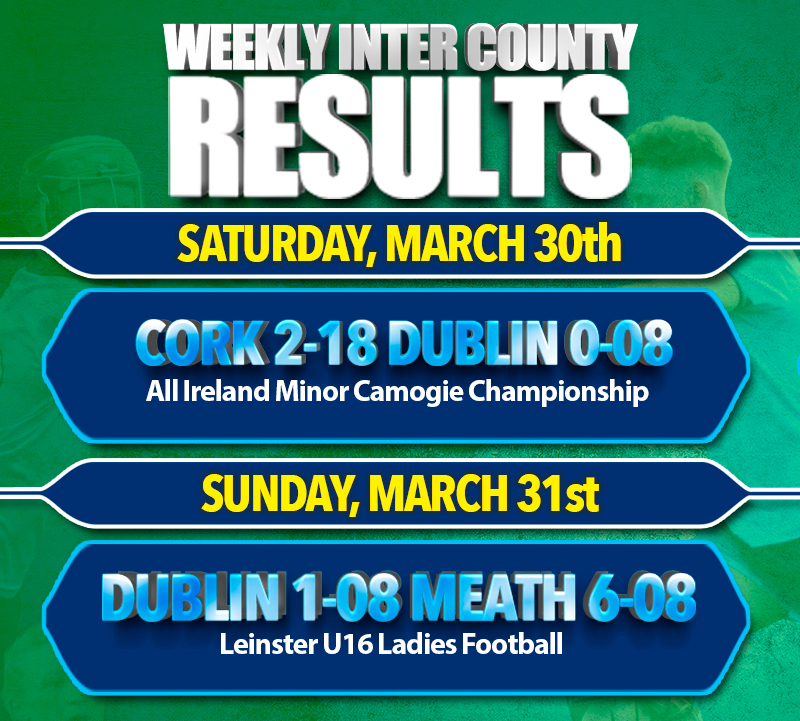 We’ve come to the end of March and a lot of competitions have come to an end. The Allianz League Finals have all been completed and it was strange feeling having no Dublin team in a final. But nonetheless that’s sport. Congratulations to Limerick and Mayo winning the Division 1 Hurling and Football titles.

But we had two inter county teams involved in Championship action this weekend so let’s give you all the details. Unfortunately it wasn’t great news in either game.

Willie Braine’s Minor Camogie Panel went south yesterday in search of a win in the All Ireland Championship and toppling Cork was the goal. Unfortunately for Dublin, they came up short again, suffering their third straight defeat.

The Dubs had shown great promise in their opening fixture against Wexford in Parnells at the end of February. But they came straight back to earth two weeks later with a tough defeat against Tipperary in the Ragg. Tipperary, who have gone onto topping the Group 2 table with four straight wins, put in a huge first half performance, that Dublin couldn’t recover from. And last week Galway came to Dublin to serve the girls their second defeat.

Cork’s win yesterday against Dublin puts them still in the hunt for the second slot, with Galway still to play two games. Commiserations to Dublin. They’ll be back later in the year to contest the Leinster Championship.

Meath hit six goals past Dublin today to win this Leinster U16 Championship clash played in Blanchardstown. A dominant first half from the girls from the Royal County which included five goals set them on their way to victory. Dublin were certainly the better side in the second half, but the twenty point deficit they faced after the opening thirty minutes proved too big a gap to close.

From the throw-in Meath went straight on the attack. Their pace and direct running cut the Dublin defence open time after time. And left a massive mountain for the girls in blue to climb at the break on a score of 5-07 to 0-02.

Dublin came out in the second half determined to try and get back into the game. And to their credit scored 1-05 without reply in the final third of the game. This included a penalty scored by Katie O’Sullivan. But sadly Dublin couldn’t get the finishes this afternoon to get close to closing the gap, with Meath in a comfortable position to see the game outs.

And that’t this weekend covered. Stay tune next week to www.wearedublin.com for news and updates on more upcoming games.

DUBLIN QUALIFY FOR ALL IRELAND QUARTER FINALS DESPITE LOSS TO KILKENNY

SEMI FINAL DEFEAT ONLY THE START OF THE JOURNEY FOR DUBLIN