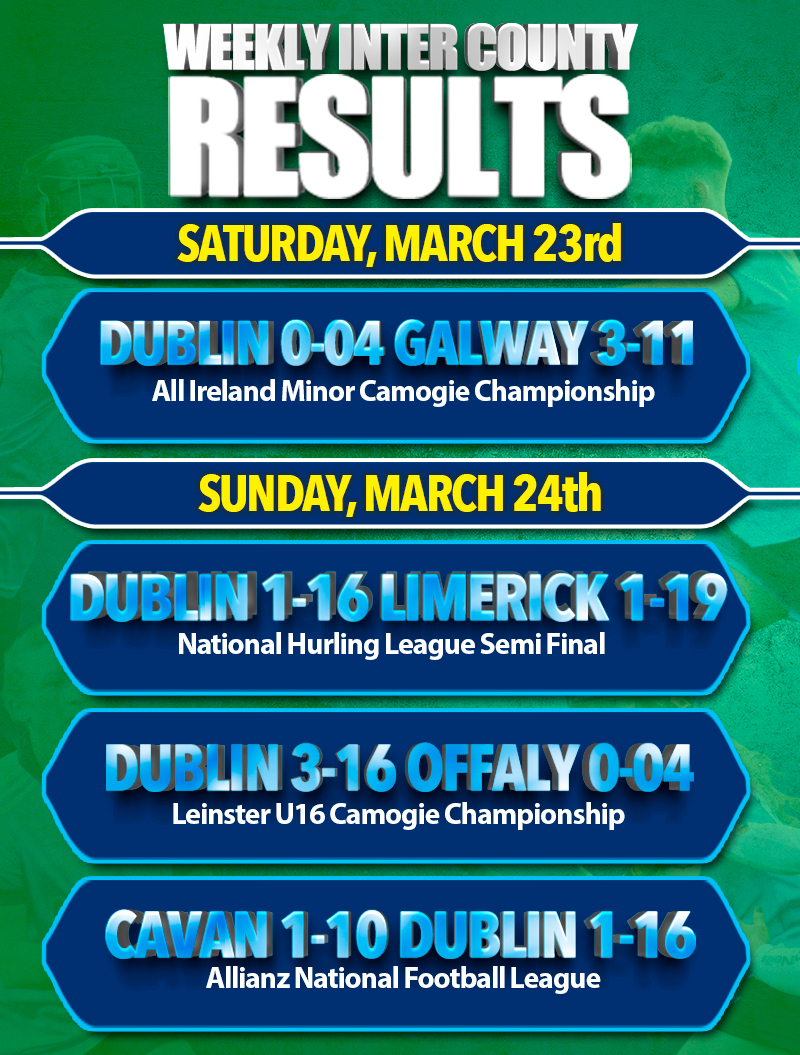 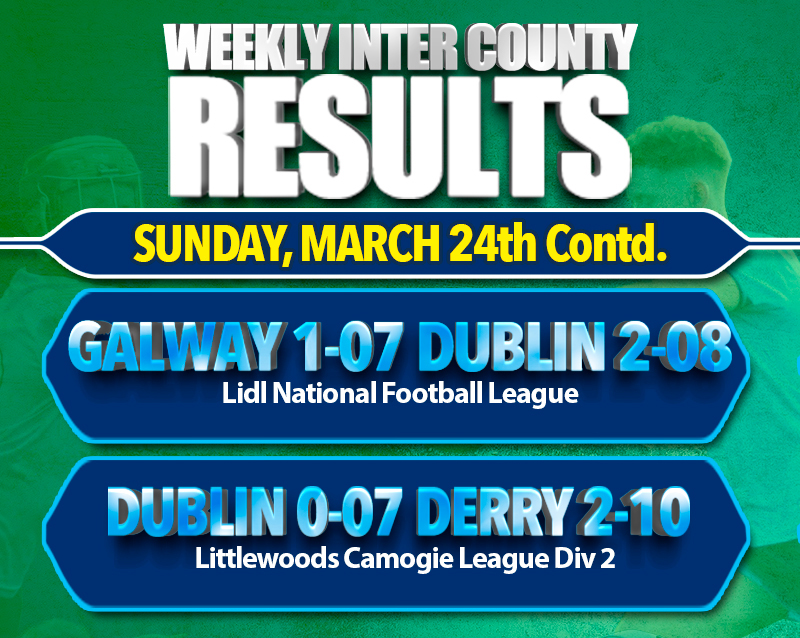 Well we’ve come the the end of another busy week. And all in all it hasn’t been too bad. A few defeats to soak in, but also some big results from our Inter County teams. Wins for the Senior Footballers, Senior Ladies Footballers, and U16 Camogie panel today. Defeats for the Senior Hurlers, Minor Camogie and Intermediate Camogie teams to balance it out. Here’s all the details.

Dublin’s minor camogie squad had no answers to stem a free scoring and classy Galway minor team this afternoon in Parnells GAA club in Coolock.

The Galway minors centre forward Niamh McPeake proved to hot to handle and helped herself to a hat-trick of goals two in the first half and one in the second to steer her side to victory.

Galway’s backline were particularly strong and clear cut chances were at a premium for Dublin throughout the game. The girls in blue got very few looks at the Galway goal and even when they did there was always a Galway player to get in a hook or block or flick the ball away.

A defeat for Dublin this afternoon in the Allianz Hurling League Semi Final, but nothing to be disappointed about for Mattie Kenny in his first year in charge. The former Cuala manager has already improved on last year’s campaign under Pat Gilroy. And today will have given the boss a very good sense of where the Dubs are ahead of this year provincial championships.

The game was pretty much a stalemate for a long time, with Dublin only trailing the All Ireland Champions by one score at the break. But around the 52nd minute, Limerick upped the tempo to run 1-05 unanswered, which Dublin never fully recovered from.

A better start to this year’s Leinster U16 Camogie Championship you just couldn’t have. Dublin were worth the ticket price this afternoon against Offaly, and then some. Holding their opponents scoreless in the first half Dublin registered 2-08 with ease, the green flags raised by Eile O’Ceallaigh and Ellie Young. Young was the top scorer today on 1-05 with Ashling O’Neill bagging 0-05. Throughout O’Neill was tremendous in attack, showing skill well beyond her years.

Substitute Emma Diamond got Dublin’s third goal in the second half, only making the defeat for Offaly harder to take. Ashling Gannon was a dominant figure through around the whole pitch this afternoon, getting 0-03 of her own.

Dublin’s Senior footballers once again recoiled from defeat to capture a win over Cavan in the final round of this year’s Allianz League Division 1 Campaign. Never really threatened, Jim Gavin’s men did enough this afternoon in Breffni Park to confirm Cavan’s exit from Division 1. Although with other results today, it wouldn’t have mattered had Cavan managed to pull off a win over the All Ireland Champions.

Dean Rock was Dublin’s most prolific forward in today’s contest, registering 0-09 of Dublin’s 1-16 tally. Paul Mannion’s second half goal all but won Dublin the game. But Martin Reilly gave Cavan a fighting chance with 1-01 to his personal tally today.

The only unbeaten record in the Lidl NFL Division 1 was ended in Moycullen as goals from Sinead Aherne and Siobhan Woods gave Dublin the points against Connacht champions Galway.

Tim Rabbitte’s Galway were already sure of their spot in the semi-finals ahead of this game, but they have now been joined there by Donegal, Cork and Dublin, who ground out the win in west Galway.

Dublin got off to a great start when Aherne palmed to the net after eight minutes, but Galway replied through Barbara Hannon to only trail by one at half-time. But with Aherne and Nicole Owens in point scoring form, the closest Galway could get was one point as Mick Bohan’s side finished strongly to claim the honours.

Dublin’s Division 2 Group 3 campaign finished with another defeat this afternoon. The girls in blue certainly put in a better second half performance, but Derry, who finished the group unbeaten, were a different class.

A very low scoring first half saw Mary Hegarty find goal for Derry, and Dublin found it hard to come back from there. A second goal eight minutes into the second half all but won the game for the girls from the North. But windy conditions again kept scoring low. In the end Dublin tried hard to dig deep, but didn’t have the finish. Aoibhe Dillon and Sinead Wylde stood out for Dublin today. But the girls no face a relegation competition to save their Division 2 status.