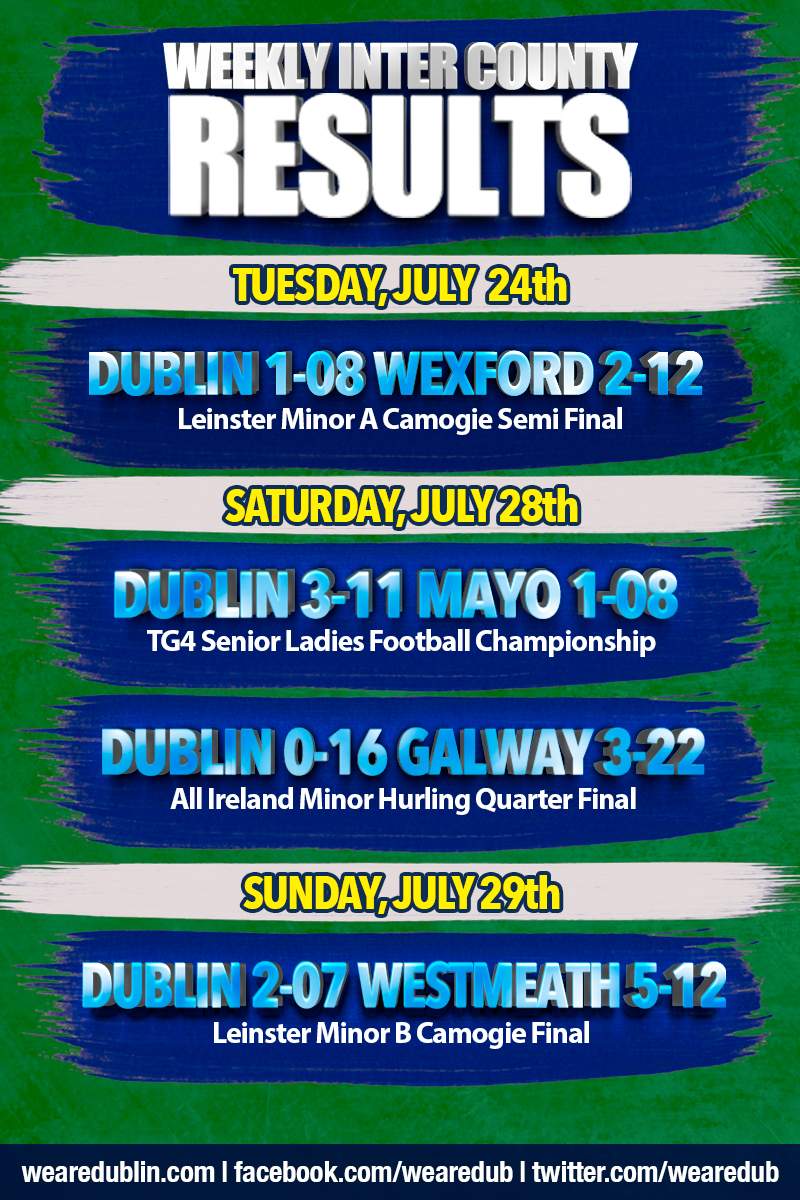 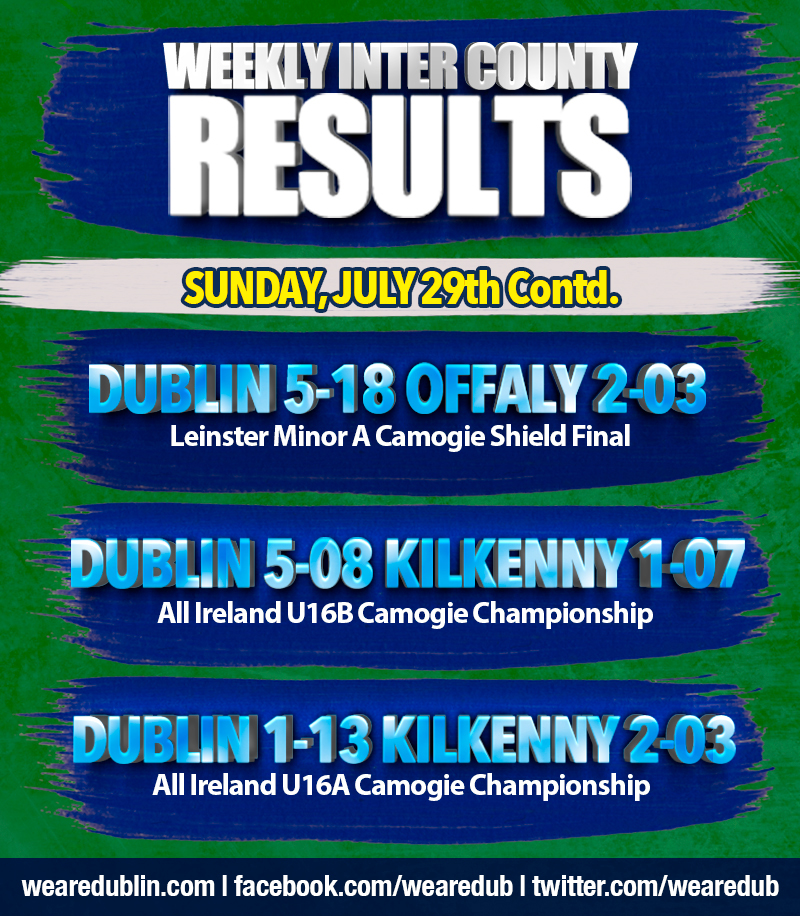 We’ve all the Dublin Inter County Results right here for you to catch up on.

A bit of rain never did any of us any harm right? Of course. And with plenty of showers over the weekend, we still managed to get out and see a few of the Inter County panels in action, as did a lot of you. But let’s dive right in and catch up on all this week’s Inter County Results.

Three Minor Camogie games this week in the Leinster competitions. On Tuesday evening Dublin’s A Panel were in action in Parnells GAA club against a fighting Wexford side in the Championship Semi Final. Wexford to their credit rose to the occasion and dealt a blow to Dublin’s chance of reaching the Final. The girls from the South East were victorious on a score of 2-12 to 1-08 booking their slot in the Final, and sending Dublin into the Shield competition against Offaly.

Every cloud has a silver lining as this afternoon, the A panel travelled to St. Rynagh’s GAA Club and won the Shield Final convincingly, beating Offaly 5-18 to 2-03

For the Minor B panel their Championship Final didn’t go as they would have hoped. losing out to Westmeath by 5-12 to 2-07. A disappointing end for the girls as they’d done so well beating Kildare and Kilkenny in the competition.

Another victory for Mick Bohan’s side over rivals Mayo yesterday in Dr. Hyde Park in Roscommon. Heavy showers got the game underway but nothing could stop Dublin from clinically finishing their Round 3 qualifier. Noelle Healy and Nicole Owens both found the net in a tough battle between last year’s All Ireland finalists, meaning Dublin win their qualifying group setting up a Quarter Final clash with Kerry.

It just wasn’t to be this year for Mike Connolly’s Minor Hurlers as they came up against a very polished Galway side yesterday in Croke Park in the All Ireland Semi Final. The boys in blue managed to stay the pace for the first half, trailing by only a goal, but the young Tribesmen pulled the Dubs apart on the restart, winning 3-22 to 0-16 to advance to this year’s All Ireland Final.

Two brilliant Camogie games this afternoon in O’Toole Park, and both of Dublin’s U16 Panels have made it out of the group phase of the competition and into the knock outs.

The U16B panel got the action started today, and had a comfortable enough session against Kilkenny, registering five goals, to finish on a score of 5-08 to 1-07. The girls were on double scores by half time leading 4-04 to 1-04. They closed up shop after the half time break, holding Kilkenny to only 0-03. Adding another 1-04 themselves saw the Dubs finish strong, level on points with Cork, only losing out on the top spot on score difference.

For the U16A panel, they put in an absolutely fantastic performance against Kilkenny, and ran out 1-13 to 2-03 winners. This game was a fantastic exhibition of skill and speed from both sides, but Dublin proved the more dominant, particularly in the second half. And despite Kilkenny getting within 0-02 of the Dubs, there was no let up and a Phoebe Shannon goal put enough daylight between the sides for Dublin to finish victorious.

And there you have it. We’ll be back tomorrow to bring you details of next week’s fixtures, including of course the last game in the Super 8’s for the Dublin senior footballers.

Historic Day For Faughs Who Claim Senior 2 Title In Abbotstown