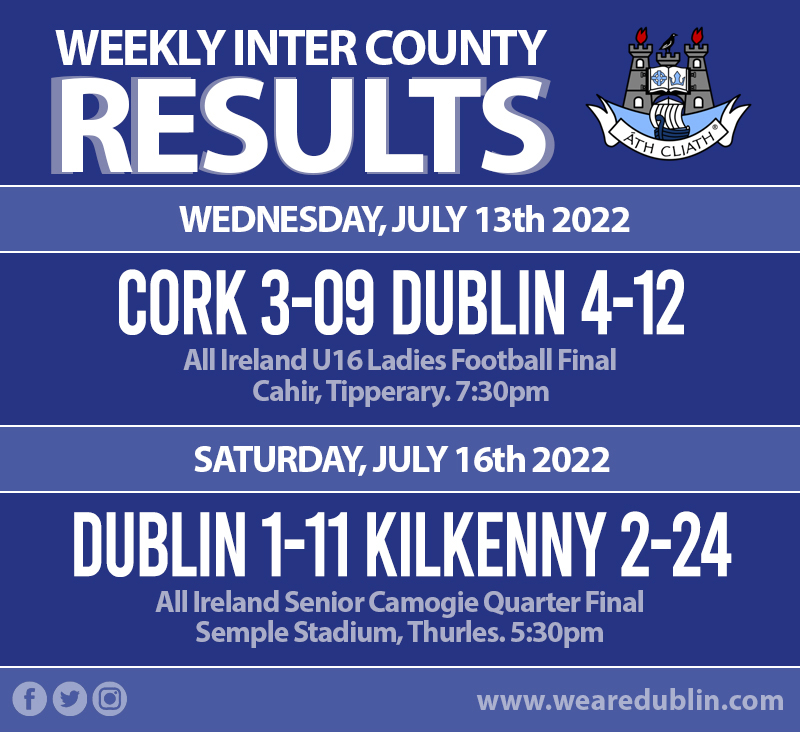 It’s quite hard to believe that it’s only Mid July and we’re saying goodbye to the Inter County Season for Dublin teams. But nevertheless that’s just how it is and from next week our attention will turn to the various Club Championships. But we have the last of the results to bring you, bringing the curtain down on the 2022 season.

It took extra time but Dublin’s U16 Ladies Football panel captured their first All Ireland Championship Crown since 2010. Ellen Joyce, Lucy Ahern, Izzy Dowling and Liadan Murphy all netted goals to see Dublin finally break away from Cork in a very tight contest.

Tied at 2-01 to 1-04 at Half Time Cork took the advantage on the restart with scores from Brianna Smith, Amy Sheppard and Aoibhinn O’Neill.

With 3 minutes remaining, Dowling’s goal looked to have sealed the tie for Dublin, but a penalty shout for Cork saw Aoibhe Daly slot her opportunity into the net to goal for Cork. And points shared brough the game to 3-05 to 2-08 at full time.

Dublin were four scores clear early into extra time, but Cork refused to go down without a fight. With a four point advatage at the small break Dublin would push on despite another late penalty conversion by Cork, and capture the All Ireland title.

Despite their fighting spirit yesterday in Thurles, Dublin’s Senior Camogie panel fell once more to a polished Kilkenny side, seeing an end to their All Ireland campaign. But Dublin manager Adrian O’Sullivan will have seen glimpses of solid stick work to build on going forward.

Dublin raced into an early lead after Kilkenny registered the first two scores. Two Aisling Maher frees had nullified the brace Denise Gaule had converted. And it was Aisling O’Neill who levelled again after Miriam Walsh put Kilkenny in front. Maher pushed Dublin in front again before Niamh Gannon was played on by Emma Flanagan to send the ball confidently into the Kilkenny net.

But Kilkenny’s work rate slowly built to a crescendo, and despaite Dublin battling well into the second half there was only ever going to be one winner of this tie. Relying heavily on forced frees, Kilkenny will have been content relying on the sharpness of Gaule from dead ball situations, including a calmly converted penalty. Miriam Walsh put in a player of the match performance scoring Kilkenny second goal 9 minutes after the half time break.

It was all Kilkenny from there as their firepower was too much for O’Sullivan’s panel to contain. It will be back to the drawing board for Dublin, content with some classy performances and results across the campaign.

Well folks that’s the final bulletin on Inter County results for the 2022 season. We’ve had some great games to take in this year, especially being the first year back to some kind of normality after 2 years of watching from the wings. As mentioned we’ll be keeping a close eye on the clun championships over the coming months, starting with the Dublin Senior Hurling Championship this Tuesday. So stay tuned.