This weekend’s Inter County Fixtures are all confirmed 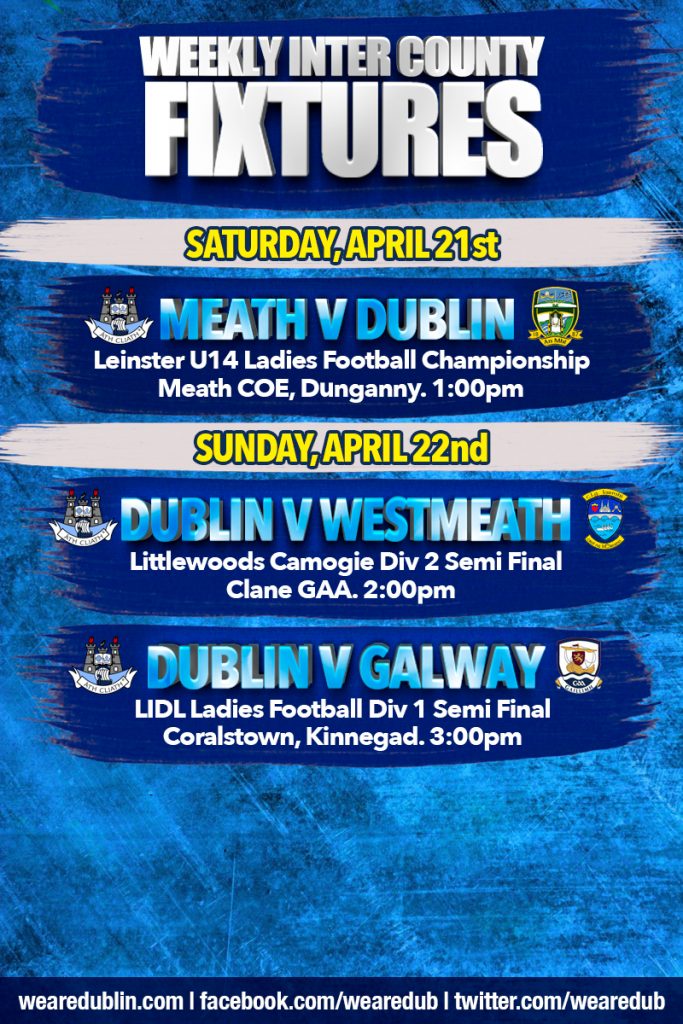 Some massively important games this weekend as the focus stays with Ladies Football and Camogie. And two league semi finals to enjoy.

On Saturday, Dublin’s U14 Ladies Football panel will travel to Dunganny, to face Meath in the last round of this year’s Leinster Championship. The girls in blue beat Kildare, and were then beaten by Longford, so they will be looking for a win this weekend to get back on track. Throw in tome on Saturday is 1:00pm

Sunday is a massive day for both Ladies Football and Camogie as Dublin have teams in Semi Final action.

Starting at 2:00pm Dublin’s Premier Junior Camogie Panel will travel to Clane to face Westmeath in this year’s Littlewoods Ireland National Camogie League Division 2last four game. Dublin clinched the Division 3 title only twelve months ago, so it’s an amazing achievement for the girls to be in the semi finals in their first year in the division. Westmeath, like Dublin, were unbeaten in the group phase and will prove a tough test for Dublin this weekend. Can the girls in blue reach their first Division 2 Final?

Attention then turns to Kinnegad, as Mick Bohan’s Dublin Senior Ladies Football panel take on Galway in the Lidl Ladies NFL Division 1 Semi Final. After seven Round games, Dublin topped Division 1, only being beaten once in the campaign, and it was by their opponents this weekend. Galway stunned Dublin at the end of March, winning by 0-02, so who know what kind of contest this Sunday will be. Throw in at Coralstown GAA is 3:00pm

So there you have it, three games over two days, all as important as each other. Let’s show our support.