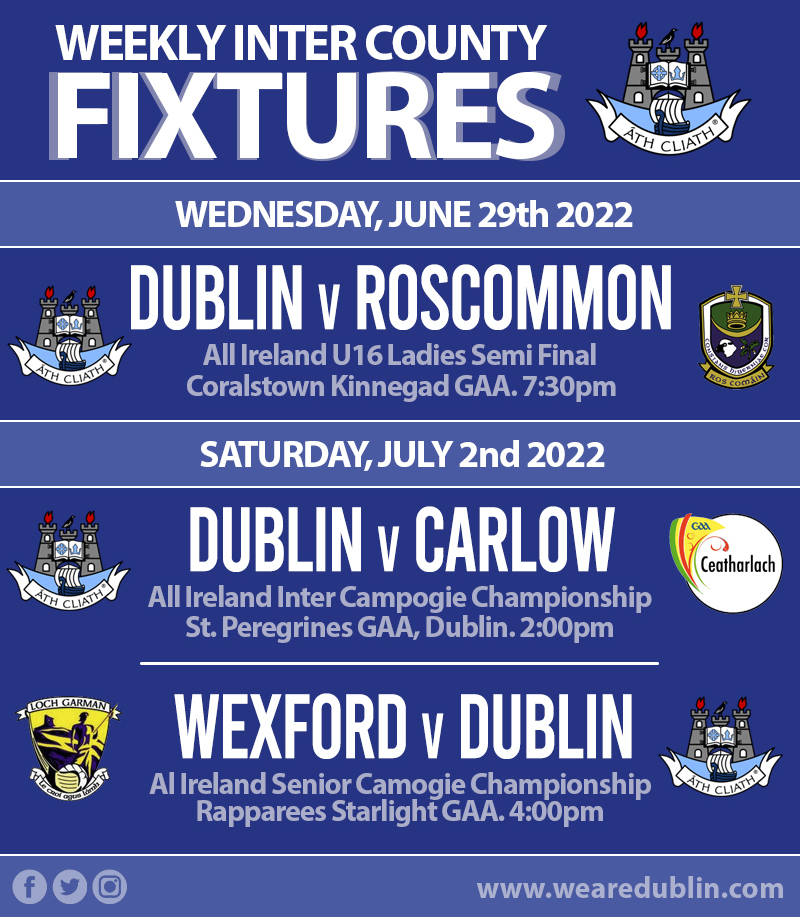 We had a bumper weekend with some great resuits and hopefully we can continue that run this week. There’s some Ladies Football action tomorrow, then on Saturday we’ve got the last two Round Robin games in both our All Ireland Adult Camogie Competitions. So let’s not waste any time.

Dublin U16 manager Fintan Keeling will lead his Leinster Championship winning side into an All Ireland Semi Final tomorrow night in Kinnegad. And hopefully the young Dubs can finish off their season with an All Ireland.

Eight weeks ago Dublin saw off the challenge of Meath in 3-09 to 2-06 battle to secure the Leinster U16 Ladies Football Championship. It was their second win over Meath in the provincial competition and they added to it a 5-09 to 0-04 win over Laois along the way. Their defeat at the hands of Kildare in the final round was the only blot on a perfect record.

Keeling has named a sold team to start tomorrow night in Coralstown, so let’s hope we’re looking forward to an All Ireland U16 Final on July 13th.

It’s the final round for Jimmy Greville and his Intermediate Camogie Panel, and the girls in blue will be hoping to finish the competition on a high. They face a Carlow side who have had similar fortune in this year’s competition. Of their four games both sides have won one and lost three so far.

They both sit in the Group 1 table on 3 points with Carlow’s score difference slightly better than Dublin’s The only team below them in the table is Laois who face Westmeath at the weekend. It will be a tough encounter for Laois as they’re expected to be the team in Group 1 fighting to avoid relegation.

But Dublin and Carlow still need to put in a good showing in case there are any upsets in that game. Throw in is 2:00pm at Trinity Sports Grounds.

The Dublin Senior Camogie panel will look back on draws against Tipperary and Clare in this Championship and feel like they left two wins behind them. And had they have picked up those extra points, they’d be going into this weekend’s game against Wexford with a knockout slot already secured.

As it stands Adrian O’Sullivan’s side can still qualify for this year’s Quarter Finals, but they must travel to Wexford and come away with a victory on Saturday. With Cork being the only side to hand Dublin a draw, confidence will still be high in the camp, and they’ll be facing a Wexford side who’ve only managed one win in the competition so far.

Three points on Saturday and the All Ireland dream is still alive for these girls. But even if they lose, they can hold their heads high knowing they definitely competed this year to the best of their abilities.

Join us throughout the week where we’ll being you more news on these fixtures and the teams involved.