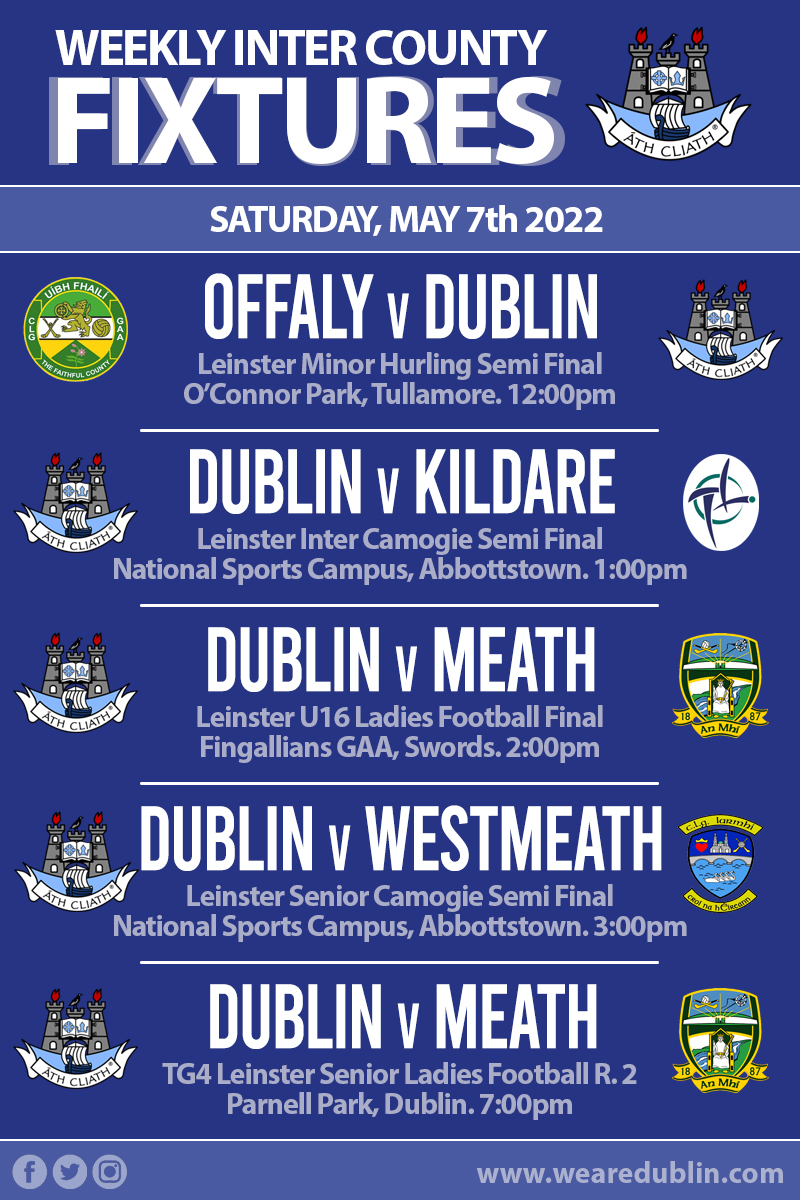 With a loss and a win in the Round Robin phases Dublin avoided a quarter final, advancing automatically to this weekend’s Leinster Minor Hurling Semi Final. And they’re up against Tier 2 side Offaly.

Dublin narrowly lost to Wexford in the opening round of the competition by a solitary point. The game in Parnell Park finished 2-23 to 3-21 in favour of Wexford, but Dublin picked themselves up after that game for a trip to Nowlan Park on Easter Saturday.

That away trip saw Dublin come away with a 3-14 to 2-16 win. And as Dublin, Kilkenny and Wexford all finished with one win and one loss, Dublin and Kilkenny advanced to the Semi Finals on a greater score difference to Wexford.

A huge Leinster Camogie Double Header will be played out in Abbottstown this Saturday with the Dublin Intermediate Panel starting as the curtain raiser.

Jimmy Greville’s panel came away from last weekend’s Quarter Final with a 2-15 to 4-05 win over Carlow. Despite conceding two goals each half to Carlow, Dublin’s point count was a lot stronger, and with Siobhan Kehoe registering two second half goals, it was more than enough to secure the win and advance to Saturday’s last four clash.

Saturday afternoon sees Dublin face Meath for the second time in the Leinster U16 Ladies Football Championship, but with the stakes this time a lot higher this time around. It’s the decider in the competition with both sides already meeting in the opening round.

Back on March 5th, the Metripolitans were 4-09 to 2-09 winners in the Round 1 game at Navan O’Mahony’s. They followed that with comprehensive 5-09 to 0-04 over Laois securing a slot in the decider, despite losing to Kildare in the final round.

With ony two goals seperating them in that opening round, Suturday’s game will be a very close knit contest, with a provincial crown on the line.

It’s been over a month since Dublin defeated Down at Croke Park to end their Littlewoods Camogie League Division 1 Campaign on a positive note. And now Adrian O’Sullivan’s Senior Panel face their Provincial Championship, starting at the Semi Final stage.

With wins over Offaly and Down and losses to Galway and Tipperary Dublin had a fine balanced league campaign. Even in the defeated games, Dublin played good skilled camogie and never let their intensity drop. Saturday’s game will be a good test of their mettle and it will give the manager a good sense of where they’re at before the All Ireland Series.

For the second time this year, Dublin and Meath will go head ot head. This time it’s for Leinster honours. The sides are most likely to meet in the competitions decider, but Dublin will want to lay another marker in this round game. And there’s no better way to round off an busy Saturday than in Parnell Park.

Mick Bohan’s side comfortably beat Westmeath by 6-23 to 0-04 in Mullingar last weekend, and Meath will be tipped to do the same in a couple of week’s time. Dublin were one point winner over Meath in their league fixture back in March. They came away form Pairc Tailteann 1-09 to 1-08 winners which will have atoned in some way for their loss to the Royals in last year’s All Ireland Final.

The Leinster title will be the only thing on their minds this weekend, but it would feel good to get another win over Meath under their belts in 2 fixtures.

Be sure to stay tuned over the weekend for team annoucements, news and report form all the weekend’s Inter County fixtures.