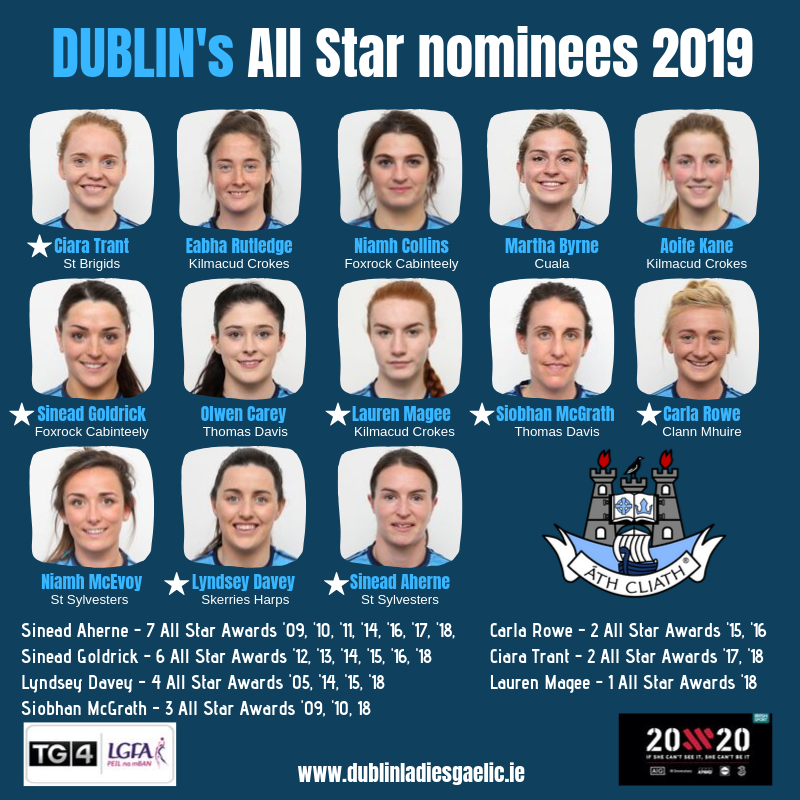 WITH the dust settling on another record-breaking season of Ladies Football Championship action, the 45 nominees for the 2019 TG4 All Star team have been revealed.

Senior champions Dublin, who made history by claiming a third successive title in front of a record 56,114 attendance at Croke Park, lead the way with 13 nominations.

There are nine nominations each for Galway, the 2019 TG4 All-Ireland Finalists, and Mayo, who were beaten by their Connacht rivals in the provincial Final replay and at the All-Ireland semi-final stage.

Munster Champions Cork, who lost out to Dublin in the All-Ireland semi-final, have been acknowledged with seven All-Star nominations following a season that also saw the Leesiders claim the Lidl National League Division 1 title.

Seven players from the 2018 All Star team are nominated for awards once again – and six of those are Dublin players, along with Galway’s Sinéad Burke, who received a first TG4 All Star award last year.

The efforts of TG4 All-Ireland Intermediate Final Player of the Match Aishling Moloney and Tipperary team-mate Aisling McCarthy have been recognised with All-Star nominations, while Tyrone have Niamh McGirr and Emma Jane Gervin nominated.

Moloney (nominated for a third successive year), McCarthy and McGuirk are the Intermediate Championship representatives on the 45-player list.

One player will be chosen from the three shortlisted in each of the positions to make up the final selection, with the exception of midfield, where two from six will be chosen.

The 2019 TG4 All Star team will be announced at a gala banquet at the Citywest Hotel on Saturday, November 16, along with the Junior, Intermediate and Senior Players’ Player of the Year award winners, the Provincial Young Players of the Year and the 2019 inductee into the Ladies Gaelic Football Association (LGFA) Hall of Fame.

Bohan: Talk Of Dublin’s Dominance Undermines The Effort Of The Players

Mick Bohan – Some Of The New Kids Were Really Impressive