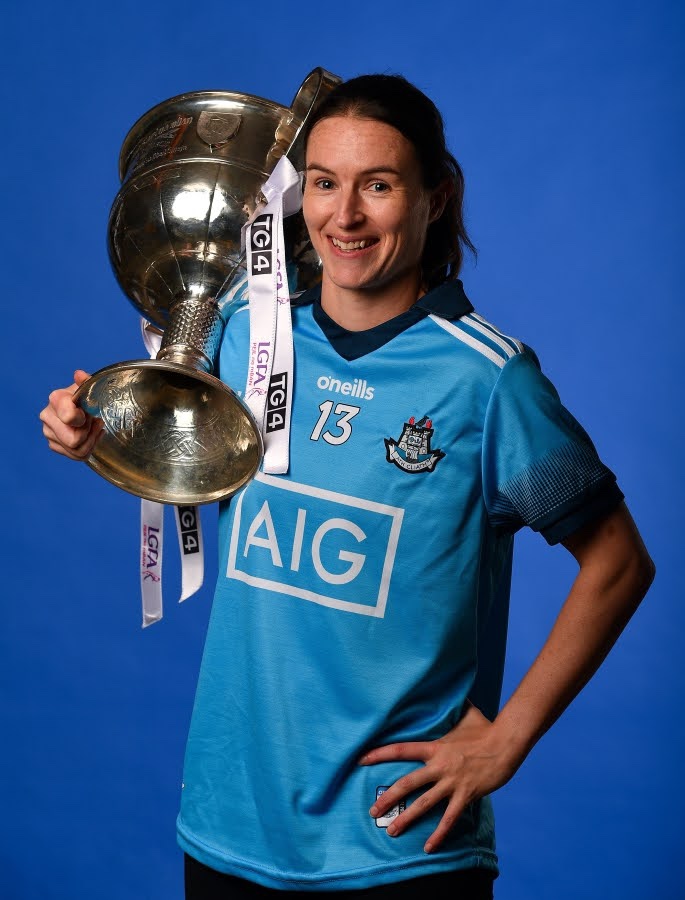 Ahead of Dublin’s opening game against Donegal in the TG4 Senior All Ireland Ladies Football Championship we spoke to Dublin captain Sinead Aherne to get her thoughts ahead of the game.

Preparations for the championship have been anything but normal this year with squads returning to training much later than usual and having a much shorter time to prepare and among a background of health protocols due to Covid.

Sinead expressed how hectic it’s been trying to fit everything in, but is also grateful to be back as it’s given everyone some semblance of normality considering the year that it has been.

“It’s very different than normal, in our own circumstances you know with the Leinster championship it’s very short for us, it’s one game and it would have been no games this year.”

“We traditionally had a longer term with club and then running into the group phase of the All Ireland we would have lots of time to try and work or way into things where as this year you are trying to fit a preseason, friendlies, tactical pitch work into about six or seven weeks so it’s been hectic.

“But i suppose given everything that’s been going on it’s been great to get back and keep that sense of normality, even though things are different in how we are having to do things still having that outlet has been really good to have.”

Dublin start the defence of their title on Saturday against Donegal side that will pose a huge threat to Dublin.

With just one team emerging from the group the Dublin captain knows if the sky blues get caught by Donegal on Saturday with the shortened championship that will all but spell the end of the road for the reigning champions.

“Yep that’s it said Sinead, it could be a very short championship for us, and we are well aware of that, Donegal are obviously a huge threat and like I said normally you are going in with a game, for us it would be a Leinster final and win or lose your still running into a group scenario you have a chance to regroup and a good chance of getting out of your group.

“But it will be a tough group this year and by all means if we get caught by Donegal on the first day that’s it, it’s a six week championship and that’s the end of it so, we would like to be playing as long as we can, obviously that’s the way you want to win it, of all the years I think to be able to keep training, to keep advancing in the championship would be a nice distraction people.”

With no provincial championships this year for any of the teams everyone is starting out on an even keel and Sinead expressed how interesting it will be to see where exactly each team is in terms of form during the opening round of games.

“There is no form lines really, I think anything that happened earlier in the year in terms of league is probably redundant at this stage and obviously you don’t know where teams and squads are at in terms of injuries and form and all the rest of it so there’s not a lot to go on so I think it will be interesting to see where everybody lands in the first weekend of matches.”

The Dublin Captain fully expects Donegal to come with all guns blazing and Sinead hopes Dublin have managed in the short time available since they returned to training to have prepared well enough to deal with what their opponents bring on the day.

“I always would have thought that Donegal are well capable of challenging for All-Irelands. Maybe of all years, 2020 suits them. They probably have challenges every year with player availability and travel. Maybe with more home-based players, they have had their players together more consistently.

“I’m sure they will fancy a crack at taking down the All-Ireland champions in the first game and that’s something we have to be ready for, it’s difficult because we have had such a short run in and you can play in-house games, you can a couple of friendlies but championshippace is a different beast so when we get out there we will find out on the day whether we have managed to prepare as best we can but we know that Donegal are coming fully loaded into this one.”

Ahead of the start of this year’s championship at the weekend Sinead highlighted the need for help to pay the expenses of elite female players in Gaelic games.

Male players in the GAA have the cost of their trips to training covered, but LGFA and Camogie players are still having to foot the bill and under current rules due to the health crisis players are asked to travel alone to training so they can’t even car pool.

The Dublin captain acknowledged its even more difficult for players outside of Dublin but all players are out of pocket and something needs to be done for everyone.

“We are being asked to travel to training in a solo capacity, which is difficult. In Dublin that might be shorter distances, but we still have girls travelling over the toll bridge twice a day to go training. That adds up fairly quickly.

“You can look at it in one way and say, we are still not at the level men’s sport is at in terms of bringing in gate revenue, but I think it is time to try and take a step forward and maybe look at it from a different approach and get maybe additional government support to help girls out.

“We are fortunate to still be playing, but equally, we need to put our hands up and ask the question, is there more that can be done?”

Attendances at games have steadily increased over the last six or seven years as interest in the game gathers pace. Attendance records have been broken in the last couple of years with over 56,000 streaming through the Croke Park turnstiles for last years All Ireland finals.

Despite these huge increases in attendance figures Aherne acknowledges that county boards are unlikely to be able to provide all the funding that players want for expenses and believes some form of government grant similar to the one that elite male players get could be the solution.

“It’s a combination at grant level in terms of government who are well behind the men’s funding that gets allocated.

“Their allocation does go to individual players, but obviously that’s backed up by the GAA revenue that comes in and gets allocated to the GPA.

“But it’s not just the government. We’d be hopeful to have conversations with the GAA, the LGFA, and the Camogie Association about what might be able to be done to pool resources around helping players out, but really raising the standards of the game.

“It isn’t just monetary reward, it’s compensation for players to try to put them in the best possible position to perform to the best of their ability.”

Covid-19 has been all consuming this year and is naturally at the back of everyone’s minds, but Sinead is satisfied with the precautions Dublin have been taking and hopes things can improve on a national level and hopes the championship can continue to a conclusion.

“I’m satisfied with the precautions that we have been taking,” she says.

“It’s just been every time I have had a chance to go training, it has been like a bonus. It’s not perfect in terms of how you would like to prepare for the championship, there probably will be cases where people will have to step out for periods of time. I think we just have to roll with it.

“There are no guarantees, there can’t be. You could look at it that in terms of going into Level 5, there is probably less opportunity for players circulating.

“We’re probably in a slightly safer position, but there are still a lot of players that are probably heading out to jobs where…it’s not something I think you can be 100% comfortable with.

“From my own perspective, I’m reasonably happy just to see where we go. If things can improve on a national level, hopefully the championship can continue.”