The countdown is well and truly on for this Sunday’s highly anticipated TG4 Senior All-Ireland Ladies football final between old sparring partners Dublin and Cork.

Dublin completed the three in-a-row last September against Galway in a cagey and low scoring decider. Much of that caginess was the result of the dreadful weather conditions both sides had to deal with in terms of underfoot conditions and ball handling.

Although it was a difficult game to play in Dublin Captain Sinead Aherne believes that both sides in last years decider were maybe too cautious because of the weather but, looking ahead to Sunday’s encounter she expects neither Dublin or Cork regardless of the weather will be pulling any punches.

“The low score shows the difficulty that both teams had on the day, it was the worst kind of rain the drizzle that sits on the pitch – maybe both teams on the day were a little too cautious because of that – we have probably had a lot more practice training in poorer conditions coming up to this final so hopefully skill sets will be high and we adapt on the day and deal with it but, neither team will be pulling any punches no matter what the weather is.”

With the shortened and condensed championship this year teams haven’t had much opportunity to see and assess opponents.

With no coverage of Cork’s semi final win against Galway it deprived Sinead, her teammates and the Dublin management to run the rule over their final opponents.

When asked if that hampered Dublin’s preparations leading into Sunday’s game at all, Sinead didn’t think so particularly considering how much they know about Cork from their regular meetings over the last number of seasons.

“We know a lot about Cork, over the years we played them a number of times and their a fast team they are an attacking team but they defend very well and I don’t expect anything too drastically different on the day from what they have been putting into practice throughout the rest of their games this season so look we will see.

“We need to be prepared for what ever happens on the day. Through our own preparation we expect to be able to put up with what ever gets thrown at us.”

Jack McCaffrey spoke recently how the the pressure and constant grind at the top level took the fun out of the game for him and ultimately led to him walking away from the Dublin panel.

Sinead will be appearing in her tenth All-Ireland Final on Sunday since her Senior debut back in 2003, during her playing career did she ever find it difficult to keep coming back under the pressure of playing for a team expected to get to All-Ireland finals year after year for the last decade?

“No, I don’t think it’s a pressure, it probably is when your winning consistently at their level as they have and now going for 6 in a row!

“I don’t think we have ever felt a pressure from having won, as I said we don’t see the season before as being a force to put pressure on us for the following year.

“Probably this year with the Donegal match there was a lot of pressure on that match because it nearly felt like a knock out match straight out the gate and after the year that everyone had had and not knowing was it going to happen and being such a long year I think that was maybe a little bit more pressure.

“But I suppose the only other time around that, that really had considerations was back in 2017 when there was a new manager coming in – it was probably a natural break to think having not had success and giving it everything was it time to do something different but obviously I’m glad I didn’t make that decision at the time.”

Cork’s Juliet Murphy along with Dublin’s Sinead Aherne are the only two – 3 in a row All-Ireland winning captains.

On Sunday Sinead Aherne has the chance to be the first ever four in a row winning captain. But for the St Sylvesters club woman those type of accolades are very far from her thoughts. But what does it mean personally for Sinead to be team captain?

“I’m very privileged to be captain of this team and when Mick came in there was a huge number of candidates that could do that job, so as I said a privilege for me to be doing it but its very much a role that’s shared throughout the team.

There is a lot of leaders that have come to the fore for us over the last number of years and on any given day we have people that can stand up all over the pitch and do that so that’s a great position for us to be in.”

Over the last number of years the ladies game has continued to break attendance records on All Ireland final day.

This year though will be completely different for the players, because of current restrictions the players will be greeted by silence rather than the huge din of noise they normally associate with finals day.

How much different will that be and will it a major factor on the day? For the Dublin captain the fact the team have played in Croke Park a number of times, Sinead doesn’t think it will be too big a factor.

Sinead throughout her long career has played under a number of managers with Mick Bohan the latest in charge for the last four seasons.

In those four successful years how had the players found Mick’s development as a manager from when he came in first to now – had he changed much in terms of how he dealt with everyone across the board.

For Dublin Captain Aherne the journey under Mick has all been about his constant drive for the group to evolve and develop and he very much encourages the players to be central to that journey.

“When he came in initially maybe some of the things were trying to get used to – what speed or what style of play was in women’s football, so I think he brought a very attacking side of the game probably when he came in first.

“As we have been successful, teams have looked to us more and more and have tried to break us down more and more – its just been really tweaking what he has been doing with us and we are constantly looking to evolve and develop so I think he has done that with us and players are very much involved in that journey and very much encouraged to develop and to think about the game ourselves so its evolved and grown as he has gone through his term.” 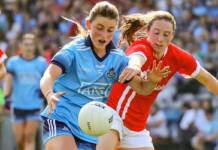 Dublin U16 Ladies Footballers Get Leinster Campaign Off To Winning Start