Sinead Aherne: ‘Meath are coming with their own particular style, and we will be looking to do likewise so I think it could be an intriguing battle in that way and we are looking forward to that.’

Dublin captain Sinead Aherne will once again lead out the team on All Ireland final day in Croke Park today with the Dubs chasing a fifth title in a row.

The St Sylvesters player has been a unbelievable servant to Dublin since her debut against Longford in 2003 and she has had her fair share of triumphs and disappointments during her long career.

Dublin are according to the bookies and pundits red hot favourites to prevail today given they are champions for the past four years and Meath are appearing in just their first Senior final.

Having been around the All Ireland Championship block a few times, Sinead Aherne isn’t buying into the narrative that Dublin are hot favourites and points to the fact that Meath are in the final on merit and that in turn will see Dublin give them the full respect they deserve.

“Meath are there on merit. They have got to a final and they have been impressive in the championship so far, we have obviously had a look at them over their championship run and we expect a huge battle.”

“They have come through some tough matches, they took on Cork in the last match, Armagh in the previous match, same points over the last two years so, to say we are favourites… I suppose we have the experience of being in senior finals, but Meath have had plenty of experience themselves in terms of being in Croke Park, division two this year and three intermediate finals on the bounce. I know that they have probably taken a lot of confidence from that and we will give them full respect.”

Hunger is a term often thrown around in punditry and the press at teams who have enjoyed a sustained successful spell. And the question of complacency normally raises it’s head at the same time.

But for Sinead Aherne complacency won’t be a factor for Dublin today, besides no talk among the group about the fact Dublin are going for five in a row, the squad and the management team are very aware of the threat Meath pose.

“The five in a row, it’s not something we have spoken about says Sinead, as I said we have had a look at Meath and are fully aware of the threats that they have, and we are looking forward to the challenge.

“We haven’t played them in a few years, so it’s been a nice freshness for us as a team that we haven’t met competitively and as I said we have been impressed by what we seen we are looking forward to coming up against that challenge.”

Although Dublin have plenty of experience playing in the Senior All Ireland Final in Croke Park, Meath are not short of experience themselves playing at Croke Park and an intriguing battle lies ahead today according to Aherne.

“Yeah, I think probably both teams have experience of coming into finals and it helps.

“You can get into a match where you are able to separate the occasion from the match and we are really looking forward to the fresh challenge of playing Meath and trying to impose our game plan on it.

“Meath are coming with their own particular style, and we will be looking to do likewise so I think it could be an intriguing battle in that way and we are looking forward to that.”

All Ireland Finals are very special occasions for everyone involved including supporters but last years final was an eerie experience in an empty Croke Park.

Thankfully today’s decider will be full of noise, colour and atmosphere and Sinead Aherne is looking forward to the extra bit of excitement that will bring to the game.

“It was strange obviously going into Croke park last Christmas, you could walk into Croke Park and there was nobody around which was just kind of a different experience, so getting back to the colour and the noise and having friends and family there will add that extra bit of excitement to the game, particularly in those close tense moments its good to kind of know that you have that and its been nice to play summer football again and to have that bit more freedom than we would have had in the preparations than last year.”

Mick Bohan had spoken in the lead up to today’s final about the fact he didn’t get any enjoyment out of last season. Sinead explained that last year was very pressurised and there was no opportunity to develop the squad, spend time together or create any type of atmosphere within the squad.

“Last year was pretty different in that there was a league that stopped and essentially a new season that started seven weeks before your first championship match which brought a lot of pressure.

“It was essentially knockout football and we hadn’t played in that kind of format before and we were coming up against Donegal so we knew we were straight into the fire in terms of that one and you just had no sense of where you were at, so it was much more pressured.

“The matches were kind of coming at you and then there was the different weather conditions, we were still under lockdown at that stage so in terms of how you can develop your squad and spend a bit of time together, we just didn’t really have that.

“Football is the football side of things continued Sinead, but there is so much more that goes into team sport, you want to try and create that atmosphere and there are new players and development and all that kind of stuff that we really didn’t get a chance to do last year.

“So, I think it’s been a lot more enjoyable this year, the league campaign and then straight into summer championship football.

“Getting a chance to play more teams, getting a chance to bring in new players and the outdoor conditions and you have been able to do a bit more in terms of team bonding and that type of stuff so, I think it’s been much more enjoyable this year.”

Meath will pose plenty of challenges for Dublin today with their defensive structure, Meath though are not the only team Dublin have encountered this season who set up defensively and attack on the counter with pace.

In the group stages Dublin came up against a Tyrone team that flooded their defence with players and broke quickly when they overturned the ball. Sinead admits that although Dublin struggled early on in the game to navigate through the Tyrone roadblock the players found the answers in the second half and Sinead is confident that the Dublin team has done the work in the lead up to today’s final and will be able to execute their game plan on the game.

“Tyrone was a really good game for us to kind of kick things off with as they asked us a lot of questions particularly early on in that match, as much as we can be prepared on paper for it, it was good to come up against it in practice and we probably didn’t deal with it great in the first half and then found the answers to some of the questions in the second half.

“With Meath I think there will be patches where you might get on top in swings and roundabouts in that way, I don’t think its gonna be a case that any team gets to fully impose their own game plan on it so we will just have to roll with that a little bit and be patient in how we try and approach it as well. Meath have been impressive, but we back ourselves to have done the work and be able to execute.” 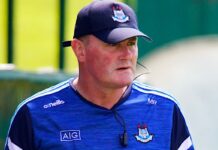