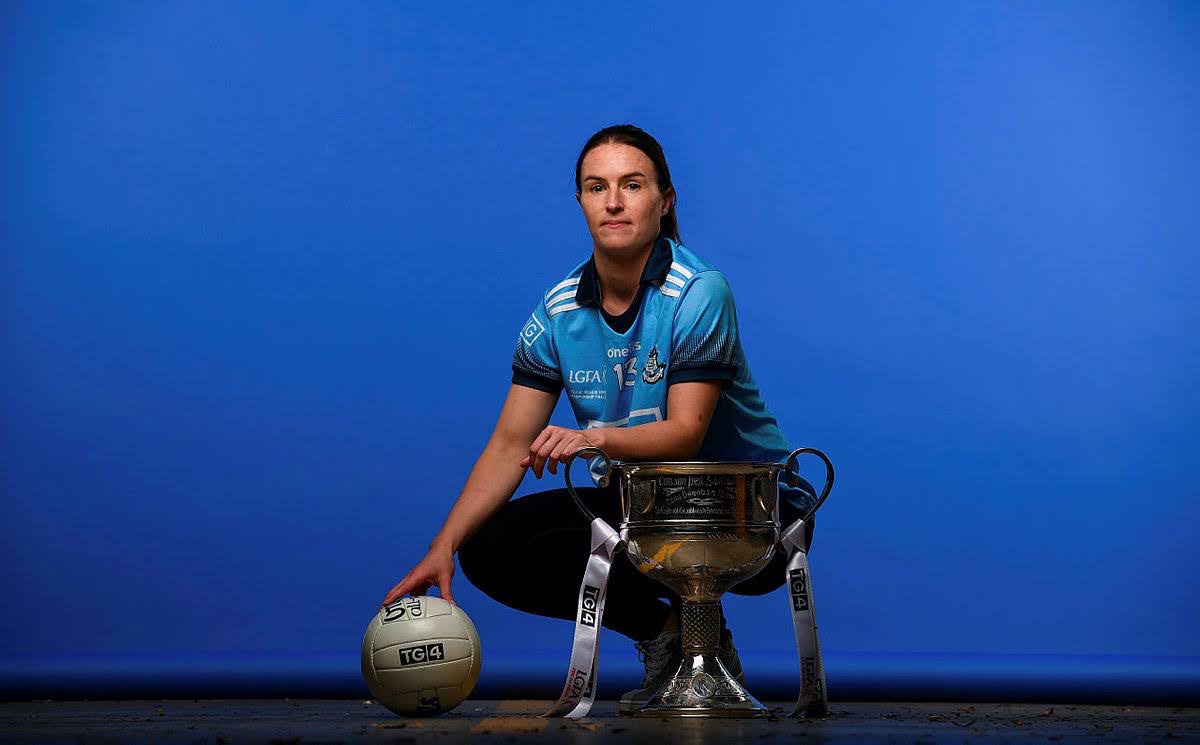 Dublin captain Sinead Aherne is confident of she will be fit for selection for her sides TG4 All-Ireland Senior Ladies Football final against Cork on the 20th of December.

Aherne lasted just 25 minutes of last months semi final against Armagh in Breffni Park, the St Sylvesters attacker jumped to challenge for a ball along the sideline on the stand side and pulled up upon landing and was replaced by Siobhan Killeen.

Speaking to at a virtual press conference this afternoon Sinead expressed the injury was a hamstring tweak and although she missed a couple of sessions last week Sinead was back training this week and is confident she will be available for selection for Mick Bohan’s sides decider against Cork.

“I felt a little a little tweak and it was possibly a case that I could have carried on, it was a cold night and we’d just come off a water break and I maybe hadn’t quite warmed it up again.

“It was only a little tweak and I missed a few training sessions after it but I’m back on the pitch and it’s looking good now for Sunday week.”

Dublin are appearing in their seventh straight All-Ireland final this year and although the Dublin Captain believes it shows a good measure of consistency from her side, it also, due to what has been a strange season, won’t count for much this year.

“It’s a good measure of consistency which obviously is important. There’s lots of experience in the team at this stage.

“We started out with not such a great run with the ones that we lost, but we’ve managed to turn that around and still make final appearances and turn them into winning ones.

“This season is very different in its own right, it’s been a strange season, it’s even different time of year to be preparing for a final, it definitely feels like a stand-alone one and I think year on year, every year you come back is different in how the team is and how the set-up is – so I don’t think what’s gone before really counts for much when you come back.”

There was some controversy with last weekends All-Ireland semi-final between Cork and Galway with that game requiring a late switch of venue to Croke Park due to a frozen pitch at Parnell Park. Besides the change in venue the throw-in time had to also be brought forward to 1pm.

The switch of venue meant the game which was originally due to be broadcast live by TG4 couldn’t then be facilitated for coverage and the change in the start time left Galway with limited time for their warm-up before the match.

When asked for her thoughts on last Sunday’s events Dublin Captain Sinead Aherne said it was a hugely disappointing situation for both teams and that expected standards were not upheld and that questions needed to asked so that lessons can be learned so that something similar won’t happen again in the future.

“I think it was hugely disappointing situation for both teams and players deserve respect and deserve more than what happened.

“Particularly in the current environment and for their families who aren’t even able to watch the game at home. Obviously there’s a number of contributing factors and people were doing what they thought was best as the situation unfolded.

“You obviously hope that it won’t occur again and the sport has made huge strides and lots of good work being done but, there are standards that need to be upheld at this level and that didn’t happen and we have to have moved past just accepting our lot and just getting on with things.

“So I think it was particularly disappointing that having a completely unacceptable outcome wasn’t acknowledged in the aftermath and questions I think need to be asked about various factors in the timeline and parties involved so that lessons can be learned and the sport can move on, on a better footing.”