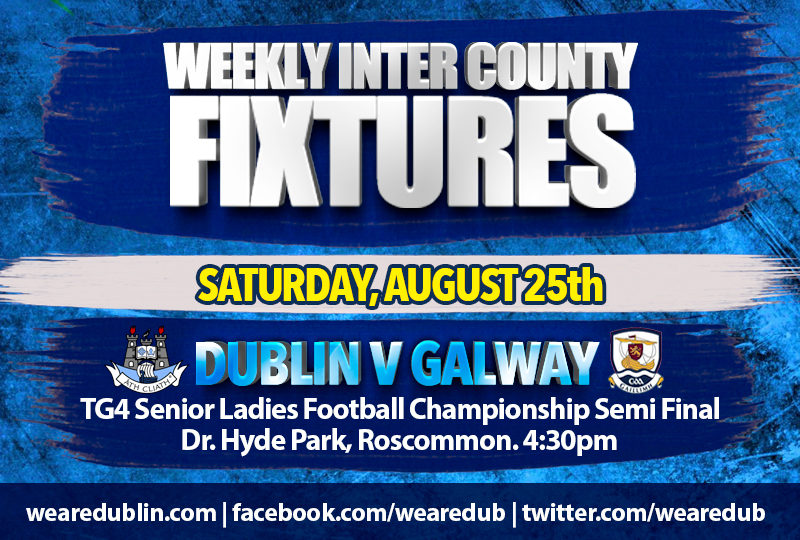 Last week was a Camogie weekend and Dublin’s Premier Junior panel advanced to this year’s Liberty Insurance Championship final with a victory over Offaly in the Semi Finals. This weekend our attention turns to the Senior Ladies Football Championship. Here’s what you need to know.

Saturday afternoon, Mick Bohan’s Senior panel make yet another trip to Dr. Hyde Park in Roscommon as they vie to reach yet another All Ireland Final. Standing in their way is a tough Galway side who swept away the challenge of Mayo in the Quarter Finals a couple of weeks ago. At 5-11 to 0-12 Galway punished last year’s All Ireland Finalists, reaching a semi final for the first time since 2014.

Dublin took on Kerry that same day and in a very dominant second half performance ran out comfortable winners on a score of 3-19 to 1-07. Sinead Aherne, Niamh McEvoy and Hannah O’Neill all hit the net for the girls in blue as they romped to victory, taking complete control after they lead by a goal at half time.

This is Dublin’s third consecutive game in the Roscommon venue, and they’ll be hoping that by 6:00pm they’ll be heading for home, ready to prepare for another Final and the dream of retaining their All Ireland Crown. Throw in at Dr. Hyde Park is down for 4:30pm

And for anyone interested in getting to Dr. Hyde Park early, the other Semi Final between Cork and Donegal throws in at 2:45pm. Cork blew Westmeath out of the water in their Quarter Final on a score of 8-18 to 1-06, while Donegal has a slightly closer last eight win over Armagh with the game finishing 0-19 to 1-13.

And that’s this weekend. One massive game! Let’s hope we’re preparing for another All Ireland Final.