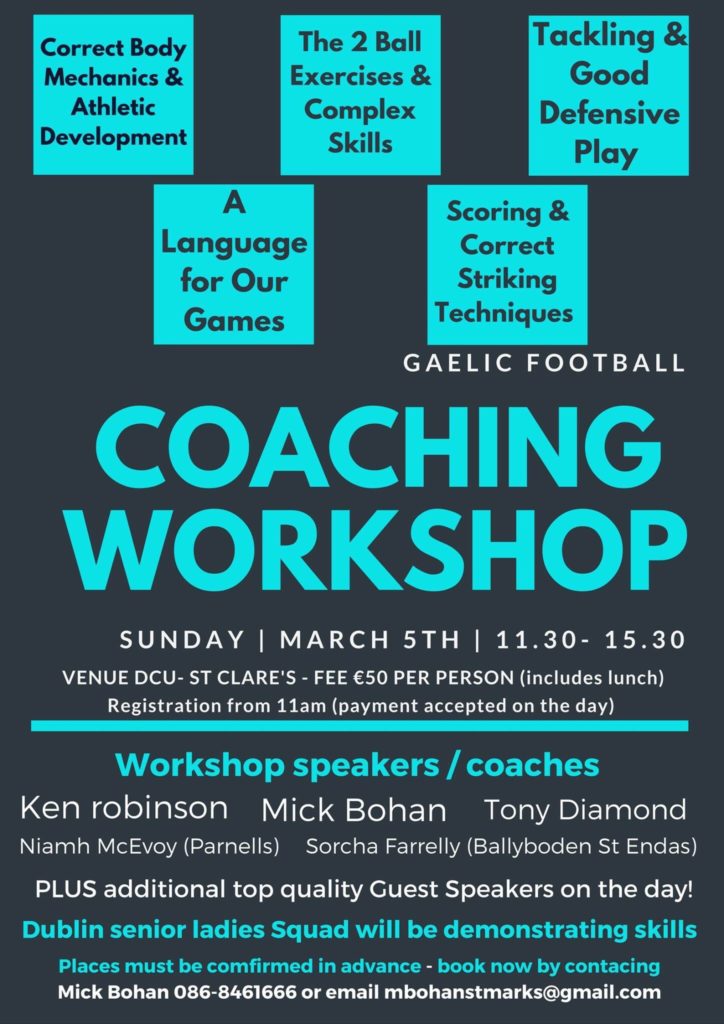 The aim of the workshop is to help club coaches introduce the key skills of the game in an innovative stimulating fun way.

Mick has coached at all levels from GAA Inter County at senior and U21 level, Colleges (winning Sigerson Cup)and is the current Dublin Ladies Inter County manager having previously led Dublin to their first senior Provincial title back in 2002.

Tony was a member of the 2008 St Vincent’s club management team with Mickey Whelan that achieved All Ireland club success. He was also a defensive coach with DCU when they secured three Sigerson cups and an O’Byrne cup victory the latter was viewed as an unprecedented win for a college team.

Ken is the CEO of DCU Sport and is currently doing a Masters in athletic development.
He was a member of the Ballymun Kickhams management team that won the Dublin and Leinster championships only to lose out narrowly to St Brigids (Roscommon) in the 2013 All Ireland club final.

Niamh, a member of Parnells GAA club is a former Dublin captain and is currently coaching the DCU O’Connor side. She was part of the Dublin senior management team that reached the 2016 All Ireland final versus Cork having previously coached Kildare to the Intermediate final in 2015.

Additional top guest speakers will be announced in due course.

The coaching workshop will run from 11:30am to 15:30pm in St Clare’s DCU – with registrations taking place from 11:00am. Workshop fee is just €50 which includes lunch.

The Dublin Ladies Senior football team will be demonstrating the skills on the day.

Places must be booked in advance by contacting Mick Bohan 086-8461666 or email mbohanstmarks@gmail.com payment will be accepted on the day.