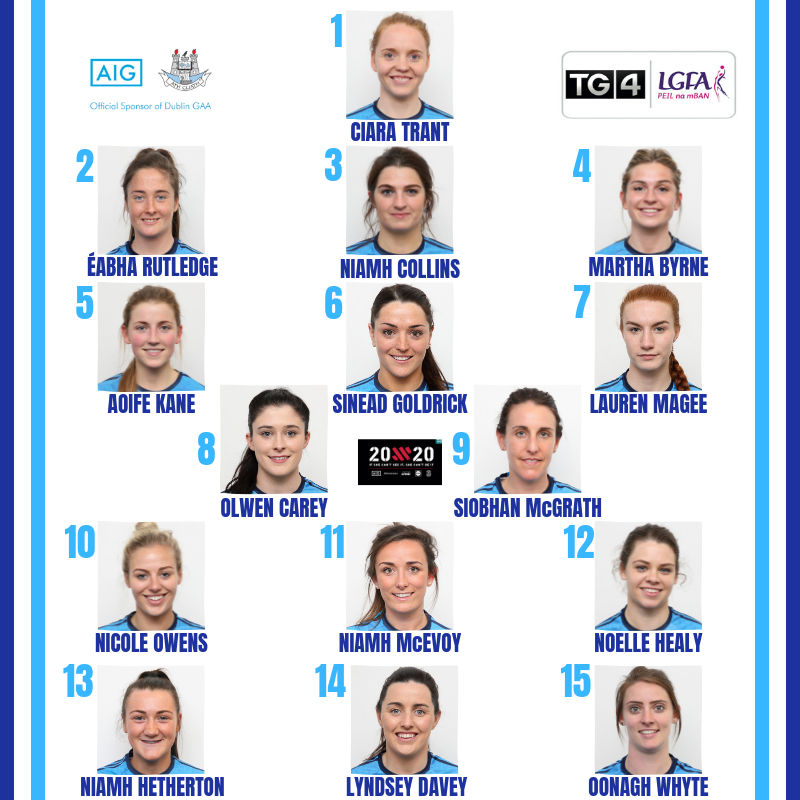 Dublin manager Mick Bohan has kept faith In the starting 15 that began Dublin’s opening game in the All-Ireland series against Waterford two weeks ago for tomorrow’s game against Monaghan.

There is good news for Dublin supporters with the inclusion of injured duo – captain Sinead Aherne and forward Carla Rowe who are both listed among the Dublin substitutes for the Monaghan game.

Both players missed the opening group game against Waterford, Aherne picked up a shoulder injury 11 minutes into the Leinster final against Westmeath and Rowe has been a longer term absentee and hasn’t featured for Dublin since their National Football League semi-final loss to Cork back in April.

While Dublin enjoyed an impressive 5-15 to 2-06 win over Waterford, their opponents tomorrow Monaghan endured a heavy defeat to The Déise with the final score 7-19 to 1-10.

Monaghan are a team in transition and that’s reflected in their demotion to Division 2 of the National Football League for next season and thry find themselves in the unenviable task of needing a good win over Dublin to avoid a championship relegation battle and demotion from the senior ranks.

That’s a tall order against a Dublin side chasing a third All Ireland title in-a-row and racking up huge scoring rallies along the way.

The Farney County will need to keep a keen eye on Dublin’s key forwards Niamh McEvoy, Nicole Owens, Lyndsey Davey and Oonagh Whyte who have amassed an impressive 9-18 between them in two games.

But for Monaghan stopping those four is easier said than done and Dublin have scoring power from all sections of the team and it will require more than successfully keeping one or two of the above named forwards quiet tomorrow for Monaghan to secure a much needed win.

Key players for Monaghan will be the McAnespie sisters, Ciara, Aoife and Eimear and team captain, Cora Courtney has been one of the Country’s top footballers for some time and Dublin’s defence will need to keep a close eye on her as give time and space Courtney can cause plenty of problems.

Tomorrow’s game in Parnell Park is Dublin’s first home game in the championship in 3 years and one certainly not be missed.

Supporters can pay at the turnstiles and the admission prices to the game are: Adults €10, Students/OAP’s €5, U16’s €2, U12’s FOC (Note: Parnell Park Passes do not apply as it is a non- Dublin GAA fixture).