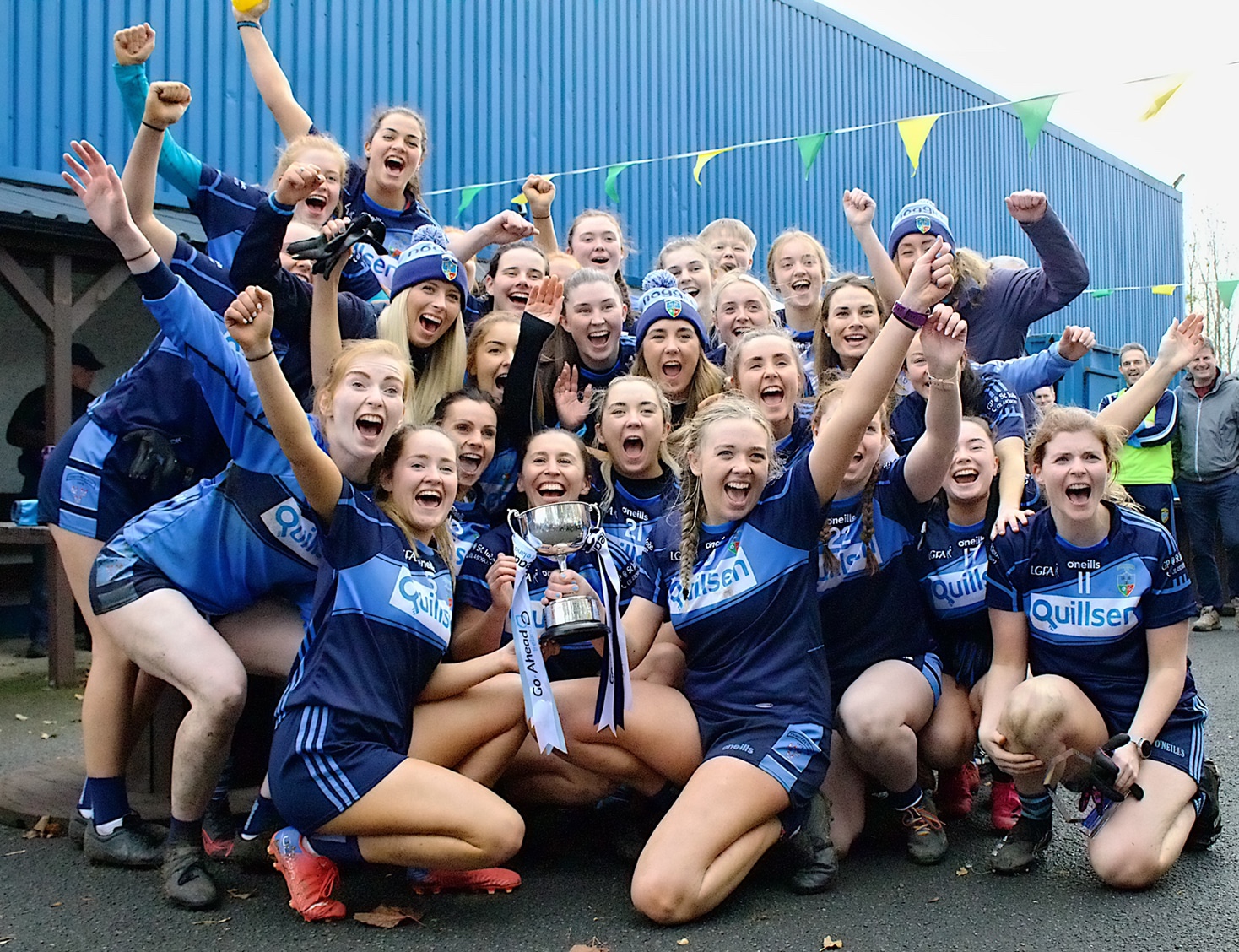 Hannah Begley and Ellie Young were in top form at St Margaret’s on Sunday afternoon as St Jude’s claimed the Dublin LGFA Junior Club Championship crown with an emphatic final victory against Clontarf ‘B’.

Supplementing a six-point haul from her inside partner Young, Begley registered a hat-trick of goals for the Templeogue-based outfit. Having lost out to southside rivals Ballinteer St John’s in last year’s junior showpiece, this was a sweet success for Jude’s.

Ciara O’Connor and Grace Smyth did their level best to keep ‘Tarf in the reckoning with the attacking duo ending the contest on 1-2 apiece from play. Maeve Walsh was also prominent throughout, but they ultimately couldn’t halt the march of their Tymon Park counterparts.

This was the second meeting between these two teams in this year’s competition, following their Group B clash at St Anne’s Park on 22 September.

It was St Jude’s who prevailed in that game on a final score of 1-19 to 0-10, a result that went a long way towards ensuring they sealed top spot in the final standings.

Nevertheless, ‘Tarf joined them in the knockout phase after securing runners-up spot in the group and they subsequently had the measure of Scoil Ui Chonaill by the slenderest of margins (2-8 to 1-10) in last Sunday’s semi-final derby encounter on the Clontarf Road.

St Jude’s had home advantage for their own penultimate round tie and also emerged with the bare minimum to spare over O’Dwyers (2-4 to 1-6).

While there weren’t any current inter-county footballers on show in this game, St Jude’s did possess a number of Sky Blues camogie stars within their ranks.

This included midfielder Hannah Hegarty, the current captain of Dublin’s small ball side. She was joined in the starting line-up by top-level camogie team-mates Emily Browne and Cliodhna Nicoletti, who – along with a number of other players within the squad – were seeking a unique double having recently gained top honours in the Dublin Senior Club Camogie Championship.

Despite falling behind to Grace Smyth’s second-minute point, Jude’s were firmly in the ascendancy during the early exchanges.

After Young had knocked over a brace of scores, her free from a right-hand angle on eight minutes was flicked to the net by Begley.

This threw down the gauntlet to ‘Tarf, but their initial response to this set-back was impressive.

Walsh was forced to settle for a point when her goal-bound strike rattled the crossbar and a first of the day for full-forward O’Connor kept the northsiders within touch distance.

Nicoletti and O’Connor proceeded to trade scores, which meant Jude’s brought a 1-3 to 0-4 cushion into the first half water break.

Although another Grace Smyth effort left ‘Tarf a single point in arrears on 21 minutes, their opponents took control for the remainder of the opening period.

In the space of just eight minutes, Jude’s amassed 1-3 without reply to propel themselves into a commanding position at the interval.

Capitalising on the hard graft of team skipper Aoife Keyes, Begley lashed home for her second goal of the half in the 22nd-minute.

This was complemented by unanswered points courtesy of Aoife Rocket, Young and Lisa Morris to give Jude’s a 2-6 to 0-5 lead at the midway juncture.

While ‘Tarf netminder Rachel Smyth did save a penalty from Young, the yellow card that was simultaneously dished out to defender Ava Cunningham left them hamstrung on the resumption.

Keyes and Young did find the target either side of an O’Connor free in the third-quarter, but Jude’s passed up some good opportunities to extend their buffer even further.

Even though they remained in the driving seat when Young cancelled out a Walsh point at the opposite end, Smyth’s expertly-taken major on the stroke of the third-quarter mark added fresh life to the ‘Tarf challenge.

Once again, however, Jude’s found an extra gear when it was needed the most. Hegarty’s hard-running was a feature of her team’s performance on the day and she got in on the scoring act with a fisted point on 46 minutes.

A full 12 minutes went by before the next score of the game arrived, but when it did, it heralded an action-filled conclusion to the proceedings.

After seeing her second penalty of the tie turned away by the dependable Rachel Smyth, Young split the uprights in devastating style as the final whistle approached.

It was then left for Begley to place the outcome beyond doubt as she intercepted a wayward ‘Tarf kick-out to complete her hat-trick in consummate fashion.

To their credit, Clontarf continued to battle until the final seconds of the play. O’Connor fired home with clinical precision in second-half stoppage-time and wing-forward Isobel Finnegan also got a chance to try her luck from the penalty spot.

Yet, like her opposite number Smyth, St Judes custodian Aoife McAuliffe was more than equal to Finnegan’s efforts and a gap of seven points remained on the scoreboard in the end.