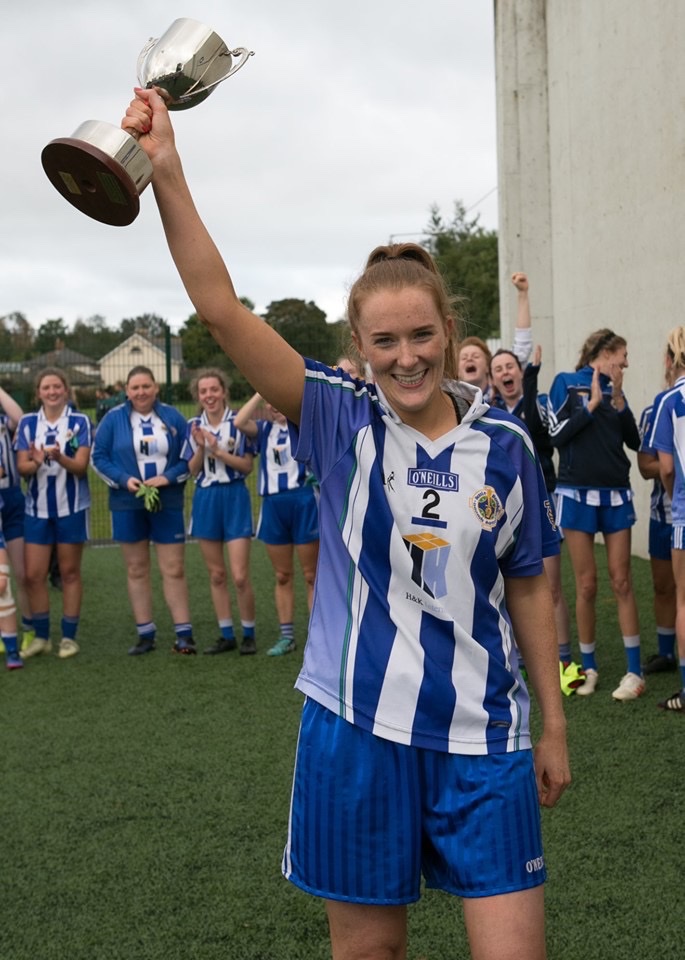 Ballyboden St Enda’s held off a spirited second half display from St Peregrine’s to claim the Dublin Junior ‘B’ Ladies Football Championship title at Lawless Park on Sunday afternoon.

Despite enduring a 25-minute barren spell in front of the posts, Orla Scollard and Louise Kelly pointed late on to seal the deal.

The inside duo proved influential throughout – their combined tally of 0-8 helping ‘Boden to get the better of their Blakestown opponents.

Goals in either half – courtesy of Lisa Sweeney and Aoife Deegan – kept Peregrine’s within touching distance, but they often struggled to break through a stubborn ‘Boden rearguard.

They never allowed their heads to drop at any stage, though, and inspirational midfielder Rachel Brennan delivered an outstanding performance over the course of the proceedings.

This was the second meeting between the two teams in this year’s competition, following their previous clash at Cherryfield on June 19.

‘Boden secured a 4-11 to 0-11 victory on that occasion but with both sides already guaranteed a spot in the knockout rounds, a renewal of acquaintances remained on the cards.

Indeed, on the same evening that Peregrine’s overcame the challenge of Kilmacud Crokes (2-12 to 1-13), their southside counterparts recorded an emphatic 3-11 to 0-9 triumph at the expense of Ballyboughal.

As a result, they once again found themselves in direct opposition at the home of Fingallians – who regularly host finals of this magnitude.

In addition to their continued quest for silverware, Peregrine’s also arrived in the Swords venue with revenge on their minds.

They couldn’t have wished for a better start to the contest as they rattled the back of the ‘Boden net with just under two minutes gone on the clock. 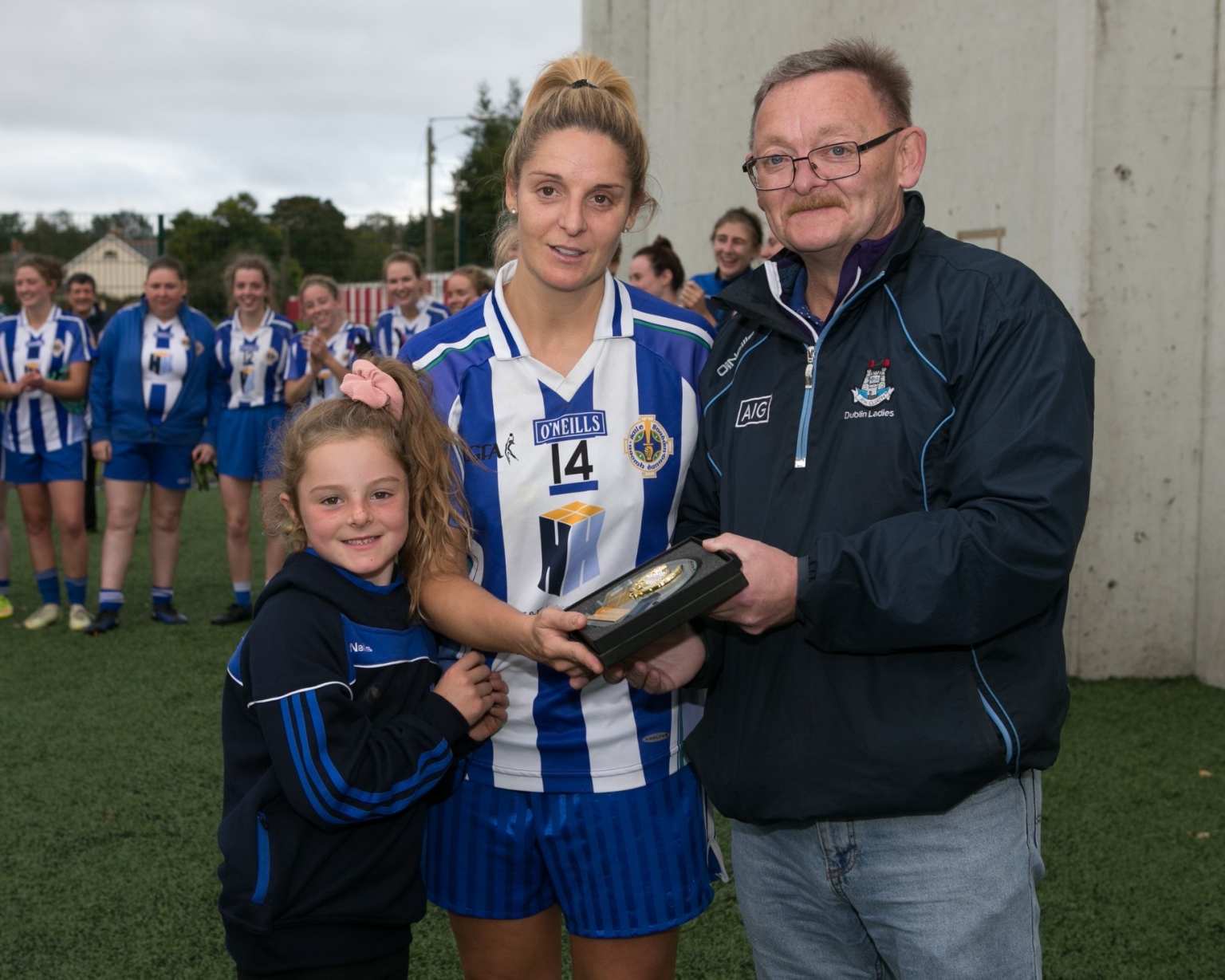 Although Brennan had a shot on goal blocked down, full-forward Sweeney was on hand to fire the resulting rebound beyond the reach of netminder Danielle Aylmer.

This was an early set-back for ‘Boden, but they responded in clinical style.

Having missed an earlier effort at an awkward angle, Kelly split the uprights off a close-range free.

In a significant re-shuffle to their starting line-up, Cathy O’Neill deputised for full-back Roisin Ryan.

With Joanne O’Sullivan, Grace Walsh and Eimear Duffy all dropping into deeper roles, O’Neill was selected on the ’40’ alongside Shauna Maher and Aine Duffy. After receiving a looped pass off Laura Basquel, she cut the gap to the bare minimum on seven minutes.

This was quickly supplemented by an equalising score from Scollard and with Peregrine’s clocking up a series of wides at the opposite end, they hit the front just shy of the first-quarter mark.

O’Neill was once again picked out in space on the right-wing for a well-worked point and Maher joined her on the scoresheet after a Kelly free had dropped short.

Despite securing a firm grip on the scoreboard, there was still reason for ‘Boden to be wary of the threat that Peregrine’s possessed. Brennan was beginning to grow into the game and Sweeney was a livewire presence for her side.

Yet, try as they might, they couldn’t add to the latter’s goal before the half’s end. ‘Boden also passed up some decent opportunities, but Scollard’s second of the tie guided them towards a 0-6 to 1-0 interval cushion.

It was all going according to plan for ‘Boden up to this juncture and when Kelly added three frees in as many minutes on the resumption, they looked set to ease their way over the line.

However, Peregrine’s were not prepared to go down without a fight and forced their way back into contention with a powerful scoring streak. 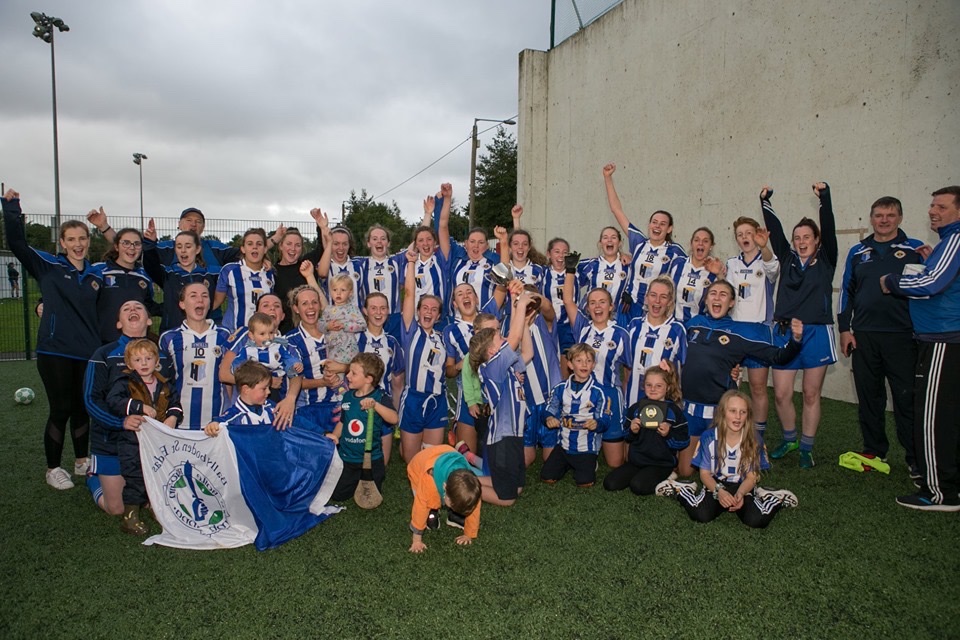 At the end of an incisive run on the right-hand side, Sweeney halted their lengthy drought by kicking over at a tight angle.

The ‘Boden defence were coming under sustained pressure and Brennan’s successful free on the stroke of 45 minutes was an additional boost to their prospect.

There was a sense that Pergerine’s would need a second goal if they were to turn the tables of Ballyboden and they got the score that they desperately craved inside the closing-quarter.

Deegan’s industry was a feature of the Peregrine’s play throughout and at the end of a memorable surge, her speculative shot found its way into the top left-hand corner of the ‘Boden goal.

Back to within a single point of the leaders, Peregrine’s sensed that momentum was now on their side.

They had a number of chances to bring the sides back on level terms, but ‘Boden held firm in a tension-filled finale.

A superb Kelly pass released Scollard for her third point and even though Brennan replied with another Peregrine’s, Kelly’s fifth free of the game was the insurance score for Ballyboden in the end.