20×20 Logo Will Replace AIG Logo On The Dublin Jersey For An UpComing Ladies Football, Camogie, Football And Hurling Fixtures 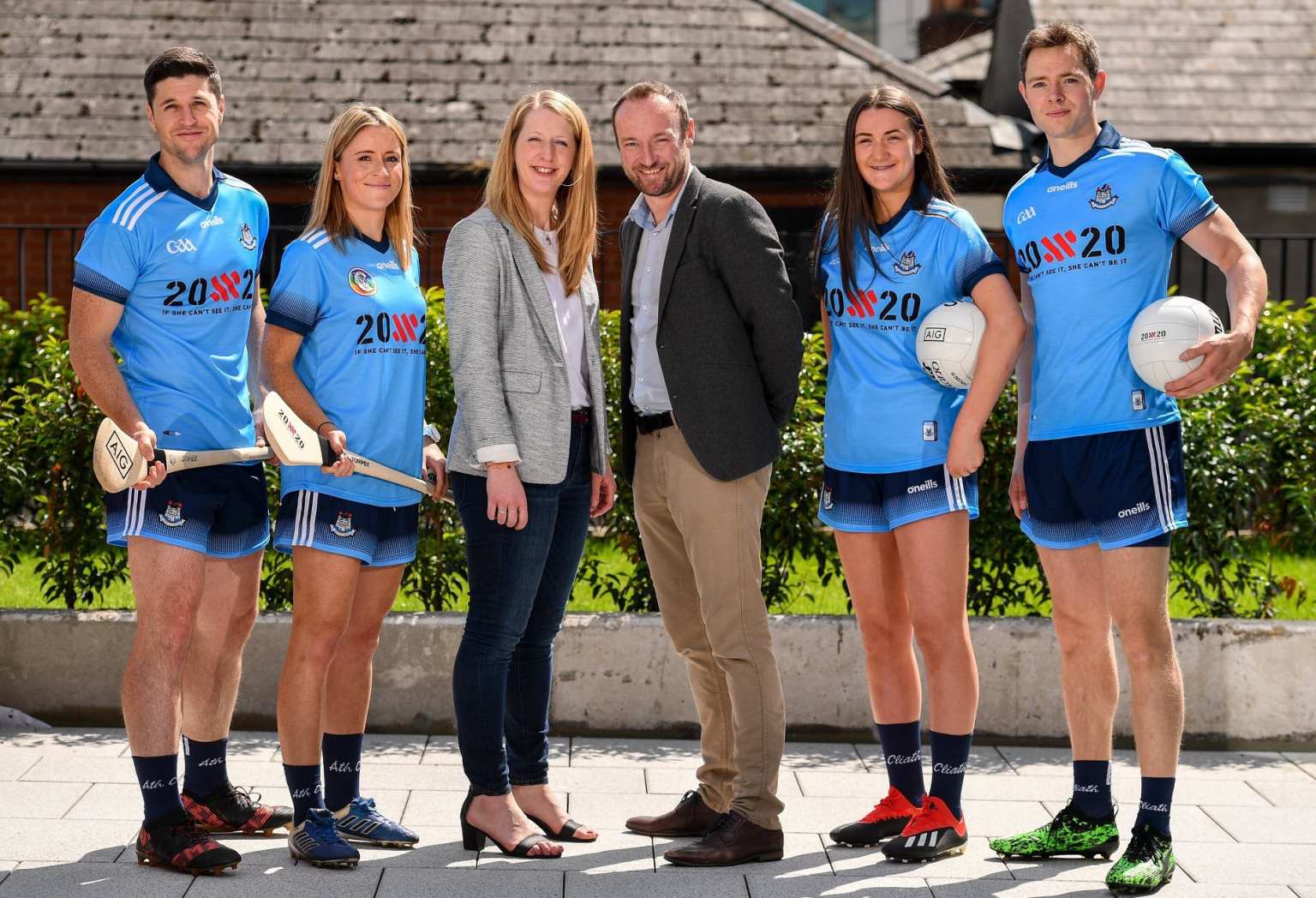 AIG Ireland has today announced that the Federation of Irish Sport’s campaign and movement 20×20 ‘If She Can’t See It, She Can’t Be It’ logo will replace their logo on the front of the Dublin GAA jersey for an upcoming ladies football, camogie, football and hurling fixtures.

The ladies footballers will wear the limited edition jersey against Waterford in the All Ireland Senior Championship on the 13th July, potentially followed by the Dublin Hurlers during their Preliminary Quarter Final game against Tipperary on July 14th, should they successfully beat Laois this coming weekend.

Up next will be the Dublin footballers as they will wear the jersey on 13th / 14th July during their first round All Ireland Senior Championships Quarter Final against Cork or Laois.

The camogie team will don the jersey on July 20th during their All Ireland Senior Championships Group 2 match against Clare at home.

Just as AIG is supporting and promoting #EffortIsEqual across Dublin GAA from grass roots activities to the intercounty stage, it is actively helping promote women in sport nationally with its support of the 20×20 movement.

20×20 is an all-inclusive movement to shift Ireland’s cultural perception of women’s sport by 2020 with:

• a 20% increase in media coverage of women in sport

• a 20% increase in female participation at all levels of sport

• a 20% increase in attendance at women’s games and events

Everyone can get behind the 20×20 movement by pledging to do just one small thing to help start this giant shift for female sport. To learn more about 20×20 log onto www.20×20.ie

The Dublin GAA jersey takeover is just one-way AIG Ireland has backed 20×20 with various other initiatives taking place throughout the year. On International Women’s Day AIG Ireland’s pledge as part of the #ShowYourStripes initiative, was to partner with The Herald to increase their media coverage by 50% of Dublin LGFA & Dublin Camogie in their weekly Official Dublin GAA supplement, to increase the visibility of girls & women in sport in 2019.

“AIG is both delighted and proud to play its part in the development of girl’s and women’s sport in Ireland by being a founding corporate sponsor of the 20×20 movement. I am looking forward to seeing the 20×20 logo on the front of Dublin GAA jerseys across all the four codes, but especially the Camogie and Ladies Football jerseys.”

“Players across the country know how much of an honour and a privilege it is to wear your county colours and on game day all eyes are on them.

To have 20×20 on all four codes of the Dublin GAA jersey shows that the 20×20 movement is all society for all society, not just women for women. It also highlights how sport in Ireland has the potential to influence positive change from the inside out. The kind of change 20×20 wants to bring about will benefit Irish society as a whole.

Thanks to AIG this is a step towards making more people aware of 20×20 and hopefully inspiring them to support women and girls in sport and physical activity in Ireland.”

“The 20×20 logo taking centre stage on all four codes of the Dublin GAA kit reflects the importance of seeing and being role models for women in sport in Ireland. It’s a big moment for 20×20 that amplifies the ‘If She Can’t See It, She Can’t Be It’ message.