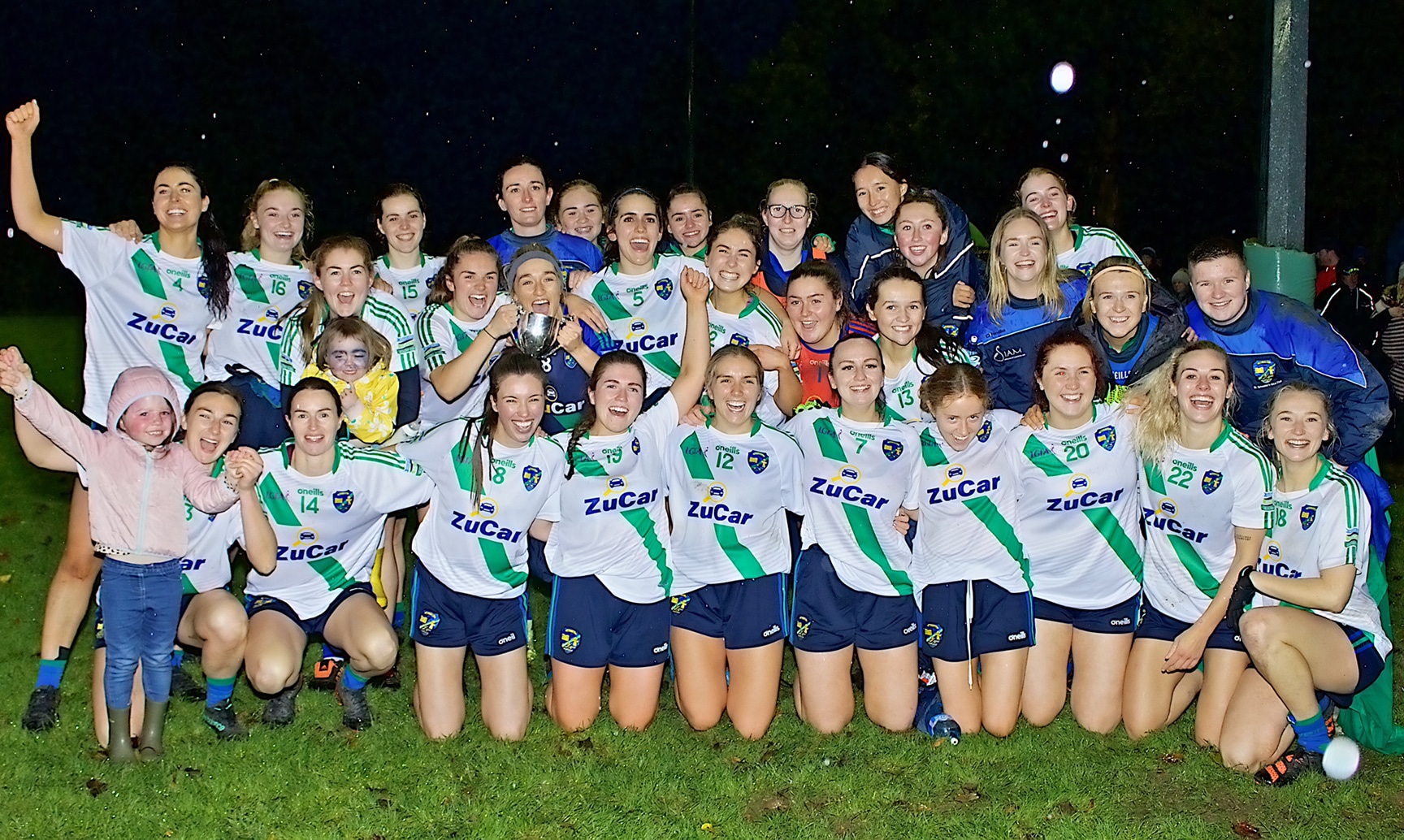 Dublin captain Sinead Aherne struck a superb tally of 3-5 at St Margaret’s on Sunday to propel St Sylvester’s towards a magnificent victory over Castleknock in the Dublin LGFA Intermediate Club Championship final.

Despite making an encouraging start to the action, ‘Knock struggled to contain their rampant and supremely-drilled opponents. Hannah Hanlon (0-4) and Aisling O’Donnell (1-0) did keep them ticking over at times, but it wasn’t enough to curb the Syls threat.

After reaching the knockout rounds of the competition with four consecutive wins in Group A, Sylvester’s found themselves up against 2017 intermediate winners Naomh Maur at the semi-final stage.

Playing on their home pitch of Broomfield, the Malahide outfit emphatically progressed to this showpiece with a 5-15 to 2-7 victory – a game that also saw Aherne rattling the net on three occasions.

Castleknock encountered a sterner resistance from Skerries Harps in the last-four, with Peter McKenna’s side having to dig deep before recording a 2-12 to 2-10 triumph at Somerton Park.

Thanks to two wins and one draw, they had earlier emerged on top of the pile in Group B.

Having gone so close to overcoming the challenge of Cuala in last year’s decider, there was no lack of motivation from a Castleknock point of view.

Their male counterparts have moved impressively through the ranks of Gaelic football in recent years and now the ‘Knock women were looking to add to their 2018 junior title.

They couldn’t have asked for a better start to the contest as the aforementioned O’Donnell shook the net with just 30 seconds gone on the clock. Champions at this grade back in 2012, Syls found themselves under some early pressure.

It wasn’t long before they exerted their authority, however. Following a routine Aherne free, Owens split the posts after having an initial effort charged down. The Syls attack was settling into a familiar rhythm and their maiden goal of the game arrived in the eighth-minute.

The probing McEvoy picked out Aherne close to the target and the 2018 Footballer of the Year was subsequently hauled down inside the square. The seven-time All Star stepped up to the penalty spot and clinically fired beyond the reach of Castleknock netminder Amy Mahony.

This edged Syls in front for the first time and while an Aherne point from play was the only addition to their haul in the remainder of the opening quarter, the floodgates eventually opened.

Aherne contributed a brace of frees and when a second penalty was awarded on 24 minutes – following a foul on McEvoy after she had superbly fielded a high ball – she slotted home to the bottom left-hand corner for her second goal of the half.

Her hat-trick was then complete with four minutes still remaining in the opening period, when she found herself through on goal in open play and made no mistake from close-range.

Sullivan had been an industrious figure in the Syls half-forward line and she raised white flags either side of this latest three-pointer.

Even though midfielder Aisling O’Connor briefly halted their scoring sequence in advance of Sullivan’s second, Castleknock were staring into a 3-7 to 1-1 deficit at the interval.

In the increasingly rain-soaked north county venue, Syls gradually widened the gap between themselves and ‘Knock Owens, McEvoy, Aherne and half-time substitute Emma Sullivan all rounded off excellent team moves with points to convincingly reinforce their superiority on the resumption.

Both sides dipped further into their reserves as the play developed and Grainne McGinty added her name to the Syls scoresheet inside the final-quarter.

This was in response to a two-point salvo from Hanlon, who battled admirably on the Castleknock inside line throughout.

Full-forward Jessica Comerford was another player who foraged impressively, while team skipper Jenny Hickey did as much as she could to stem the tide.

Still, Sylvesters remained in firm control and with Owens exerting a powerful influence around the middle-third, they were aiming to end the day on a high.

The Sky Blues ace added to her tally in the 54th-minute with an outstanding left-footed point on the run.

To Castleknock’s credit, they did try to frustrate Syls in the closing moments of the proceedings. Hanlon (two) and substitute Lucy Quinn knocked over successive points to offer their loyal supporters some degree of solace.

Nonetheless, it was Syls who had the final say as Owens kicked her fourth score deep into stoppage-time.

In addition to the junior championship crowns they accrued in 2004 and 2011, Syls can now include a brace of intermediate titles on their roll of honour.

To date, their only appearance in a senior championship decider was as a combined Naomh Mearnog/St Sylvester’s side in a 2007 defeat to Ballyboden St Enda’s.

Now that they have restored their top-tier status for 2022, Anthony Cooke’s troops can look forward to having a shot at securing a full sweep of county championships.