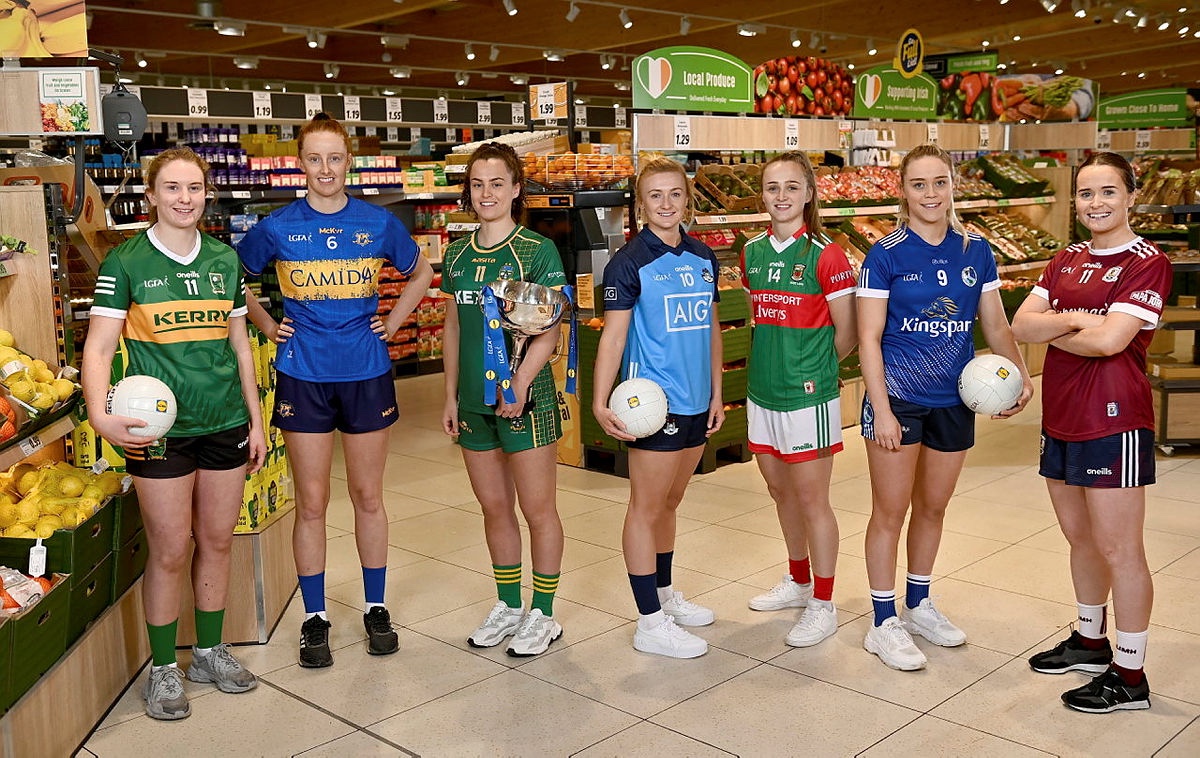 THE 2023 Lidl Ladies National Football League gets underway over the coming weekend – with 14 games pencilled in across the four divisions.

Galway and Donegal have the honour of being the first teams to line out in the 2023 competition when they clash in Division 1 at Tuam Stadium on Saturday (2pm).

That’s followed by another top-flight clash later in the day, with Dublin hosting champions Meath at DCU St Clare’s (5.15pm) in the live TG4 offering: https://www.tg4.ie/en/player/watch-live/

There are two more Division 1 fixtures on Sunday, with Mayo at home to Cork, while Waterford take on Kerry in a Munster derby.

All games bar the live TG4 match are available to view via the LGFA’s live-streaming portal: https://bit.ly/3k9k8CB

All fixtures 2pm unless stated

The Ulster outfit lost the provincial final to Armagh, were pipped by champions Meath in the Lidl NFL Division 1 decider, and lost out to the Royals again in the TG4 All-Ireland SFC semi-final.

But there’s a feeling in the Donegal ranks that they’re right up there in the mix and there have been no high-profile departures and a desire to go again.

Donegal’s League campaign begins against Galway in Tuam on Saturday, with the hosts minus a host of their Kilkerrin-Clonberne currentaccount.ie All-ireland Senior club winners.

Lynsey Noone does start at corner forward, with Chloe Miskell on the bench, but more KC players will ease their way back into the county set-up over the coming weeks.

An interesting tie lies in store between two counties who will look to have a big say in the race for silverware in 2023.

Quite the rivalry has developed between Dublin and Meath in recent times.

A bumper crowd was present at Páirc Tailteann for a 2022 NFL League fixture, won by a late Hannah Tyrrell free, and the sides met twice in the Leinster championship – sharing a win each, with Dublin claiming the provincial crown.

Meath claimed both of the big national prizes on offer last year, however, landing the Lidl NFL Division 1 and TG4 All-Ireland Senior titles, with the Sky Blues looking on enviously.

The first meeting between the counties in 2023 will receive the live TV treatment at DCU St Clare’s – and both counties will be anxious to get off to a winning start.

There’s plenty of experience in both teams but a number of first-teamers are unavailable too.

Carla Rowe will captain Dublin in 2023 and was in super form last year, despite Dublin’s exit at the TG4 All-Ireland SFC quarter-final stage.

For Meath, this is a first competitive game in charge for new manager, Davy Nelson.

Mayo and Cork last met in a competitive fixture in the 2022 TG4 All-Ireland SFC quarter-final – a tie won by Mayo in scintillating fashion.

Mayo lost out to Kerry in the All-Ireland semi-final and Sunday’s opponents will be itching to get going in 2023.

Mayo boss Michael Moyles welcomes Sarah Tierney and Rachel Kearns back into his set-up, and they’re joined by returning Clodagh McManamon and Deirdre Doherty to bolster the green and red ranks.

Mayo and Cork are two counties who will expect to compete for the top honours in 2023 – and this looks like being another wide-open season.

The Connacht Centre of Excellence is the venue for a 1.30pm start on Sunday.

Kerry’s sensational 2022 season has them harbouring hopes of more glory this year.

The Kingdom beat Armagh to capture the Lidl NFL Division 2 crown and book a safe return to the top flight, following relegation back in 2018.

A TG4 All-Ireland Senior Final appearance ended in disappointment against Meath but huge progress was made and joint managers Declan Quill and Darragh Long will be confident of building further.

In a competitive Division 1, Kerry will look to consolidate first and foremost but a crack at the top prize is not beyond the bounds of possibility.

Opponents Waterford needed a relegation play-off to survive last year and they’ll look to stay up again as the priority target.

Kerry have listed seven players who started the 2022 TG4 All-Ireland Final as they seek a winning return to Division 1.

Armagh are a team that have the potential to achieve big things under new manager, Shane McCormack.

The Orchard County contested a Lidl NFL Division 2 Final in 2022 but lost out to Kerry, before landing the Ulster title.

Defeat to Kerry in the TG4 All-Ireland senior quarter-final was a disappointing setback but Armagh are once again a team to watch in 2023.

Opponents Cavan have home advantage for this one but they were well beaten by Armagh in last year’s League tie.

Monaghan were relegated in 2019 but they produced a gutsy display against Kerry in last year’s Division 2 semi-final, losing out by just three points.

It’s a period of transition for Monaghan but there are promising players coming through from the underage ranks and this proud county will rise again at senior level.

Laois suffered a chastening League semi-final loss to Armagh in 2022 but recovered to enjoy a brilliant summer that ended with TG4 All-Ireland Intermediate glory.

The O’Moore County have home advantage for this one and it’s a very difficult game to call.

The return of Aishling Moloney following long-term injury is a massive fillip to Tipperary as they prepare to welcome Westmeath to Fethard.

It’s not too long ago that these counties were meeting in Division 1 – in a 2021 relegation play-off – and now both counties are battling to get back into the top flight.

Tipp went down in 2021 before Westmeath were consigned to Division 2 by Waterford in a play-off last year.

Westmeath also lost their Senior Championship status last year against Cavan but the Lake County now have the space to rebuild and look ahead to a new era.

The Red Hands started as one of the favourites for the TG4 All-Ireland Intermediate title too but exited the competition at the quarter-final stage.

Tyrone will look to get off to a positive start in 2023 but they’ll get nothing easy from newly-promoted Roscommon.

Victory over Wexford in the 2022 Division 3 Final was a highlight moment for the Rossies, who also contested a TG4 All-Ireland Intermediate semi-final.

Down, too, reached the last four in the third tier, but their hopes of League glory were dashed by Wexford in the semi-finals.

Two counties who will harbour high hopes of having another good League campaign meet at St Conleth’s Park, with Kildare now under the tutelage of former Mayo star, Diane O’Hora.

Both counties struggled in their respective Division 3 groups last year – and will strive for better campaigns this year.

Louth survived in Division 3 after defeating Wicklow in a relegation play-off, as Longford’s victory over Wicklow in the group stages as good enough to keep them out of relegation trouble.

There’s plenty of talent in both sides, however, but this season opener already has a really significant feel to it.

A couple of draws were good enough to stave off the threat of relegation for Sligo in 2022.

Clare, meanwhile, dropped down from Division 2 after losing out to Tyrone.

Both of these counties will be hoping to push towards the top of the end of the table – and a good start is crucial.

Wexford lost out narrowly to Roscommon in last year’s Division 3 Final and, after reaching another TG4 All-Ireland Intermediate Final, they’ll look to be among the front-runners in the hunt for national silverware again.

Offaly defeated Limerick in the 2022 Division 4 Final to secure Division 3 football – and they’ll be keen to stay up at the very least.

Both sides operated in Division 4A last year – and with contrasting fortunes.

Derry failed to register a point while Leitrim topped their pool before losing out in a classic semi-final to Offaly after extra-time.

It’ll be a tough opener for the Cats, however, as they come up against 2022 Division 4 runners-up, Limerick, who’ll be anxious to go one step better and claim this year’s title.