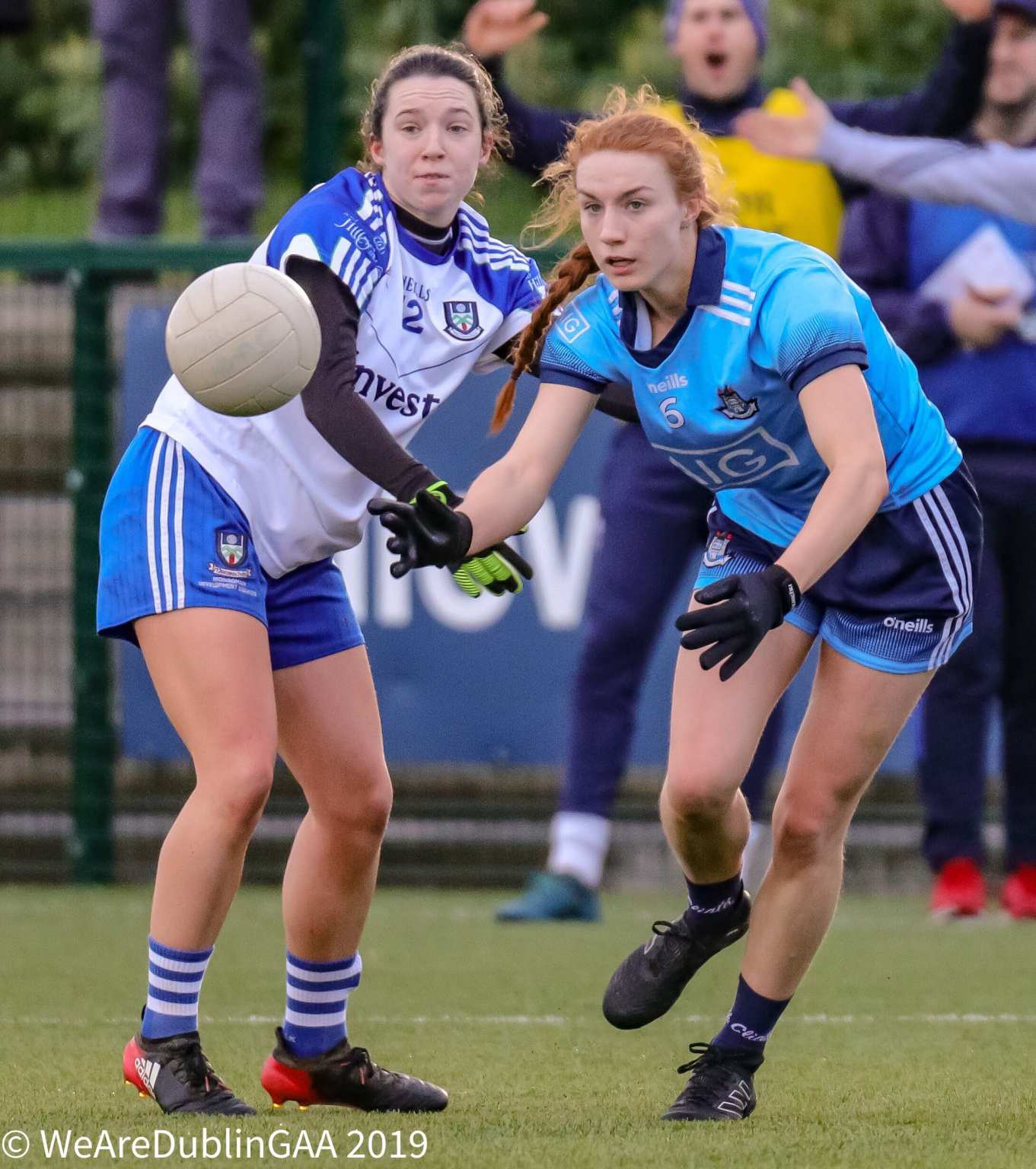 IT’S crunch weekend for the competing teams in the 2019 TG4 All Ireland Senior and Intermediate Championship, with quarter-final pairings to be decided.

Galway are the only county who are guaranteed a slot in the last eight at the start of play in Round 3, although Cork and Dublin look safe mathematically.

The LIVE TG4 double-header comes from Bord na Móna O’Connor Park on Saturday, where Donegal and Mayo meet in a do-or-die Group 4 clash, before Armagh take on Cork.

Also on Saturday, champions Dublin entertain Monaghan while Westmeath make the trip to Kerry on Sunday for a winner-takes-all fixture.

There’s one fixture in the TG4 All-Ireland Junior Championship on Saturday, as Louth entertain London at Clan na Gael in Dundalk, a game that will be streamed LIVE on the LGFA Facebook Page: https://www.facebook.com/LadiesGaelicFootball/

Also on Saturday, Leitrim meet Offaly in Group 4 of the Intermediate Championship for the right to join Roscommon in the quarter-finals.

The remaining Intermediate Group fixtures will all be played on Sunday, along with the meeting of Antrim and Fermanagh in the Junior Championship, as the counties meet for the fifth time this year in a competitive fixture.

2019 TG4 All Ireland Senior Championship – Round 3

Champions Dublin have home advantage for a tie they’re tipped to win with plenty to spare.

Dublin had 18 points to spare against Waterford in their group opener, before Waterford saw off Monaghan by 27 points.

Following that line of form, this could be a difficult afternoon for Monaghan, who will be plunged into a relegation battle unless they pull off a major shock, and win by a large margin.

It’s been a difficult season for Monaghan, who were also relegated from Division 1 of the Lidl National League, but this is a proud bunch and they will fight until the end against Dublin.

If Dublin finish, as expected, finish on top of the table, they’ll meet the winners of Sunday’s fixture between Kerry and Westmeath in the quarter-finals.

What a tie we have in prospect here. It’s all on the line for Donegal and Mayo as they lock horns in Tullamore, and not even a victory might be good enough for Donegal to advance.

They have to win by four points or more to guarantee a safe passage to the last eight – while a three-point win for Maxi Curran’s side would see Donegal, Tyrone and Mayo all locked together on three points, and on a zero scoring difference.

In that case, a play-off situation will be required to determine the two quarter-finalists from Group 4.

The LGFA has confirmed that, in the case of a three-way tie, a draw will take place, with the first team out finishing second in Group 4, and playing against the Group 1 table-toppers in the quarter-finals.

The remaining two teams will play off, for the right to finish first in Group 4, on Sunday, August 4, at 2pm.

The winners of that play-off game would then play on August 10 in the All-Ireland quarter-final, against the second-placed team from Group 1.

A potential play-off tie would be played at a neutral venue, with a result on the day.

Donegal are the reigning Ulster champions but they were shocked by Tyrone, who they had beaten in the province, in the group stages of the All-Ireland series.

Armagh welcome back Caroline O’Hanlon from World Cup duty with Northern Ireland netball team for this one.

But the Orchard County face an uphill task if they’re to make the quarter-finals.

Cork walloped Cavan by 20 points, while Cavan edged out Armagh by just a single point in a game that was tipped to be the battle for second spot in this group.

A win for Armagh would see them through along with Cork but on the evidence we’ve seen to date, it’s a big ask for the Ulster side.

When the sides met in the group stages last year, Cork ran out 12-point winners and the Munster champions are arguably a more formidable force this year, and with their sights very much set on dethroning Dublin as TG4 All-Ireland senior champions.

2019 TG4 All Ireland Intermediate Championship – Round 3

Leitrim and Offaly meet on Saturday in a straight shoot-out to determine who goes through alongside Roscommon in Group 4.

The Rossies have won both of their fixtures, by 18 points against Leitrim and 16 in the Offaly game.

That would suggest that there will be little to separate Leitrim and Offaly in this crucial tie.

2019 TG4 All Ireland Junior Championship – Round 2

Louth are many people’s favourites to lift the TG4 All-Ireland Junior crown in September.

Beaten finalists last year, the Wee County got their Group A campaign off to a comfortable start with a 16-point win over Carlow.

London get their championship season underway with a visit to Dundalk and, as they’re an unknown quantity, the 2018 semi-finalists will present a threat to the hosts.

2019 TG4 All Ireland Senior Championship – Round 3

It’s win or bust for both sides as they prepare for this Group 3 encounter.

Both teams have lost out to table-toppers Galway, who are safely through to the last eight, and now the battle is on for the runners-up spot.

Kerry won’t need reminding that they lost out to Westmeath in 2018 in Division 1 of the Lidl National League, a result that saw the Kingdom relegated from the top flight.

Searching for a line of form here, Kerry put up the better fight against Galway, losing out by four points, while Westmeath finished 13 points behind the Tribeswomen.

Given the winner-takes-all nature of this fixture, it’s certain to be keenly contested and Fitzgerald Stadium in Killarney will provide the venue befitting of the occasion.

2019 TG4 All Ireland Intermediate Championship – Round 3

Sligo, who recently underwent a change in management, are currently second in the standings ahead of a home fixture with bottom of the table Limerick, who look set for a relegation battle after being promoted to the Intermediate grade following the 2018 All-Ireland Junior win.

Sligo won’t take Limerick for granted, and the Shannonsiders will want to finish their campaign on a positive note, while a win could yet see them avoid a relegation scrap.

This is a group where Kildare, Sligo and Down could yet all finish on six points, which would see two from three advance on score difference.

Kildare will be guaranteed of a quarter-final slot should they win this one, and they’ll finish on top of the pile with three wins from three.

A win for Down, and a win for Sligo against Limerick, would see three teams locked together on six points.

Kildare and Sligo both have a +14 score difference, with Down on -11.

But the Mourne County were much improved against Limerick, having lost out to Sligo in Round 1, and they’ll travel to Newbridge with quiet optimism.

Wicklow are joint-bottom of the table on a single point alongside Longford – and they’ll be facing into a relegation play-off if that remains the case after the weekend.

Wicklow drew with Longford in the group stages but, under rule, Longford would be safe having kicked more points over the bar (16) than Wicklow (10) in that fixture.

The omens are not good for Wicklow, who desperately need a result, as championship favourites Tipperary have enjoyed big wins against Meath and Longford to date in this group.

Meath recovered from a sobering experience against Tipperary in Round 1 to see off Wicklow comfortably last time out.

And another win against Longford will see the Royals safely through to the last eight.

Longford could do with taking something from this fixture to be assured of safety from relegation but the fact that they scored more points than Wicklow in the draw between the counties looks set to save them in any case.

A win for Laois would see all three teams in the group locked together on three points in the standings.

In that case, score difference will decide who goes through, with Laois currently on –10 compared to Wexford (+3) and Clare (+7).

It will require something special from Laois, who have lost all of their competitive fixtures in 2019, to prevent Wexford and Clare from progressing.

2019 TG4 All Ireland Junior Championship – Round 2

For the fifth time this year, Antrim and Fermanagh meet in a competitive tie.

They met twice in the Lidl National League, including a Division 4 Final, and in the group stages of Ulster. Fermanagh won all three of those games but Antrim turned the tide in the provincial final.

A win for Antrim here would see them through to the All-Ireland semi-finals, and leave Derry and Fermanagh to battle it out for second spot in the final group game.

DUBLIN BLITZ MEATH IN SECOND HALF TO CLAIM LEINSTER TITLE