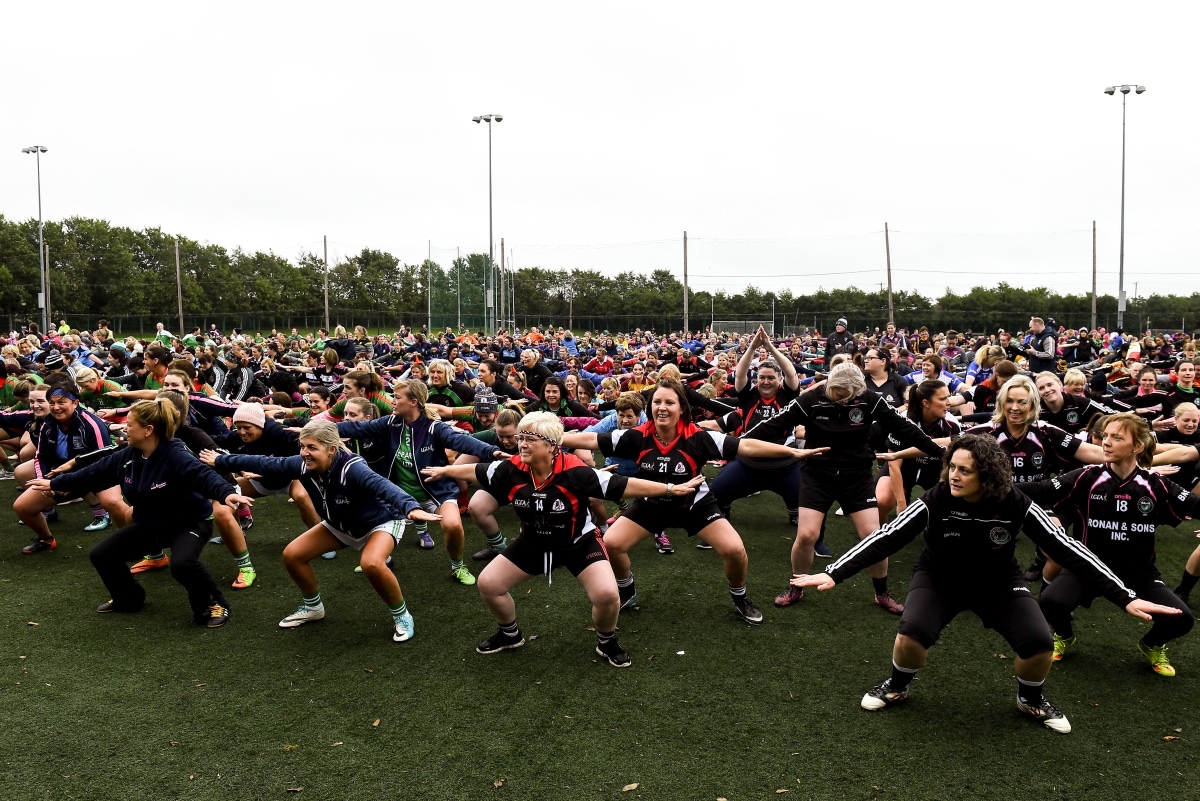 OVER 2500 women descended upon the Naomh Mearnóg and St Sylvester’s GAA Clubs in Dublin last Saturday (October 5) for the 2019 Gaelic4Mothers&Others National Blitz Day.

The massive attendance made this year’s event the biggest and best yet, with 120 clubs making the trip to north Dublin for a jam-packed day of football, fun and musical entertainment.

The Blitz day was completely recreational, with all players and mentors asked to play in a fun and ‘fair play’ manner.

This was a day for camaraderie, not competition, and no scores were recorded.

At this massive family-orientated event, the festival atmosphere was simply electric and after we asked teams to bring supporters, they responded in their droves.

2FM were also there, and Bokwa Ireland were on hand to oversee another memorable mass warm-up, one of the real highlights of the day.

After the football, participants and supporters enjoyed live entertainment, while a number of exhibitors took the opportunity to avail of the Exhibition Village on site.

Once again, the LGFA was fully subscribed, and with a large number of teams on a waiting list.

The Gaelic4Mothers&Others programme is having a massive impact all over the country, with new clubs sprouting up at a phenomenal rate.

The LGFA would like to thank all players, coaches, officials, Lei and crew from Bokwa Ireland and the 2FM Roadcaster for making this day such a great success once again.

We would also like to extend a special word of thanks to our magnificent hosts at Naomh Mearnóg and St Sylvester’s, who ensured the smooth running of the annual event, while the many volunteers present gave freely and selflessly of their time.

Despite inclement weather conditions, the 20 pitches were in immaculate condition and great credit is due to both clubs for ensuring that this was the case.

The Gaelic4Mothers&Others initiative is an innovative way to introduce mothers and other women to playing Ladies Gaelic Football.

Mothers often drop their kids to training and call back to collect them, but the Ladies Gaelic Football Association is endeavouring to change that.

Gaelic4Mothers&Others provides an opportunity for women to get their recommended weekly exercise in a fun way while meeting other mothers in the area.

The initiative has proved hugely popular with women of all ages and has taken off in all 32 counties with success stories popping up all over the country.

There is one provincial blitz organised in each province every year and the National Blitz day, which was once again a resounding success.

This Weekend’s TG4 All Ireland Series Round 1 Match Previews