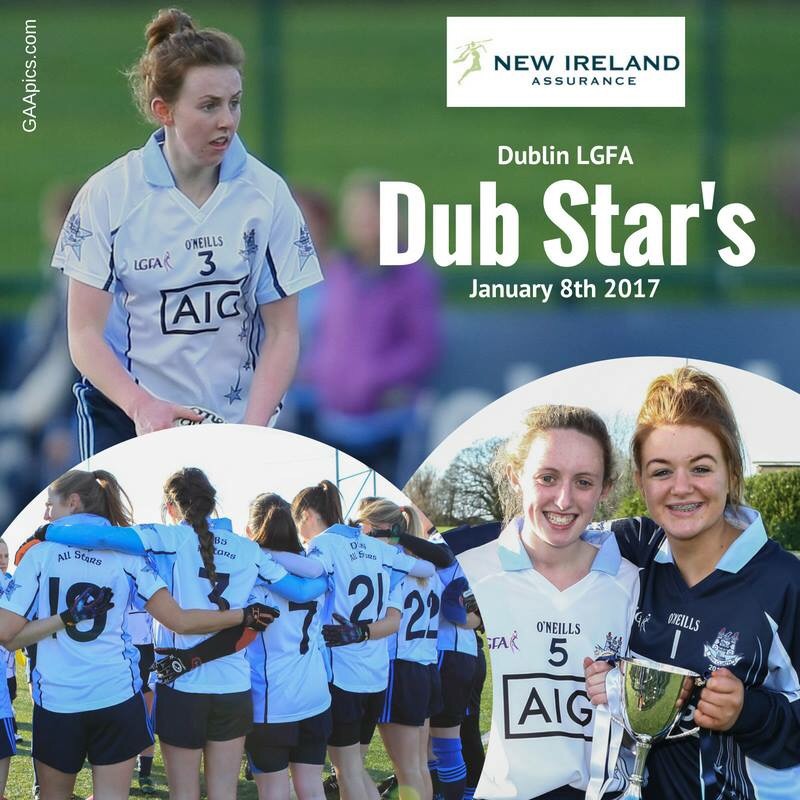 The panel that will take on Dublin in the New Ireland Assurance sponsored Dub Stars event of 2016 has just been announced. As anticipated Dublin senior club champions Foxrock Cabinteely who had a remarkable season capturing both county and provincial crowns on route to a historic first All-Ireland final appearance, led the way with six players. All Ireland Junior and Leinster champions St Maurs along with Leinster Intermediate runners up Clanna Gael Fontenoy have four representatives apiece on the panel.

St Brigid’s, Kilmacud Crokes, Fingallians and Clontarf are next with two players each.  In total ten clubs are represented as Ballyboden St Endas, Thomas Davis and Castleknock each provide a representative on the 25 strong panel.

Former All Ireland winning minor captain, Emma McDonagh (Foxrock Cabinteely) will lead the Dub Stars out against five in a row Leinster champions, Dublin at 1.30pm on January 8th in DCU, St Clare’s.

The Dub Stars event is the traditional first outing of the new season and as such the senior game can be a competitive affair with both sides not wanting to give an inch as bragging rights are very much up for grabs!

This latest contest will certainly offer new Dublin boss, Mick Bohan with an opportunity to see some of his charges in action ahead of Dublin’s opening LIDL NFL fixture versus Monaghan which is scheduled to take place on January 29th next.

There will be plenty of football action on display in DCU on January 8th as the senior contest will be preceded by the Junior Dub Stars game which gets underway at 11:30am. The inaugural Junior Dub Stars match took place last year and was a tremendous success so much so the panels have been increased to 25 this season to include 50 players representing 37 junior clubs from right across the County.  Both Junior Dub Stars panels will be announced in due course.

Each player chosen on the Dub Stars and Junior Dub Stars panels will each receive a full Dub Stars kit along with a specially commissioned Dub Stars commemorative medal.

Admission to the Dub Stars event on January 8th in DCU will be free of charge however patrons will be encouraged to support a bucket collection in aid of the official charity partner of Dublin LGFA, Aoibheann’s Pink Tie.