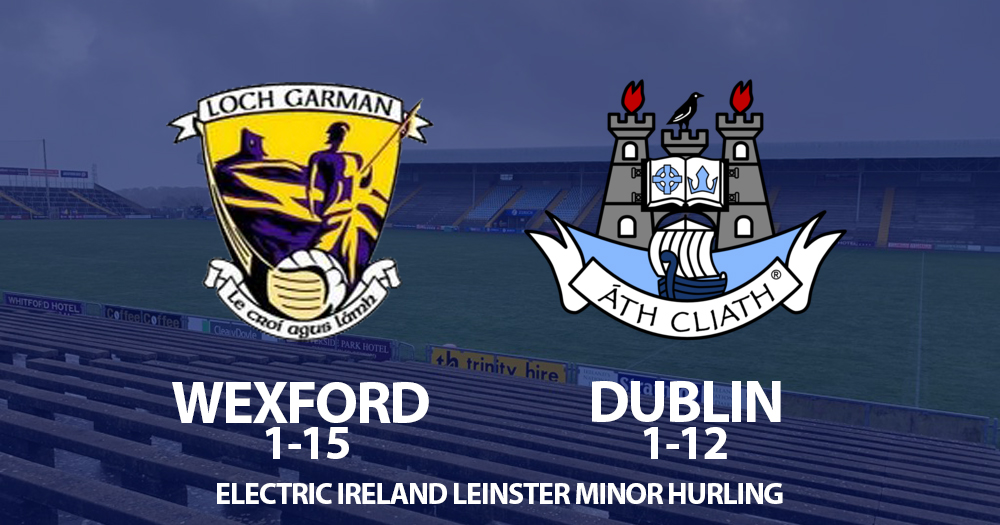 The home side came out on top in last night’s Leinster Minor Hurling Semi Final, as Wexford edged out Dublin with three points to spare. And is was the accurate free taking of Luke Roche that was the difference between the sides in a very tight game.

A strong third quarter saw Wexford outscore the Dubs by 0-05 to 0-02, and they held that advantage going down the home straight to set up a Leinster Minor decider with Kilkenny next week.

Wexford had moved 0-05 clear wiht minutes to go, and despite two scores from Dennis McSweeney Dublin could close the gap any further, as the vital goal just didn’t come.

Spoils Shared in an intentsely tight first half

Nothiing seperated the sides at the half time break with both teams locked at 1-07 each. Roche opened the proceedings with the first of his 0-09 tally after 3 minutes. But Dublin pounced scoring three points through Ben Gaughran (2) and Diarmuid O Dulaing. Two further scores from Roche had pulled Wexford level by the seventh minute.

The Wexford men could have pushed on further a minute later if not for the defensive work of Barry McGuire to clear the line. And McSweeney gave Dublin an advantage before the first half water break after some clever link up play in the Dublin forwards.

Simon Roche had swung the advantage back in Wexford’s favoue within two minutes with a goal of their own. And the sides were level again by the half time whistle.

Darby Purcell and Conor Dolan had exchanged early second half points. But Wexford took the initiative with three consecutive points through Roche, Cian doyle and Luke Murphy, to lead 1-11 to 1-8, after 41 minutes. They were 1-15 to 1-10 the better with five minutes remaining, but a late Dublin flourish produced two McSweeney points. However, the home side held on to the victory despite a tense finale.