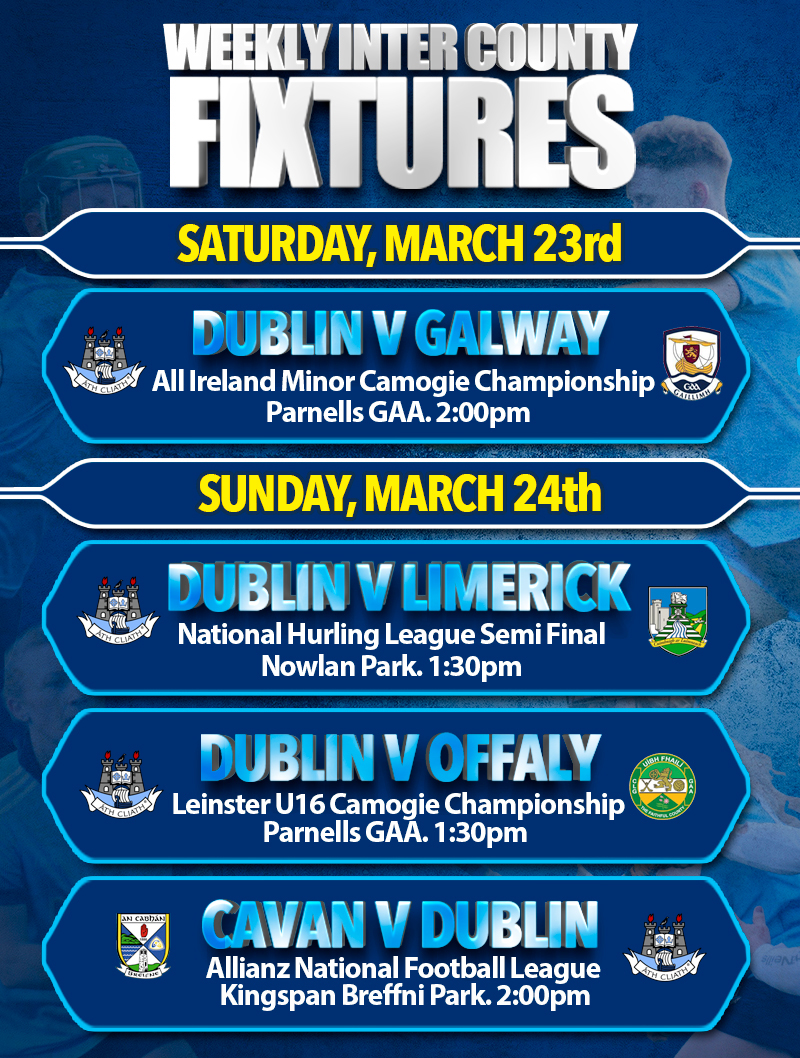 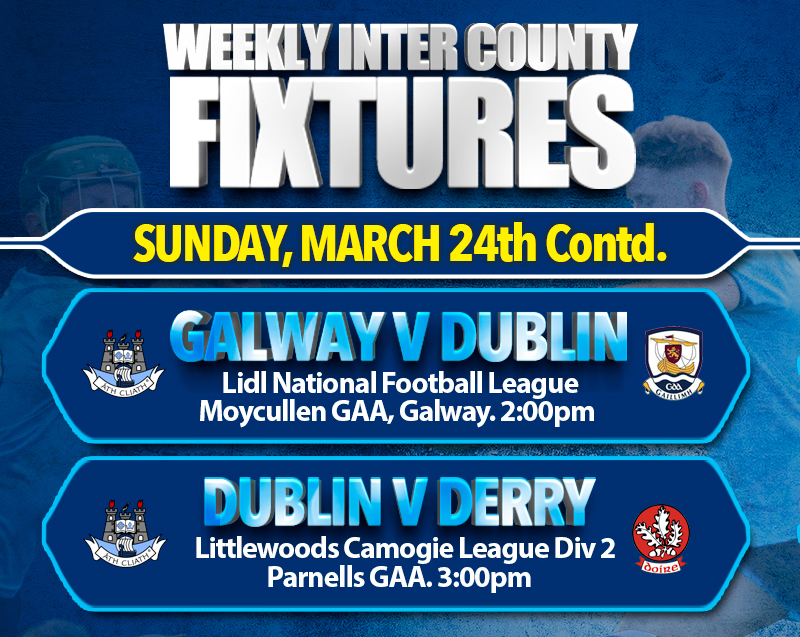 Another weekend of big highs and big lows as we recover from the Dublin Senior Footballers defeat to Tyrone in Croke Park. On Monday, Dublin’s Minor Ladies Football panel suffered their second Leinster Championship defeat, meaning there will be new champions this year. But on the plus side the Senior Ladies won comprehensively against Monaghan in the Lidl National Football League. The U14 girls were 3-07 to 0-07 winners over Westmeath in Leinster. And of course Dublin’s Senior Hurlers pulled off a massive victory over Tipperary to advance to the National Hurling League Semi Finals.

So let’s set you up for this weekend and give you all the details.

Back at the end of February, Willie Braine’s Minor Camogie Panel couldn’t have asked for a better start to this year All Ireland Camogie Championship. With Parnells as the venue, Dublin put in a hugely convincing performance against Wexford, winning on the day by 2-14 to 0-11. Goals from Gaby Couch and Niamh Comerford helped the girls to victory, along with the amazing free taking of Cliodhna Nicoletti.

Two weeks later however, the Dubs came crashing back to earth when they visited the Ragg to face Tipperary in Round 2. Despite a valiant effort in the second half, Dublin came up short against a very tough Tipp side by 3-14 to 2-09. Tipperary had ran riot in the opening half and the deficit was always going to be difficult to claw back.

This weekend it’s their third game, against Galway back on home turf. This is Galway’s first run out, with their opening two games postponed. So it will give the Dublin manager a good sense of where his side are before their final game in Cork.

It’s been some time since we’ve been in this situation but Mattie Kenny has steered his hurling panel to a league Semi Final in his first year in charge. And the All Ireland Champions Limerick will be waiting to face them this weekend at the Kilkenny venue.

Dublin put in a monumental battle last Saturday against Tipperary and came back from Thurles the victors for their first time there since 1946. Retribution for their Quarter Final defeat to the Premier County in Croke Park last year. This weekend poses another huge ask for the boys in blue but one that Kenny and his side will be relishing the thoughts of.

Throw in at Nowlan Park on Sunday is 1:30pm

A new Championship begins this weekend as Dublin’s U16 Camogie panel get the Leinster Campaign underway, with a home tie against Offaly. After that they’ll face Kilkenny at home and then hit the road to play Wexford in their final round game before the knockout stages.

In last years Championship, Dublin beat Offaly by 1-11 to 0-05 in St. Davids, Artane to clinch a championship final slot. Kilkenny were their opponents and sadly Dublin lost out on the silverware, but a new year and a new panel will hopefully get them over the line.

Throw in on Sunday in Parnells is 1:30pm, and is part of a double header with Dublin’s Intermediate Panel facing Derry in the final league game.

It’s the final round in this years National Football League. And following previous results, Dublin already know they will not qualify to retain their League title. But no doubt Dublin manager Jim Gavin will use Sunday’s trip up north to have a final look at some players before choosing his championship squad.

For Cavan there’s little at stake as they sit at the bottom of Division 1 and a win won’t help their cause much as they face relegation along with either Roscommon or Monaghan.

Breffni Park is the venue with a 2:00pm Throw In Time

It’s a massive game for Mick Bohan’s Senior Panel and a trip to Moycullen this weekend could see Dublin steal some valuable points from league leaders Galway. Galway are unbeaten and are three points clear of Dublin in the table but that could all change as Dublin are gaining more momentum as the fixtures pass.

Last weekend saw the girls in blue comfortably beat Monaghan in DCU, with their opening day loss to Donegal well in the past. Wins against Tipperary, Westmeath and Monaghan have put the in the perfect position ahead of this weekend’s game, with only Cork to play after that before the knockout stages. Dublin would love nothing more than to retain their League Crown ahead of this year’s Championship

Throw in on Sunday in Moycullen is 2:00pm

Luck certainly hasn’t gone the way of Dublin’s Intermediate and reigning Premier Junior Camogie Champions. As they head into their last league fixture, they’ve yet to claim a first win. Defeats to Antrim, Laois and Kilkenny have Dublin at the bottom of the Division 2 table facing relegation. And a win against Derry will only see them draw level on points with either Laois or Antrim who face each other this weekend.

It would be great to see the girls clinch a victory this weekend even if it still means a fight for their safety.

And that’s the weekend wrapped up. Make sure to stay tuned for updates on all the above fixtures right here on www.wearedublin.com