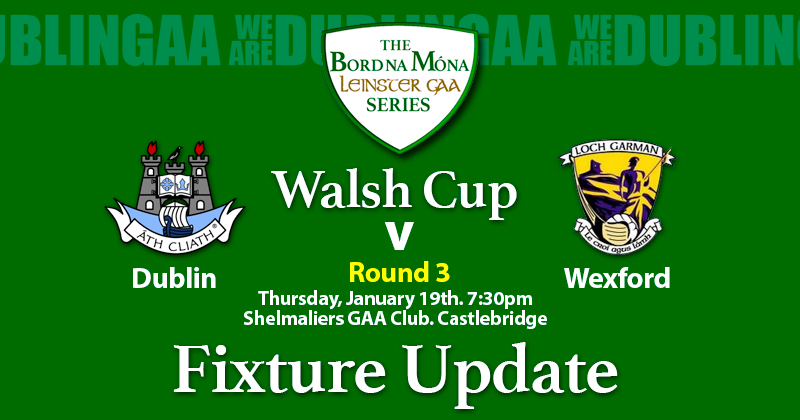 Originally scheduled in the calendar for Sunday January 22nd, Dublin’s third round Walsh Cup game against Wexford will now be played on Thursday, January 19th at 7:30pm in Shelmaliers GAA club in Castlebridge.

Ger Cunningham’s panel are two for two in the competition after a very strong victory over UCD in Parnell Park last night, and with Wexford expected to beat Carlow this Sunday in Netwatch Cullen Park, there will be everything to play for with a Semi Final place at stake. And based on the hammering Wexford gave UCD in their opening game, this will be no cake walk for Dublin.

Dublin and Wexford are in Group 3, and they will face the winners of Group 2 in this year’s Semi Final. Group 2 consists of Kilkenny, Westmeath, Antrim and DCU.

Should Dublin be successful against Davy Fitzgerald’s Wexford next week, they’ll have the opportunity to call on all Dublin players who had previously played for their colleges in the round phases, provided of course a college is not still in competition for a knock out spot. And as such this would be the perfect opportunity for Cunningham to watch some more potential addition to his starting line for their first league outing against Tipperary in Croke Park on February 11th.