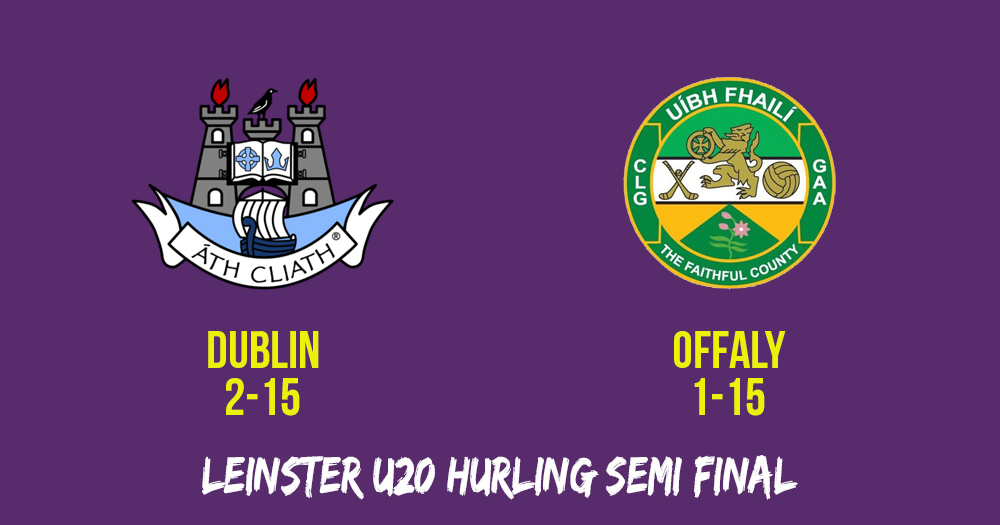 Dublin advance to another Leinster U20 Hurling Final tonight, despite Offaly coming alive in the closing stages of their Semi Final in Parnell Park. And it’s a repeat of the recent 2020 FInal as they’ll face Galway one more time for the provincial crown.

A Charlie Mitchell goal followed by points from Joe Ryan, Ronan Cleary, Cathal Kiely and Niall Lyons had put Offaly within a point of Dublin with a minute of normal time to go in the game. Dublin substitute Cian Boyle pushed Dublin’s noses back out at the beginning of the 6 minutes additional time. Boyle was clear one on one with Offaly Keeper Adam Fitzgerald at the death but the ball was parried out for a ’65 that Ciaran Foley converted to seal the victory for Dublin and secure a place in another Leinster decider.

Eight points clear at the second half water break Dublin had dominated huge periods of tongights game. Goals from Ciaran Foley and Dara Purcell had solidified the foundation laid in the opening half. But Mitchell’s goal was the catalyst for Offaly to gon on an unanswered run of four points, nearly upsetting the party. But Boyle and Foley finished out the game.

Dublin dominated first half before Offaly sprung into gear

Dublin had registered 1-03 inside the opening 5 minutes before Offaly got a score on the board. Liam Dunne, a Foley free and a Dara Purcell effort had flashed the board before Purcell pounced on a mistake by Offaly Keeper Adam Fitzgerald and batted the ball into the net.

Jack Screeney opened Offaly’s account with a pointed free, but Dublin responded with Purcell finding his range again twice. Screeney was the key to keeping Offaly in the board, converting three dead balls to make the scoreline 1-05 to 0-04 in favour of the home side.

A Purcell effort off the posts saw Fitzgerald release the ball to DJ McLoughlin who launched a massive point conversion from the middle of the park. And Screeney was on target again to leave 2 between the sides at the first half water break.

After Foley resumed the scoring with a free, he also took the role of penalty taker after a foul in the square and sent it past Flanagan into the net for Dublin’s second goal. And the ball could have been in the net again when Foley made a clever pass to Purcell who hit the ball at an upward angle and saw it drift over the bar.

Another Screeney free and a big score from play from Cian Burke kept Offaly ticking over. But 2 more scores from Purcell either side of a Foley free saw Dublin go into the break ahead by 7 on a 2-09 to 0-08 scoreline.